This week, in New York, countries across the globe are meeting at UN headquarters to negotiate the next steps towards high seas protection. Unless action is taken by governments to restore and protect the health of our oceans, our oceans will be unable to sustain life on Earth.

The UN is the only international body which can decide on an agreement to protect marine life found in our common waters -- those vast areas of sea that reach far beyond the horizon of our beaches. 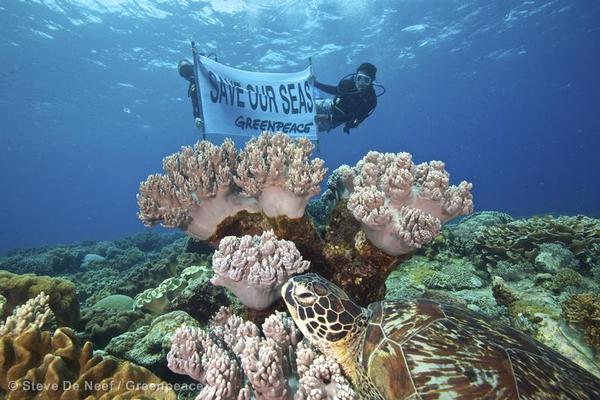 Greenpeace divers together with scientists from Silliman University, the Marine Protected Area Management Board and Apo island dive wardens, unfurl a banner reading "Save our Seas" © Steve De Neef / Greenpeace.

Imagine this scene: You dive down into the deepest ocean, to an environment less explored than the dark side of the moon. Underwater volcanoes are spewing hot lava and exotic fish are swimming past. Nearby, three vast underwater machines, 350 tonnes each, are gouging chunks out of the seafloor. They are mining minerals which are being sent up to a monster-sized ship on the surface.

This is not the trailer for a new science fiction movie by James Cameron. And while activities will take place in the cold dark depths of the ocean, deep-sea mining is a hot issue.

Deep down below the ocean floor, rich deposits of rare earth metals can be found. These minerals are highly prized by industry and are used in electronics to build anything from computers to mobile phones.

Deep-sea vents are rich in minerals but they are also home to unique groups of creatures that have evolved to live in extreme conditions. We are discovering that the genetic material from creatures living in the deep ocean have valuable scientific and commercial properties which can be used in new medicines, cosmetics and even biofuels. Tomorrow's life-saving drugs could be waiting for us at the bottom of the sea.

Typically, the industry is trying to give the impression that deep-sea mining has a low environmental impact. However, we have no idea what the long-term impacts of deep-sea mining will be. A growing number of deep-sea scientists, environmentalists and coastal communities have been voicing increasing concern. Delicate corals, which have taken millennia to grow, could be decimated in one fell swoop by the cutting tools of underwater machines which are as heavy as 10 large trucks.

A recently released report by Greenpeace details this emerging threat to the ocean.

Deep-sea mining is just one emerging threat facing oceans which have already been pillaged and soured by decades of overfishing, climate change and pollution. The high seas, which cover half of the planet, is where governments and industry have been desperately trying to secure their right to exploit ocean resources, instead of fulfilling their obligations to protect them.

A body made up of 25 countries aiming to protect Antarctica -- the Commission for the Conservation of Antarctic Marine Living Resources (CCAMLR) -- completely failed to live up to its name last month in Germany.

Selfish economic interest gripped countries like Russia and the Ukraine as they defied a scientific and environmental imperative to protect the home of countless penguins, seals and whales. They cynically questioned the authority of this global body to establish marine protected areas, despite the fact that it has a clear mandate to do so in this region.

For years, countries have been discussing whether there is a need to negotiate a new UN agreement to protect high seas ocean life. Last year, governments set a deadline of 2014 for when they would stop their cynical political bickering and decide on this issue.

Right now, in New York, they meet again to discuss the need for a new agreement and the urgency of protecting high seas marine life. The majority of the world's governments, including Brazil, South Africa, France and other European States support a new agreement. It is up to them to counter the blocking actions of other countries and to drive forward an effective agreement for the benefit of the whole planet.

So please, don't hold your breath and hope for the best. Join us, and many others, in demanding high seas protection and healthy oceans now: Help us push a #waveofchange on Twitter at @Greenpeace and make your voice heard to protect high seas!