Halsey is one of a rare breed of pop singers that the masses haven't yet caught onto, but that can still be counted as a global superstar, at least in some respects. Her debut album Badlands started off last summer at number two on the Billboard 200, and since then it seems like she has been everywhere. She hasn't yet had a massive hit single, and she isn't really a radio mainstay, but if anybody seems like they are headed that way, it's Halsey. 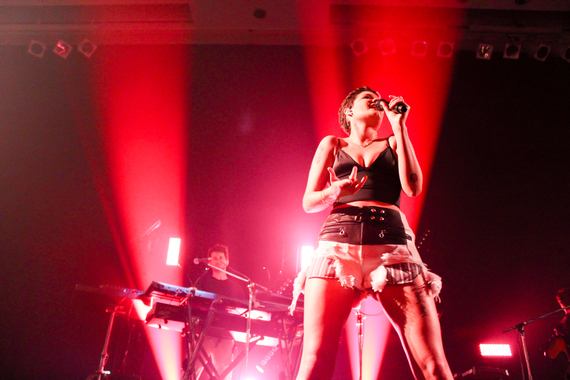 Halsey performing at the Hilton in Tokyo (credit: Hugh McIntyre)

Earlier this month, the buzzworthy artist took to the stage in Tokyo as part of Hilton's Concert Series, which is being offered to members of their HHonors program as a bonus. When I first heard that Halsey was being brought out to Japan for this event, I was wondering if she was the right choice. Was she really big enough to go all that way and play to what I thought was an audience that might not know her very well? It didn't take long for me to understand that I was very wrong, and that she was perfect for the job.

Opening act De De Mouse was the best man to hype the crowd, and he is now one of my favorite live DJs. While many EDM stars are up on the decks hitting play on big hits while you wonder if they're really doing anything or if this is a pre-made mix, De De Mouse was giving it his all. When he first came on, he had his work cut out for him, as the crowd did not seem interested in anything that wasn't the headliner, but he had so much energy and charisma, it spread almost instantly to everybody in the room. His beats were on point, they were in everyone's faces, and by the end of his time, I could have danced for hours more.

As Halsey was about to take to the stage, the audience's excitement was overflowing. It was incredible to see so many people that pumped to see an artist that was still by many rights bubbling under the consciousness of even the musically-inclined in her home country. The screams when she finally walked out were deafening, and it seemed like she had everybody hooked from the get-go. From there, she could do no wrong, and the set went off without a hitch.

Halsey had a show the next night also in Tokyo, but that was a ticketed, public concert, which has a very different feel to it than a private set in a hotel ballroom. This was a very special event for those in attendance, and it was clear they were aware of it. Before the music began, fans were treated to what felt like a real VIP experience, one where it appeared no expense was missed. Fancy hors d'oeuvres, free drinks, and a photographer pacing up and down looking for the best dressed and for the groups of friends that seemed to be having the best time all added to the overall ambiance and special feeling. 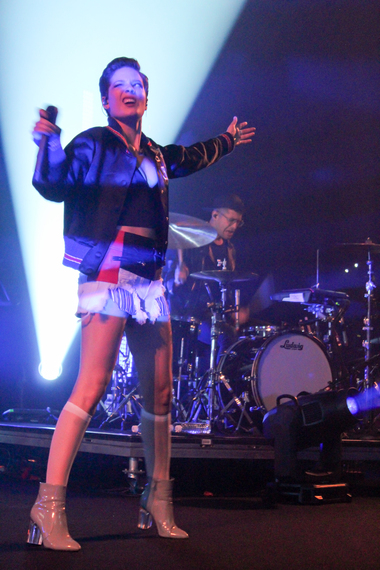 Halsey performing at the Hilton in Tokyo (credit: Hugh McIntyre)

This is the sort of members-only perk that brands often tout, but so many fall flat in the end. I can't speak for every show that is a part of this concert series, but I found this party to be a great night for all involved, and one that those lucky few hundreds of fans that made it in the doors would certainly remember.

This is the second year that Hilton has been hosting cool, up-and-coming artists at various locations, but Halsey's Tokyo show was the first time the company made it to Asia with the program. Hilton is ready to keep these concerts going once a month for most of 2016, traveling to some pretty cool places. Next up is Jr. Jr. in Toronto, followed by Grimes in Berlin. The final handful of shows are set to take place in the U.S., then it's almost time to start again in 2017.

Halsey's popularity in Japan is a testament to how the internet can make someone a global star these days. As I mentioned, she doesn't have a catalog of smashes like quite a few other female pop singers, but don't try and tell that to many of the kids at this concert. Her songs, such as "New Americana," "Colors," and "Castle," have all gone viral in some way and have racked up millions of plays on streaming services and YouTube. With numbers like she has, who needs the charts?