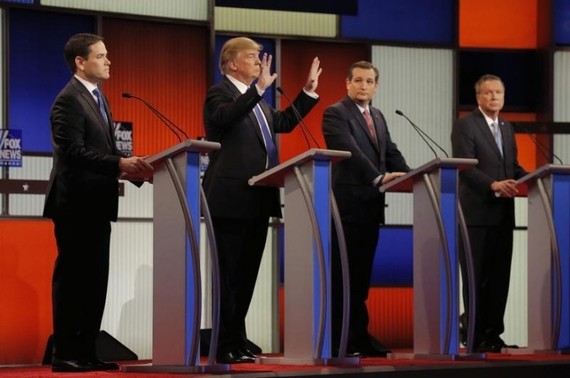 There were more male body parts discussed in the most recent #GOPDebate in Detroit, Michigan than one might have expected in a presidential debate forum. From the perspective of feminist body theology, this was enormously revealing of actual issues at stake in this presidential election.

Astonishingly, this was an actual exchange in the debate:

TRUMP: ...And he referred to my hands, if they are small, something else must be small. I guarantee you there is no problem. I guarantee.

So there you have it. Two GOP presidential candidates were trading insults about "big" and "small" in regard to their bodies.

Feminist body theology looks at how the human body has been religiously and culturally symbolized over history. It is no surprise to anyone that the male member, as Augustine of Hippo phrases it, symbolizes power and control. In feminist theology, there is a great deal of reflection on what is called "androcentrism," the use of the physical differences between men and women as a metaphor for power and dominance in the male, and the receptivity and passivity in the female as argued in Paula M. Cooey, The Religious Imagination and the Body: A Feminist Analysis (p. 22).

Does it surprise anyone, therefore, that when a strong female candidate for president is emerging on the Democratic side, this body symbolism becomes the charge and counter-charge against two male candidates?

But returning to Augustine, the male member also symbolizes 'unruliness,' i.e. the willfulness of the body in rebellion against the soul. Feminist liberation theologian Rosemary Ruether brings this up in her book Women and Redemption: A Theological History.

Augustine is interesting in this respect, as he is trying to actually think with the body, and in that regard the male member and its symbolism is not necessarily power and control, it is rebellion against God and the will of God for human life.

So, yes, one can say that the #GOPDebates are simply sinking into the muck, with name calling, frat guy type ridicule and insults, and this is just a low point in politics.

Actually, I think, theologically speaking, it was far more revealing than that.

The main issue in conservative thinking about leadership has always been how to signal strength. Strength over weakness is the way conservatives frame leadership both domestically and internationally. Negotiation is cast as "weak," and killing our enemies abroad or militarized policing at home is considered strength.

That is mirrored in Joseph Nye's separating "soft power" from "hard power," the "power of attraction" which is "soft," according to Nye, versus "coercion" or even the use of force as "hard power." This is clearly symbolic language of the same genre as the Republican debate on the size of body parts. When she was Secretary of State, Hillary Clinton commonly used "smart power" to get out of this unfortunate dichotomy which she defined as "the full range of tools at our disposal--diplomatic, economic, military, political, legal, and cultural--picking the right tool, or combination of tools for each situation." I have certainly critiqued this language in my book Dreaming of Eden: American Religion and Politics in a Wired World as far too instrumentalist, but it is far better than the hard/soft dichotomy in traditional conservative rhetoric.

Unruly members, per Augustine, actually pretty well sums up what is wrong with both "hard power" as a way to signal strength, and to actually highlight what is profoundly wrong with physical dominance, up to and including illegal physical force, as the only way to conceive of strength.

We have to go no further than candidate Trump at this #GOPDebate advocating committing war crimes as a way to deter terrorism:

BAIER: Mr. Trump, just yesterday, almost 100 foreign policy experts signed on to an open letter refusing to support you, saying your embracing expansive use of torture is inexcusable..[and] the military will refuse because they've been trained to turn down and refuse illegal orders.

So what would you do, as commander-in-chief, if the U.S. military refused to carry out those orders?

TRUMP: They won't refuse. They're not going to refuse me. Believe me.

BAIER: But they're illegal.

And Mr. Trump had no problem with that either, claiming terrorists "wives" on 9/11 knew what they would do.

Torture is the ultimate body theology offense; it turns the human being being tortured into a thing, no longer a human being with a will, but a physical center of pain. For that reason it is a morally out of bounds, i.e. a war crime and it is always wrong.

On issues of whether torture or bombing or police brutality equals strength, the signals about the body being sent at this #GOPDebate were clear. Physical dominance is the only meaning of strength and it eclipses any moral consideration.

So guess what? On this, at least, feminist body theology and Augustine agree. This is a symbolism of the unruly member as rebellion against God and God's will for humankind. Power as overwhelming physical dominance is not power at all, it is the ultimate weakness.

Theologically speaking, this most recent #GOPDebate was very revealing.