The congressional vice-grip is tightening on Blackwater and other contracted defense firms.

Next Wednesday, Rep. Jan Schakowsky (D-IL) will introduce legislation to phase out the use of tens of thousands of private security contractors deployed on battlefields where American troops are present. The Stop Outsourcing Security Act intends to effectively put Blackwater and their ilk out of business. 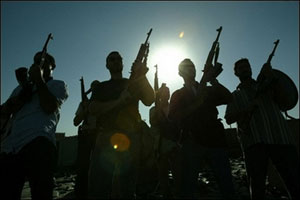 "After 9/11 we thought airport security was so important that it shouldn't be contracted out and we created the Transportation Security Administration," said Peter Karafotas, a spokesman for the Congresswoman. "The writing's on the wall that Blackwater needs to go, and contracting is on its way out."

Private contractors should not be used "for functions that should be reserved for U.S. military forces," Schakowsky argued in a "dear colleague" letter to fellow House members earlier this month. Half a dozen fellow members of Congress, including Reps. Bob Fillner (D-CA), Jim McGovern (D-WA), and Nick Rahall (D-WV), have since signed on as co-sponsors, and Sen. Bernie Sanders (I-VT) may introduce a companion measure in the Senate.

Schakowsky acknowledges that the security contractors could not be given their walking papers immediately, since "our armed forces have been so overtaxed" and now rely on their assistance.

But she has moved up the date for a complete phase-out of contractors to June 1, 2009, from her original proposal of 2012, after consultation with military experts, her staff said. The bill would apply to all places where Congress has authorized the use of force.

One expert on private security companies says that while the question of contracting has been treated in a partisan manner, there were reasons why reigning in such firms could be supported by both sides.

"This is something that the base of both sides can agree on," said Brookings Institution scholar Peter Singer, who wrote the book Corporate Warriors: The Rise of the Privatized Military Industry. "Many conservatives don't like idea that contractors are hurting the troops, and they don't like the idea that contractors are being paid more than the troops."

The State Department, which employs more than 1,000 guards from the companies Blackwater, DynCorp, and Triple Canopy, would not comment directly on Schakowsky's proposed legislation. But a spokeswoman did refer the Huffington Post to a report prepared for Secretary of State Condoleezza Rice on the use of private contractors for security in Iraq.

The report's authors argued that the contractors were a necessity because of the small size of the State Department's Diplomatic Security Service.

"Given the limited size of the Diplomatic Security Service...by having this combination of federal agents and contractors, we feel that's the right balance," Ambassador Patrick Kennedy argued in a press conference last week rolling out the report.

Kennedy also suggested that the military was not best equipped to protect US interests in Iraq.

"The U.S. military is a force projection entity. It is not -- its specialty is not personal protection," he added.

But Schakowsky's staff disagreed with the idea that contractors continued to be needed for missions like the one in Iraq.

"The situation now is that we have the uniformed military already having to look over their shoulders everyday so they don't get shot by insurgents, and now they have to babysit contractors," Karafotas argued. "Instead of having the military watch over the contractors, we may as well have the military or the government do these functions."

Karafotas also disagreed with the idea that the government running its own protection services for diplomats and other personnel was too expensive.

The Brookings Institution's Singer also agreed that it was time for the State Department to stop claiming that its hiring of contractors was in response to an "extraordinary" need.

"When do you acknowledge that the State Department is too small, and that whether you're engaged in Iraq and Afghanistan, when it comes to security for officials, the threats have grown exponentially?" he asked. "It was a valid excuse in 2001, but that excuse does not work when these things become ordinary."

Note: An earlier version of this story erroneously stated that Peter Singer's assessment was that the bill could receive conservative support. The story has been corrected to more accurately reflect the meaning of his remarks.