A friend recently confessed that when he first met his fiancée, he suspected she was a bot.

At the time, figuring out whether the chats on the dating site came from a fembot or female meant the difference between dismissing spam and pursuing romance. But we’re nearing the point where our dearest partners could just as easily be a line of code as a human being. One day, we might even prefer the bots.

Spike Jonze’s new film, "Her," presents one vision of how these man-machine love affairs might unfold. Set in the not-so-distant future, the love story is eerily plausible. Theodore, a depressed divorcé, falls in love with “the first artificially intelligent operating system,” Samantha, and, like most human couples, the two have sex, bicker, vacation and even double-date.

To some, this digital romance might seem as plausible as talking animals or zombies. Look closer, however, and you’ll see that these cyber-soulmates are not only coming, but, in some respects, are already here.

“My husband is going to be mad,” a woman told Intel researchers last year. “But my smartphone is just as important to me as he is."

Our devices are becoming more sensitive to our feelings, more in tune with our desires, more in sync with our activities, more gifted at expressing themselves and more adept at understanding our language. We may be approaching an era when we use our computers not to access one another, but for the companionship of the software itself. It’s a love affair with "no one." And where that leaves the humans -- who are more selfish than software -- may be anyone’s guess.

“There already are people who display the behavior of the character in ‘Her’ with machines far less capable than the operating system shown in that movie,” said John Sullins, a professor at Sonoma State University who studies the philosophical implications of artificial intelligence. “What we would need is an operating system that would have the ability to both recognize human emotions and display appropriate reactions ... When that happens, everyone’s going to be in love with their machines.”

In his book Love and Sex with Robots, artificial intelligence expert David Levy predicts robots and humans will be falling in love by 2050. (He likens naysayers to the skeptics who believed the world was flat.)

But even now, though our gadgets have little more charm than a graphing calculator, we eagerly ascribe the hunks of plastic their own personalities. The elderly are forming bonds with robotic companions, like the Paro seal, and we talk about smartphones as though they can love, fight, flirt and make up their own minds. A survey earlier this year found that 57 percent of cell phone owners felt a “personal connection” to their virtual assistants, and more than half had named their artificial helpers. We’ve already accepted bots as entertaining conversation partners: Twitter accounts penned by algorithms, like @Tofu_product, @RealHumanPraise and @ProfJocular have attracted thousands of (presumably human) followers who delight at the humor and glimmers of insight produced by a piece of software's sensibility.

Talking about technology as though “it” were a “he” or “she” with feelings is a precursor to seeing machines as having their own agency and motivations. That’s in turn the first step toward people falling in love with their gadgets and believing the software can love them back, experts say.

“We have this device that has become a companion, and when we talk to people, they describe it in that way,” said Steve Brown, a futurist at Intel who focuses on evolving trends in technology. “As these devices become more personal and they get to know us, that bond and relationship we feel with our devices will only start to strengthen.” 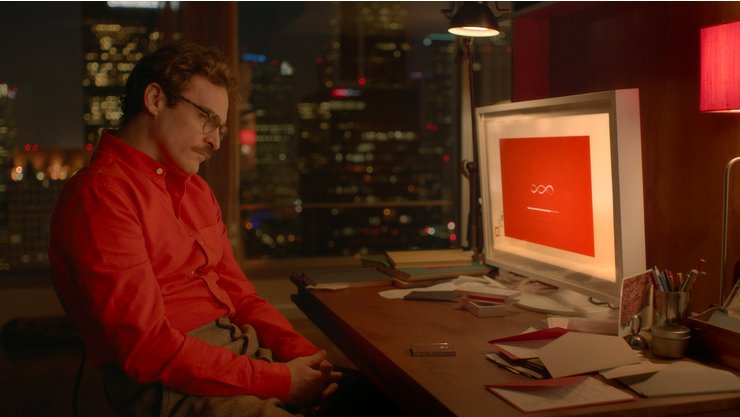 Theodore in the new film "Her" falls in love with Samantha, a computer-generated "consciousness."

Nonsense, many counter, pointing to how ignorant and ineloquent our gadgets remain. And to a large extent, they’re right. Software systems still have trouble understanding what we say -- much less the emotional tone of our voices or body language -- so phrases like “Let me spend my life with you” are more likely to trigger confusion than affection. While algorithms are good at predicting what we might like from Amazon, they’re still awful at guessing our mood, or dispensing thoughtful life advice. A human friend can sense you’re depressed and try to cheer you up. Your phone, on the other hand, will just keep pushing irritating Facebook alerts.

Yet as you read this, engineers are tackling the very challenges that stand in the way of creating human-like machines. Companies are determined to make computers interact with us as naturally as we do with each other. With this goal in mind, they're pioneering programs that can understand our language, decode our gestures, talk to us, recognize our emotions and, with impressive accuracy, guess what we’d like to do next.

“My team is working very hard on the idea of a richer conversation with Google,” Google engineering director Scott Huffman told the Independent this month. “Google will answer you the same way a person would answer.”

Google’s Moto X already lets people converse with their smartphone just by speaking to it from across the room. Nuance, which powers Siri’s speech recognition abilities, imagines creating different personas for its virtual assistants, a vision Siri’s original creators shared. (Similarly, in “Her,” Samantha is just one “consciousness” of many.) Companies like Affectiva have created emotion-recognition systems that enable algorithms to gauge our moods, then adjust what they show us accordingly. One day Facebook could try to cheer you up when you’re down, or Siri could sense you’re worried and whisper kind words to calm you down. Cars are already trying to step in for stressed and sleepy drivers. (Ford calls this "the car that cares.")

Having computers act more like people will make them easier to use, say engineers. At the same time, training them to merge seamlessly with our lives could also make them more appealing friends.

“As technologies become more competent and as they speak like us ... we will see people responding much more socially and much more powerfully to technologies,” said the late Clifford Nass, a Stanford University professor who died last month, in an interview earlier this year. “We’ll feel a much more emotional attachment to technology.”

Even without this progress, it turns out our own software makes us inclined to accept machines as companions. We’re programmed, for example, to think that others love us, even when all evidence points to the contrary. A study by psychologists at Harvard and Princeton Universities concluded that people believed they were loved when told “I love you” -- even if that declaration had followed desperate pleading like, “Just tell me that you love me.” At the University of Calgary, computer scientists found people were quick to ascribe intentions to a mechanical wooden stick. Some thought the pole was threatening them or angry; others that it was dancing or thinking deeply.

“[U]sers' ability (or is it need?) to be deeply engaged with abstract robotic motion is, we believe, powerful,” the researchers concluded.

The potential for a powerful bond, even with something as rudimentary as a stick, raises an uncomfortable question: What if the robots make better lovers than humans?

In "Her," chatting with people is far more awkward than speaking with software. The women Theodore dates are needy, complicated and downright weird. One reaches climax during phone sex only after she makes Theodore pretend he’s choking her with a dead cat. Another interrupts a passionate kiss to offer meticulous feedback on how he’s using his tongue. But Samantha needs only ask a few questions and to read through Theodore’s hard drive to instantly acquire the perfect personality to meet his needs.

“You just know me so well already,” he marvels during his first conversation with Samantha.

In some respects, the operating systems may actually have an advantage. Given how much data we generate -- through sensors, social networks and searches -- the day could come when a bot will know your desires better than a lover.

Already, Google Now could discover my interest in Japanese cookbooks or Ken Burns documentaries before my fiancé. Unlike Google’s virtual assistant, he doesn’t have the benefit of instantly collecting my searches, or analyzing every message in my inbox. Our own Samanthas could endear themselves by anticipating -- and catering to -- our every whim. They could have our favorite meal waiting for us when we got home, with mood music to match and jokes to tell, while our roommates or husbands are off tending to their own affairs.

We’re also less accommodating than our digital counterparts, who can be discarded with a click. Siri will never complain that you didn’t call -- and if she does, you can download a different assistant.

For the early adopters who have begun bonding with machines, the appeal, in part, is that “it’s hard to get people to do exactly what you want,” observed Sullins. Our extended interactions online may be acclimating us to relationships that progress entirely on our terms. Anthony Weiner’s Internet tryst with Sydney Leathers allowed him to impose his fantasy on her, without any turn-offs like sloppy kissing, bad breath or emotional demands. At the very least, we're getting comfortable with deep relationships based on screens.

Computer scientist Alan Turing pioneered a test by which a computer could be judged truly intelligent: if a person couldn’t tell she was speaking with a machine, then the machine had passed. In this day and age, another standard -- this one for gauging artificial affection -- may be necessary. This new Turing test will check not whether we can tell that our companion is a computer, but whether we care.