An artist friend told me a tale that inspired him to make wire art. While and 8-year veteran in the Navy, trying to figure out what to do after being a diesel mechanic, he was studying art deep inside a ship to South America and heard a story (told by Maya Angelou, the poet laureate) about the great mobile artist Alexander Calder and a show he was about to have in France. As my artist friend recalled it, Calder arrived at the airport, was picked up by the director of the gallery/museum, and the man casually asked, "So, the work has not arrived. Where is it? The show is two weeks away." Calder smiled and pulled out a spool of wire and said, "It's right here."

On it's own geographically personal but highly significant level, the Porch Gallery in Ojai has presented a show that offers just the same kind of belief.

(Full disclosure: As Director of ViCA I have worked with the Porch Gallery on several quite successful exhibitions.)

That story, whether true or not, has stayed with me, and I was reminded of it when I walked up the steps of the Porch the other day. Another artist friend and I were up in that beautiful neck of the woods to de-install her sculpture, and we were immediately struck by the openness of the show. The artist painted the majority of the work on the gallery floor a few days before the exhibition -- on gorgeous handmade paper he'd brought with him from Japan. One very long scroll was painted during the opening.

The artist is Souun Takeda, who's quite famous in Japan for his calligraphy, taught to him by his mother from an early age. He's never shown in the U.S. until now.

On the face of it, one might have reservations about a calligraphy show as art, the same way one might feel about "word art" in the contemporary sphere of the art world. For an artist, seeming too quick or spontaneous to an audience is a risk. Yet, in all modes of picture making, there are spectacular examples of art work that is worth it. For art that is made in the moment, the honesty of the work must be clear. This is a case in point. 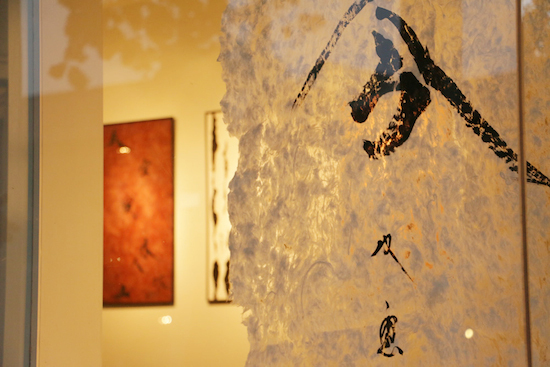 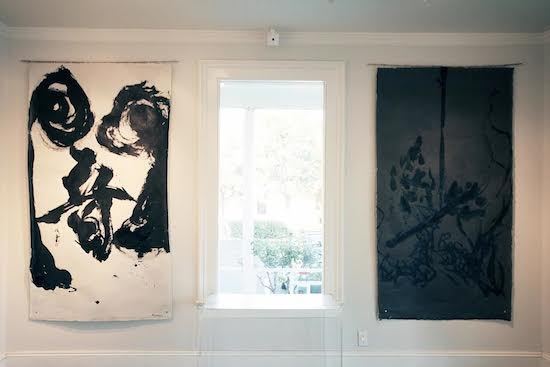 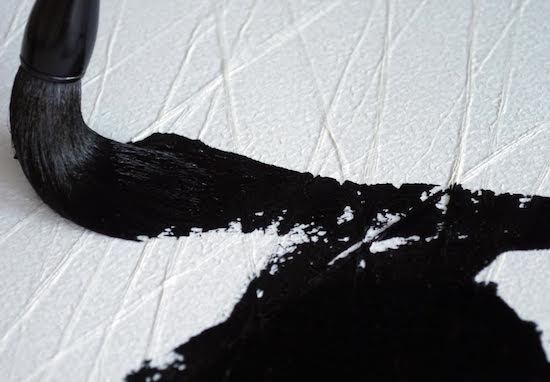 These works are loose, expansive, large impressions of the picture characters of Japanese writing, executed in an emotional moment, in a way that evokes Robert Motherwell, Sam Francis, and traditional Sumi-e ink painting (borrowed from China about 2000 years ago). They have exquisite confidence, a flourish that is a result of years of practice, the kind that creates an amazing riff happen on a guitar by Jimi Hendrix, an improvised solo on a harmonica by Toots Thielemans or a piano solo by Thelonious Monk. 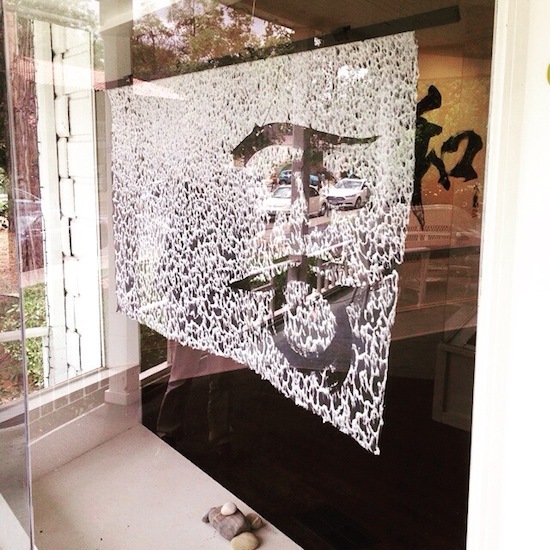 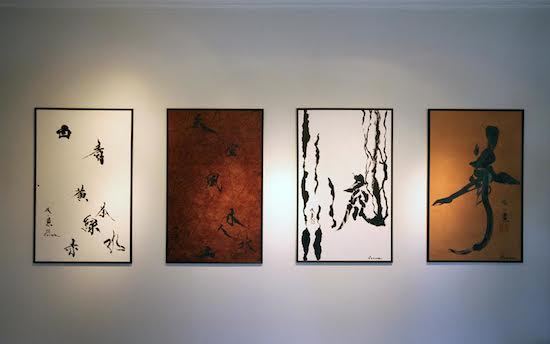 I asked the gallery owners, Lisa Casoni and Heather Stobo, about how working with Takeda has affected them.

"Heather and I see either work in progress or completed pieces and curate the show from that physical starting point. That was not the case with Souun. We entered the process through his emotional state. It was very important for him to be in Ojai to create this body of work based around the feelings of balance, appreciation, and joy that he experiences in the valley. As a result, he painted every piece in the gallery the week before the show opened. Without the finished works to discuss, we curated his feelings. The show literally starts with "Love" and ends with "Hope." Lisa Casoni 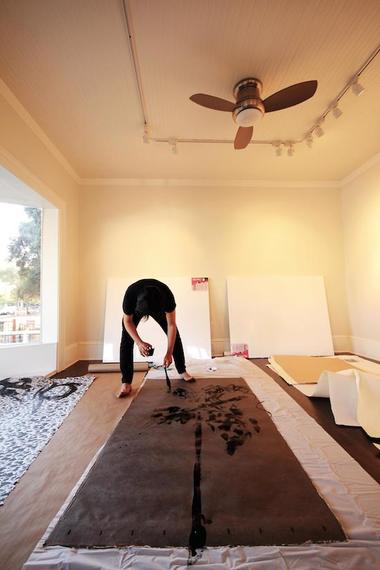 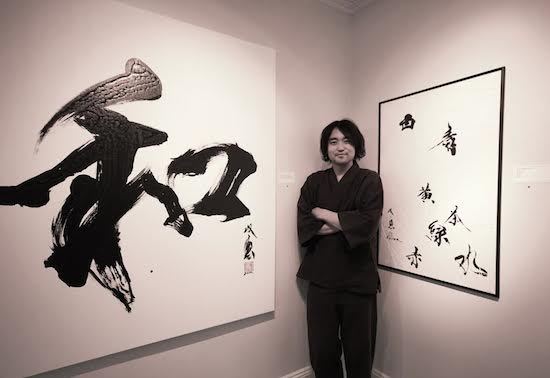 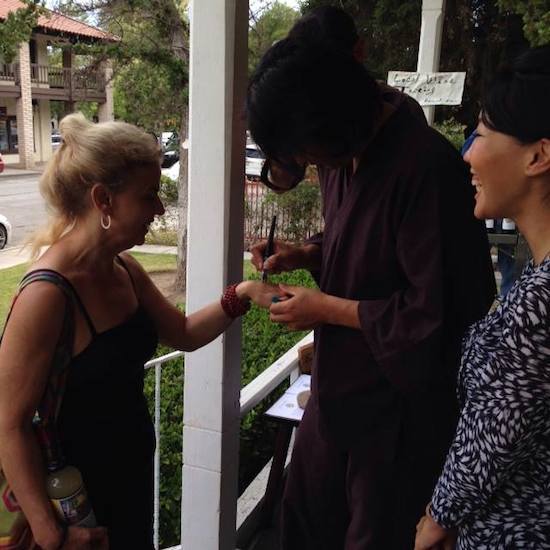 The paintings have a story to tell, about an artist expressing his gratitude for the inspiration that he found in Ojai, a place that reminds him of home, and his empathy for the people experiencing the drought in California. On the day of the opening, he told Lisa and Heather that he had been praying for rain, and was going to continue to. (As the show previous to this one, Water Works II, explained, it's been a terrible time.)

So in the moment, he decided to do a painting in situ. After the performance, it began to rain. 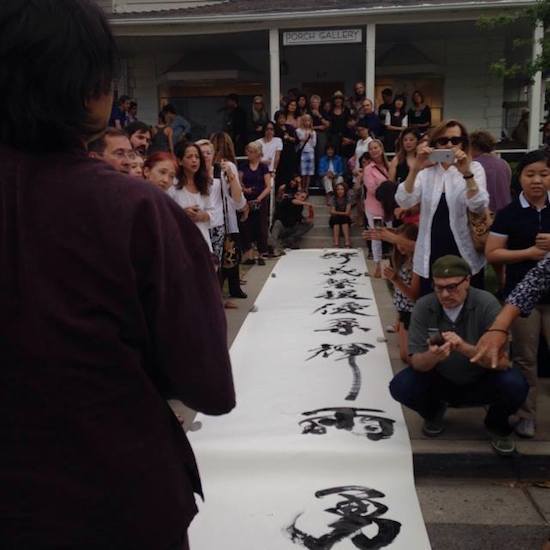 "The performance piece beginning from the front steps of the gallery out into the street was amazing. Since Souun's arrival, he had been asking for the clouds to open and bring rain to all of us experiencing the drought. He explained to all of the people who attended the opening, his appreciation for the opportunity to have his exhibition in Ojai and create work here. His name in Japanese means 'twin clouds'. He asked people from the audience to give him a word that mattered to them and he proceeded to paint on the scroll the words they called out starting on one side of the paper and then going back up to the top and continuing down the other side. At the end of the performance, drops of rain starting coming down. Screams of joy could be heard. Eight of us proceeded to pick up the paper and carry it to a secured place." -- Lisa Casoni and Heather Stobo 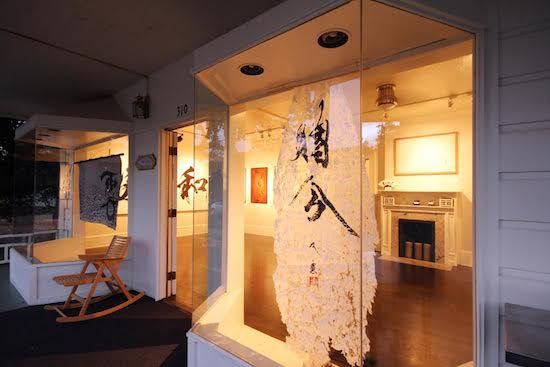 All photographs via The Porch Gallery Ojai.