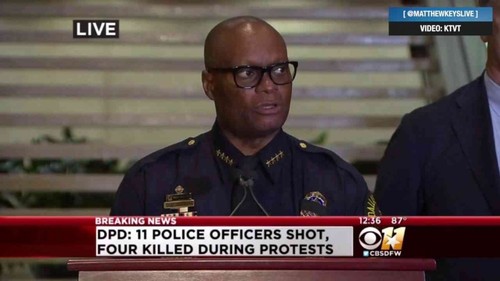 It's been a rough month in America. From Orlando to Dallas, from Louisiana to Minnesota, the bloodshed has been startling.

Rather than wondering if it will happen again, we've gotten used to simply asking: where next?

Meanwhile, some eloquent things are being written about how to come together and move beyond this all. Calls for unity have been made by President Obama and by many others, like this person on social media who said: "I think the key is that it has got to be all of us uniting together to make the change. That is where the power is."

While these sentiments are certainly needed, some of us have to wonder, What agreements or changes are we supposed to be uniting around?

Although good answers to that question exist (involving basic aspirations like safety, tolerance and respect or stopping the violence), it's also true that beyond these rudimentary basics, Americans are very much not on the same page about how to make sense of what is going wrong in our country and what to do about it.

Those disagreements alone, of course, are not necessarily a problem! In fact, profound differences can become an engine for fueling a productive, powerful conversation that multiplies insight and appreciation - while pointing a way forward.

We at Living Room Conversations know that by our own experience - with many experiences bringing together people for intimate, productive (and even fun) engagement across these same fundamental differences.

And we'll be the first to acknowledge that this kind of exchange does not reconcile many disagreements - nor necessarily unite us in common agreement. But that's not even the point!

With disagreements intact, something else changes. We go away from the conversation distrusting each other less - and liking each other more. And almost always, it leaves us with deeper understanding of why Those People (that we just met in person) have come to the conclusions they have.

Even in the presence of vociferous disagreement, THAT small sense of insight and appreciation about where each other stands can change so very much. Where animosity rules, affection starts to creep in...all on a foundation of new understanding we've galvanized together.

And THAT is precisely the understanding that seems to be increasingly an endangered species in America. As cited in Jonathan Rauch's recent article, "How American politics went insane," one research team recently found that "between 25 and 40 percent of Americans (depending on how one measures)...do not acknowledge that meaningful policy disagreement even exists" (emphasis our own).

Translation: Large numbers of Americans have concluded that Those People on the other side of issues they care about are simply corrupt, traitors, evil, malevolent, [fill in the blankety-blank].

Alternative translation: Large numbers of Americans hardly understand any more what their political opposite (really) thinks or believes anymore

For these Americans, that place where nuance and curiosity has been known to live in the brain has been colonized by something else more seductive (and entertaining): "Obama is clearly trying to start a race war!" "Those conservatives only care about money, power and controlling everyone else" "Those black lives matter protesters hate all police officers!" and so on.

Bottom line: In THAT kind of a conversation, within THAT sort of American atmosphere, how in heaven (or earth) are we supposed to "unite" or come together" as Americans? And even more pointedly, how are we supposed to STOP the bloodshed?

Not until something about the space between us changes fundamentally. Like a marriage in crisis, as long as the relationship itself remains charged and toxic, it's hard to see a possibility of any sort of forward movement...

Like that marriage in crisis, anything being said by One Side in America is now regularly, predictably being taken as further cause for resentment by the Other Side. In this chronic Fight & Defend mode, genuine understanding of where each of us stands doesn't have a chance, let alone "unity" of any sort.

Until the conversation in our nation heals, we believe nothing else will. Until we restore our ability to talk productively across differences, nothing is going to change.

It may even get worse.

We believe that profound answers may be found in the Space Between Us - far more than in some new complex policy shift or perfect new program-to-change-everything.

LET'S DO THIS, AMERICA. It's just too important to ignore...