We've documented success stories from farming communities around the world 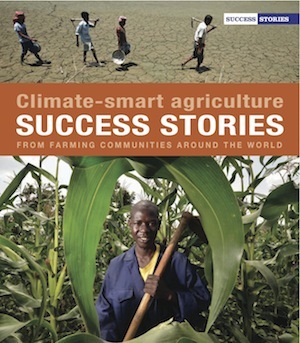 The world's climate is changing fast, and will continue to do so for the foreseeable future, no matter what measures we now take to reduce humankind's impact on it. And as temperatures rise, rainfall patterns and amounts change, and pests and diseases find new ranges, the face of world agriculture will have to change too.

Humankind is facing enormous challenges in feeding everyone on the planet. The Food and Agriculture Organization of the United Nations (FAO) estimates that 842 million people went hungry in 2011-13; that's one in eight people worldwide. And the human population is still growing. By 2050 there will be another 2.4 billion mouths to feed. We will have to increase the amount of food we produce by 70 percent to meet the extra demands placed by population growth and changes in diets.

Agriculture is responsible for about a quarter of human-induced emissions of greenhouse gases worldwide. Rice paddies and livestock are major sources of methane, a greenhouse gas more than 20 times as potent as carbon dioxide. Excessive use of nitrogen fertilizers not only pollutes rivers and lakes, leading to vast "dead zones" such as in the Gulf of Mexico and Chesapeake Bay, but also results in release of nitrous oxide, 310 times as potent as carbon dioxide as a greenhouse gas. Agriculture produces nearly half of all methane generated by human activity, and nearly 60 percent of nitrous oxide emissions. Clearing forests to open up new land for agriculture releases enormous amounts of carbon dioxide.

This is where "climate-smart agriculture" comes in.

The Food and Agriculture Organization of the United Nations (FAO) defines climate-smart agriculture as consisting of three main pillars:

But what exactly is "climate-smart agriculture"? Broadly speaking, it consists of proven practical techniques, such as mulching, intercropping, conservation agriculture, crop rotation, integrated crop-livestock management, agro-forestry, improved grazing, and improved water management, together with innovative practices, such as better weather forecasting, drought- and flood-tolerant crops, and crop and livestock insurance.

The booklet showcases 16 examples of successful climate-smart agriculture from both developed and developing countries. These initiatives are having a widespread impact on food security, adaptation to climate change and climate change mitigation, and are being implemented over vast areas and improving the lives of millions of people. 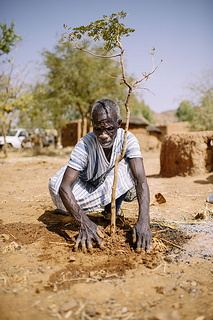 Firewood is an increasingly scarce and valuable commodity in the Sahel. Farmers who allow trees to regenerate on their land have a ready source of fuel for their own use and for sale, and are able to leave crop residues in the field, building up organic matter in the fragile soil. Photo: CIFOR

In the Sahel region of West Africa, for example, over 5 million hectares of degraded land have been restored through a practice known as 'farmer-managed natural regeneration' -- essentially farmers allowing trees to regrow from tree stumps on their land rather than hacking down trees year after year. After years of failed efforts to reforest parts of the Sahel using "traditional" tree planting approaches, this bottom-up approach has seen more than 200 million trees re-established or planted, with a huge range of benefits. Crop yields have increased, wind erosion has been reduced, farmers have more firewood and so use crop residues and animal dung as fertilizers instead of burning them. The trees sequester carbon, helping mitigate climate change, and improvements in the environment are making agriculture in the region more resilient to climate change. About 2.5 million people are more food secure as a result, and more are benefiting every day.

At the other end of the scale, farmers in Australia are benefiting from a Carbon Farming Initiative that allows them to earn "carbon credits" by implementing practices that sequester carbon or reduce greenhouse gas emissions. The farmers sell the credits to individuals and businesses that want or need to offset the greenhouse gas emissions of their business operations, creating additional income for the farmers and land managers and boosting resilience of Australian agriculture to climate change. Benefits to the farms can be impressive. A pig farm in New South Wales that invested in a biogas digester went from paying US$15,000 a month for electricity to earning US$5,000 a month from the surplus electricity generated. The farm is burning some 2400 cubic meters of methane every day, saving the equivalent of 32 tonnes of carbon dioxide. At US$13.80 per metric ton, the carbon credits the biogas digester is generating are expected to be worth around US$160,000 a year.

The 16 initiatives show the potential of agriculture to adapt to a changing climate, to be more resilient and protect farmers against future changes in weather patterns, pests and diseases, and to slow the rate of climate change. The challenge now is to promote widespread adoption of climate-smart agricultural interventions around the world.

In the next two weeks, world leaders will descend upon Warsaw Poland for the latest round of UN climate change talks. After four years of fruitless discussions on agriculture, we need global policies that recognize the critical role of agriculture for climate change adaptation and mitigation. The examples showcased in this book show that some countries are very far ahead in their planning -- this should serve as inspiration for new policies and initiatives. A more detailed analysis of the success stories, published a few months ago, reveals insights into how widespread adoption might be achieved, drawing lessons from the 16 initiatives presented.

Climate-smart agriculture - Success stories from farming communities around the world is published by the CGIAR Research Program on Climate Change, Agriculture and Food Security (CCAFS) and the Technical Centre for Agricultural and Rural Cooperation (CTA). For live updates from the UN Climate talks in Warsaw follow @cgiarclimate and @bcampbell_CGIAR.