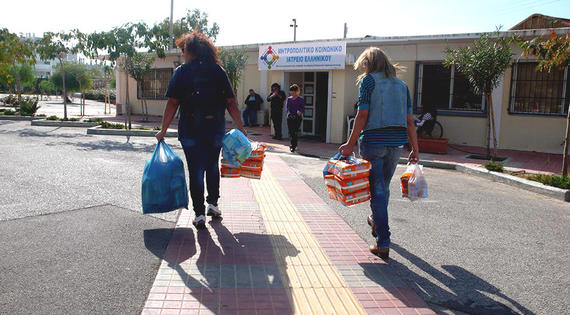 Photo: by the Metropolitan Community Clinic at Helliniko

"We don't earn anything, we only spend, but for each other," said a tall, middle-aged man as he entered the little room full of medicine where I was sitting behind a small wooden table, interviewing a 15-year-old volunteer at a solidarity clinic in Pireus, Athens. As he raised his voice, he added: "Write that down, say that we are no NGO that pays people for doing something good. We all do this for free; we do it because we have to." He closed the door and left.

Not only do the hundreds of volunteers involved in Greece's informal health structure consisting of circa 50 solidarity clinics & pharmacies earn nothing, they also do not get the praise they deserve. Like in May of this year when the Medical Association of Athens, instead of supporting the cause, decided to accuse solidarity health clinics of causing unfair competition due to the "unknown work relationship" between the clinics and their volunteer doctors. This was not only a slap in the face for those giving their time and effort to provide indispensable health services for free at these clinics, but also for at least 75,000 Greeks that relied on these services alone in Athens. As a response, the Social Solidarity Clinic & Pharmacy of Arta published a statement saying they pity those who think that solidarity clinics are illegal and that all it does "is have love and respect for the fellow man, nourishing hope for a better future, for a life with dignity."

Over this summer I was lucky to visit dozens of examples of such healthcare-related solidarity. I learned that not only do they provide the sick with medicine and health services, they also help reverse the alienation suffered by many due to unemployment by strengthening social values and practicing open communication and selfless giving.

Greece has lately been seeing its own version of the "economía solidaria"; a term dating back to Latin America in the 80s when a big segment of the population started experiencing economic exclusion due to debt and unemployment and decided to counter it through a cooperative, autonomous and self-managed provision of various services by their members. The same thirst for justice and self-management could be witnessed in the past five years in Greece. Here, austerity has forced self-organization in areas such as housing, food and healthcare. It is especially the latter that has resulted in a remarkable network, quietly saving lives every day whilst listening to announcements of more and more public services being compromised.

'An alternative was needed' Just two years ago, various authors and journalists referred to Greece's newly-sprung clinics as underground clinics; places people started going to as they increasingly could not afford or access treatment at a private or public hospital. Patients with severe physical and mental problems, many with cancer, diabetes or depression had to neglect their physical and mental problems for months as they were not able to pay the steep private hospital fees.

The public system became inaccessible because of inhumane waiting lists as a result of being greatly underfunded on every level due to austerity. Now in 2015, as Greece's socioeconomic crisis has long become a humanitarian crisis as expressed by Prime Minister Tsipras and other Syriza officials on multiple occasions, these underground clinics have long become known as "social" or "solidarity clinics" and their existence is not even closely as secret as the former term would suggest. Even though they are considered informal and exist without any legal status, solidarity clinics have become the alternative and frankly, quite innovative form of organizing healthcare for the citizens of Greece -- by their own neighbors and friends.

Greater Athens alone accounts for approximately 20 of these clinics and pharmacies. Another 30 are spread all over Greece, including on its islands where public health cuts have resulted in particularly neglected patients. Clinics operate free, without the use of money at any point. The doctors, nurses and administrative assistants are volunteers, buildings are either donated by the local municipality or squatted, leftover medicine is mostly donated by locals and medical equipment tends to come from retired physicians.

What has started off as an emergency solution to the harmful effects of public health cuts has almost become a parallel health structure on which growing parts of the Greek population start to rely. It is a structure that places the idea of health being a human right at its very center. In times when healthcare has become more and more commodified, competitive and selfish, self-organized relationships of care and community demonstrate a way out. They prove that healthcare can work if it is organized and creatively crafted by those most affected. 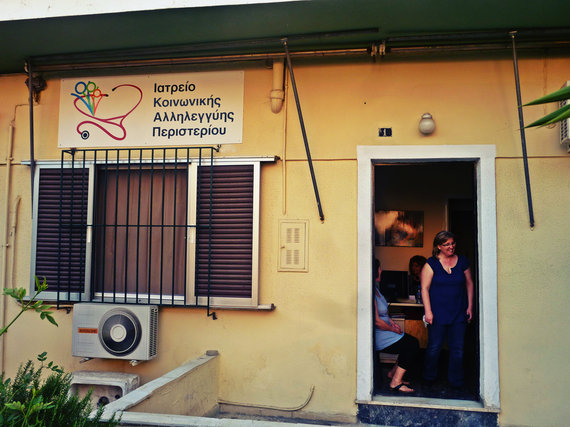 Health care from the bottom-up, in the middle of crisis-stricken Greece and born out of dire need: How did all of this happen and how did a people decide to take health into their own hands?

The first solidarity clinic -the Social Clinic of Rethymno- was to open on Crete, the idyllic island that is especially popular amongst European tourists. The clinic describes its purpose on its website as supporting people who do not have access to free health, medicines and vaccines as well as highlighting the problem that a big part of the population is being excluded from basic health services. Whereas the clinic was initially founded to serve the influx of immigrants and refugees, it soon started getting demand from native Greeks. Those who came were from diverse backgrounds; most just recently lost their health insurance as a result of unemployment. More than 300,000 people fell into this bracket in 2014, making the total share of uninsured Greeks stand at around 33.2% of the population (not even counting immigrants). Even people that are part of the social security register and formally employed have increasingly been making use of the solidarity structure; a decrease in public spending for medicines by more than half, from ca. five to only two Billion Euro means that many are unable to afford co-payments for drugs of sometimes up to 70%.

Whereas Greece has surely never been a pioneer in health matters - it has always been able to guarantee access to care to those that needed it. Its healthcare has been a mix of social health insurance and tax financed services via its own NHS run structure; comprised of a fragmented, corrupted but nevertheless accessible system. And although quality suffered in the last years, the biggest difference now is not that good-quality services are unavailable, but that people´s incomes are too low to pay for them any longer.