Developed nations, and most especially the United States, have long been frustrated at their poor ability to do what diplomats and politicos carefully call winning hearts and minds.

From the Cold War to what Pope Francis lately calls a piecemeal World War III, the effort to wage peace and democracy has come in predictable waves of recognition: America has a PR problem. Only a few political cycles ago, for example, Karen Hughes, now global vice chairman of PR giant Burson-Marsteller, was tapped by president George W. Bush to lead the charm offensive. With the recent rash of bombings in Beirut, Paris, Mali and elsewhere, there are sure to be renewed calls to win the love of yankee detractors or at least co-opt the extremists, particularly ISIS. 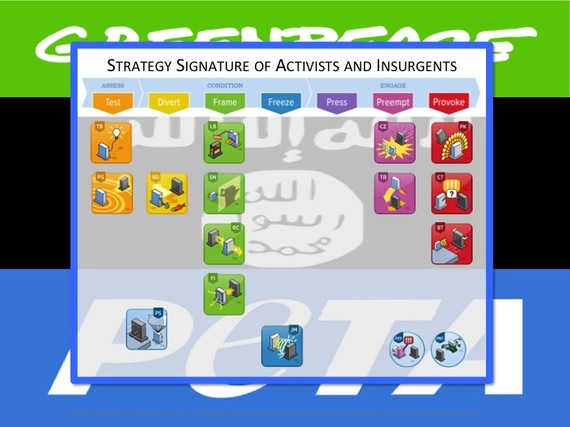 Unlike past dabblings in public affairs propaganda (yes, this all falls along the spectrum of public manipulation), new designs will enjoy an easing of the draconian Smith-Mundt Act, which required good manners in bad-mannered theaters, and greater empowerment of the Broadcasting Board of Governors, which oversees sprawling outlets like Voice of America. But jihadists will still have the upper hand. Just as terrorism is asymmetric so too are the influence strategies that terrorists employ. In the same way that activists hunt and haunt corporations with all manner of publicity stunts, illegal invasions, FOIA attacks and made-for-media misreads, the plays that jihadists can and do run are comparatively unrestricted. As illustrated through the frame of The Standard Table of Influence, consider the composite signatures of the activist-insurgent (above) and the cautious or unskilled playmaker (below). That they are near mirror opposites is not a coincidence. One aims to prosecute a position and advance an agenda. The other is geared to mitigate negatives and promote positives.

Puzzled by the enemy that can't be intimidated (i.e., the activist-insurgent), Kathleen Parker of The Washington Post pens this paradox about the war on terror:

We say: If you don't stop murdering innocent people, we're going to bomb you into oblivious.

They say: Bring it on. No, wait, we'll do it ourselves. Boom.

What the columnist describes is bad practice by Americans. The threat to bomb an enemy is an influence play called the fiat, a strategy of declaration or demand. But to foes with less to lose, threats are taken as dares and, as Parker observes, dares are willingly taken. ISIS calls such bluffs with strategies both unfamiliar to and unanticipated by their western opponents. Suicide bombers, by example, use the bullrush strategy made famous in Hunt for Red October, the crazy ivan. Boom.

Just as Exxon jousts with Greenpeace and SeaWorld with PETA, first world democracies must wise up and loosen up in the face of smaller but savvier social warriors. Strategies heretofore shunned by diplomats and information officers, like the Red Herring, Bait, Call Out, Trump and aforementioned Crazy Ivan, are notably counter-intuitive and highly effective.

Each, however, requires a certain acceptance that sacrifice must be made for ultimate gain and, often, that ethics must flex to context. In other words, each requires a liberated interpretation of established morals, reputation and risk management. Red herrings (aka ruses, decoys, smoke screens) are thrown, per se, at the expense of a player's credibility but provide the benefit of a needed distraction. Baits are issued at the risk of antagonizing a target but draw a rival from a protected position. Call outs are a similar gamble but have the advantage of shifting an opponent onto the defense. The trump, named for the card game, not the billionnaire, requires the steely eye because its principal purpose is to steal ideas without blinking.

Will Barack Obama or his successor have the will to run these plays on ISIS? Perhaps, but they require two things first: Permission of a nervous citizenry to play on the broader spectrum of influence. And practice. When story-telling and happy talk is all you know, prosecution doesn't come naturally.

Whomever the extremists may be, one thing's for sure: They play by different rules and fewer restrictions. Learning those plays and their essential, counter-intuitive nature is key to keeping the peace.