In Pixar's movie, Inside Out, the character Disgust looks like this: 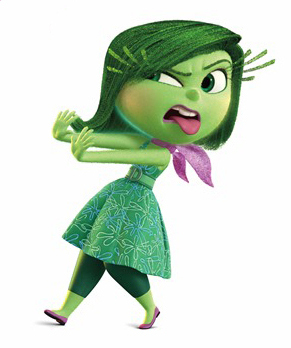 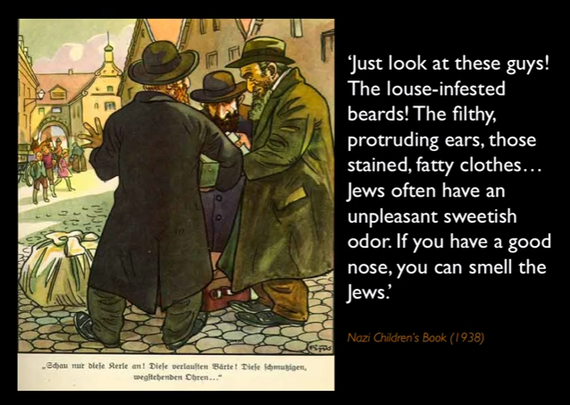 This second example references not the Holocaust, but a few years before it. This was a time when entire groups of people - Jewish people, gay people, and mentally and physically disabled people, among others - were the targets of propaganda campaigns working to transform ordinary human beings into something disgusting in the public eye.

It's now about 75 years later, and the word "disgusting" is getting thrown around in presidential politics, referring to groups like women, Mexicans, and Muslims. Should we be alarmed? Yes, we should.

In this post, I'm going to give a quick rundown of how disgust works as a political strategy, and why it's so powerful. Then I'll get into how we can counter it.

Biologically, disgust is a reaction to substances that might harm us by making us sick, like poop, blood, rotting flesh, and spoiled food. It's different from fear, which is a reaction to imminent bodily harm (like seeing a shark fin approach). 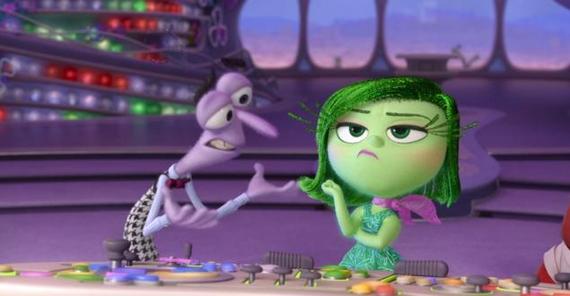 Fear and Disgust in Pixar's Inside Out

If you're a politician speaking at a podium, it's actually pretty hard to make the people listening physically feel fear. Low-grade dread is the best you can hope for. Disgust, on the other hand, is simple. Feeling grossed out is visceral and automatic, and it's easy to get there with words alone. Think about it - have you ever asked a friend to stop telling all the gory details of their recent surgery, or how their dog got sick, because it just made you feel too gross?

Not only is disgust an easy emotion to evoke, it's also special because it's highly contagious. If you touch a disgusting object (like a fly swatter) to a clean object (a sandwich), the clean object becomes contaminated. This easily translates to politics: if you rhetorically tag Hillary Clinton with a toilet, BOOM, she's disgusting.

This actually happened recently. During a debate, Hillary Clinton was a few minutes late returning from a bathroom break. Here's what Donald Trump said about it:

The reality is that all the candidates regularly use the bathroom, including him. But that fact doesn't diminish at all the emotional power of the image he invoked with his words. He specifically wants you to think of a toilet when you think of Hillary Clinton.

Shortly after this incident, Donald Trump tagged Clinton with disgust again, using a different angle. In his "Hillary and her friends" Instagram video, he shows images of her alongside Bill Clinton, Bill Cosby and Anthony Weiner. This time, instead of a toilet, he's tagging her with "the blue dress", serial rape, and dick pics.

The contamination feature of disgust is just as easy to apply to social groups or moral issues as it is to individuals. It has a subliminal, distancing effect, and it's scary how easily it can go unnoticed. As Soraya Chemaly writes, "Disgust is step one of othering people, step one of justifying injustice." The myth that "Jews smell bad" might actually have seemed like a silly thing at first - but it was a step on the path to dehumanization. It should come as no surprise that the groups most likely to be tagged with disgust are lowest in the social hierarchy, and disgust is often used to prevent them from "infecting the integrity" of a better-positioned social group.

I want to say a few more words about Donald Trump, since he's the person who's been making the news the most lately for invoking disgust. The first time Trump really got in trouble for it was when Megyn Kelly called him out at the August 2015 Republican presidential debate, saying "You've called women you don't like, 'fat pigs,' 'dogs,' slobs, and disgusting animals" to which he responded "Only Rosie O'Donnell" and then later described the exchange by invoking period blood: "You could see there was blood coming out of her eyes, blood coming out of her wherever." He's "contaminating" women by associating them with animals and blood.

Donald Trump has also called Mexicans and Muslims disgusting, as well as handshakes and elevator buttons and windmills. Here's a nice list of 32 things he's called disgusting. His excessive use of the word is becoming a joke at this point.

The thing is, if you think elevator buttons are disgusting, that's fine - you can't dehumanize an object. But if you're running for the highest political office in the country and you think entire groups of people are disgusting, that's scary. It's particularly scary if you are representing a party with conservative political beliefs, because studies have shown that conservatives are significantly more sensitive to disgust than liberals. One study was even able to predict political leaning based on disgust sensitivity with 95% accuracy. If you want to learn more about the science behind this, there have been a couple of great breakdowns in the Washington Post and the New Republic.

In a nutshell, Trump's strategy of tagging people and groups with things like toilets and pigs and blood is extra powerful politically, because he knows his audience. He's exploiting his party's elevated sensitivity to disgust.

The antidote to disgust as a political strategy

Now that we know how disgust works, what do we do about it? Because disgust has a distancing effect, the solution is to eliminate that distance. We need to find ways to bring people closer to the "disgusting" person or group and invite them to develop empathy.

The only way past disgust is through it. Here is a step-by-step approach:

When disgust appears in politics, the first step is to identify which person or group is being pushed away. What -isms or -phobias do we see? Might be racism, islamophobia, misogyny, xenophobia, homophobia. We can ask ourselves, why is that person or group being othered? What is the political reason they are being distanced? We can also look at our internal assumptions: Do we personally feel distanced from that person or group? Why?

Step 2. Zero in on the ignorance involved

Ignorance is an absolute requirement for political disgust to exist. For example, the GOP has cultivated ignorance around women's lives and bodies, maintaining that there will always be a "mystery," about the "opposite sex." They do the same thing around Mexicans and Muslims, painting them as the un-relatable, un-understandable "other" who needs to be held back by walls and laws. When you see disgust being evoked against a group of people, you'll rarely see a personal story - the narrative is all vague generalizations. Our tendency as humans is to love and care about other humans. If we start to understand and identify with a member of a group, that'll erode ignorance. But first we have to recognizing that ignorance is being purposefully cultivated.

Disgust and empathy are processed in the same part of the brain (the anterior insula) and both focus on protecting the self from discomfort. Disgust protects from discomfort via getting sick or "contaminated", by causing us to draw away from the source of discomfort. Empathy does the opposite. It forces us to get close to another person or group and feel their pain. The worse we feel as a result of our empathy, the more motivated we are to help the person or group feel better, because it will make us feel better. It's a little bit selfish, really, but it works. And the result is that the feeling of discomfort is no longer just far away, it's actually gone.

But it doesn't just happen automatically. How do we make that switch from feeling disgust to feeling empathy?

Here is where we bring in those powerful individual stories that are suppressed in order to cultivate ignorance. It's time to let them out, because they are the secret to closing the distance. Where can you find them? Look to your social networks, or start googling. The stories are there if you're motivated to find them.

A few great examples I've seen recently involve people trying to counter period disgust, such as this art project by Rupi Kaur and this video for the guy who hates period commercials. Both are heavy on exposure: they aim to bring a traditionally "othered" taboo into a balanced reality.

Another great example is the stereotype-breaking "I'm Muslim, But I'm Not" video (definitely watch it if you haven't already: the messaging transforms amazingly into "I'm Muslim, And"). In this video, a group that is usually otherized by American mainstream media as a homogenously scary, incomprehensible group, is able to deliver its own personal messages to communicate varied, relatable self-identities.

Lastly, back to that Hillary Clinton bathroom thing. Soraya Chemaly's piece on the subject gets into what bathroom inequality actually looks like in reality. The otherizing message on women's bathroom use is that women take forever because they waste time on a combination of frivolous (gossiping, primping) and unmentionable (periods) activities. Chemaly's piece exposes inequalities in bathroom construction, the differing realities of women's bodies and clothes, and disproportionate childcare responsibilities. There's nothing mysterious about it.

Creating a blog post or a video or an art project takes a lot of time and energy. But sharing one with your network does not - you can easily boost the signal this way. Hashtags are another powerful method of personalization, because they allow us to easily participate as well as access a huge, connected volume of personal stories very quickly - like #MuslimApologies and #periodsarenotaninsult. These might seem like small things, but they're so important. You never know who's listening.

Transforming disgust is not a one-time thing. It requires repeated, positive exposure. In our social-media saturated environment, this is extremely doable. But it will involve a lot of people pushing back in personal ways and sharing their experiences to counter the disgust narrative. When it comes to women's bodies, it will also be important for the platforms themselves to stop "protecting" men from non-sexualized realities of periods, breast milk, and body hair.

Why can't we just flip the script and talk about how Trump is actually the disgusting one?

The last thing I want to mention is how some groups have started to try to use the word "disgust" against Donald Trump. 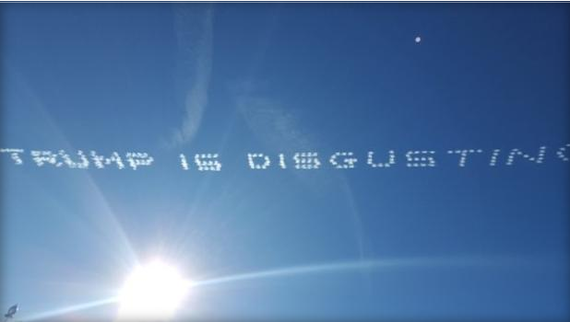 Or the recent Slate article calling Trump's anti-Muslim plan "disgusting but not surprising."

My initial reaction to turning the term "disgusting" against Donald Trump is that it's a weak strategy because it maintains the feeling of disgust front-and-center, which doesn't really get us anywhere. Dan Kelly, an assistant professor of philosophy at Purdue University, takes a more philosophical point of view, saying "It's not ethically appropriate to deliberately depict any group of people as disgusting because disgust makes it very easy to dehumanize, and that would do the very thing we seek to undo."