So far in this series, I've been helping you find out exactly what you want to say (see previous post links below*). I've argued that getting that right makes everything else easier, faster and probably better.

Now I'll turn from what to say to how. The first thing to know: give your writing a shape.

One of the most common weaknesses of amateur writing is its lack of a shape. Sometimes it just meanders, from this thing, to that thing, and oh, by the way, to this other thing, as if the writer got lost in the woods picking mushrooms. Or it may amount to no more than a list of facts, with filler in between, like bullet points, but worse.

This doesn't have to happen; shapes prevent it.

Let's start with one of the simplest but most useful shapes: the Inverted Pyramid. You may already know of it as the classic format of news stories. You may even think you already know how to use it -- but in my experience, few people really do. 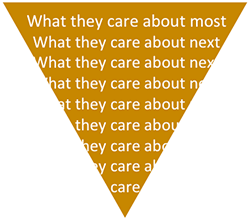 This shape works well for news, for a couple of reasons: readers in a hurry can scan a story and drop it at any point, without missing the most important material, while editors in a hurry can cut the story almost anywhere and it'll still make sense.

As simple as it is to understand, though, the Inverted Pyramid requires practice to master. That's because you need to get out of your own head, and into your readers' hearts. You must learn to focus on what they care about, not you.

Getting this backwards is such a common mistake that editors have a name for it. It's called "burying the lead" (or "lede", as its sometimes spelled, to avoid confusion with the heavy metal). The lead is what comes first, and in an Inverted Pyramid story, what comes first should be what readers care about most. It will usually be based on your angle (which we've discussed previously).

Here's an example of burying the lead:

The City of Anyville will host a town hall meeting at the Anyville Community Center on Friday, Nov. 12 from 7 to 8:30 p.m.

The topic of the meeting will be the planned construction of a new stadium on the east side.

The facility will be the new home of the Anyville Hornets, as well as a venue for a variety of other sports and entertainment events. Its construction is expected to cost the City many millions of dollars in tax breaks, infrastructure spending and ongoing services. Supporters say it will significantly boost the downtown economy and generate thousands of new jobs.

The above is typical of much of the writing we all run across (and maybe produce ourselves): correctly written, but deadly dull.

That's because the lead is buried. Readers don't care who's organizing the meeting, as important as that may seem to the organizers. Nor do they care where or when the meeting is happening, before they have any interest in going.

What readers care about is buried in the third paragraph: the costs and benefits of the new stadium. That's because those stand to make readers' lives either worse or better. Readers also probably care about whether the meeting itself will be interesting or entertaining.

So here's how a news editor might dig up the lead and rewrite the opening paragraph:

It will cost taxpayers uncounted millions -- but it might create your next job. That's the potential of the planned Anyville Hornets stadium, and it'll be the topic of hot debate at an upcoming town hall meeting.

That's a pretty big difference -- the difference between boring and not. And all we had to do was get the pyramid pointing the right way: upside down.

* Here are the previous posts in this series: