Last time, I showed you how to give your writing some shape by using the Inverted Pyramid format. As I said, this shape works well for news, because the reader finds more important material closer to the top. This has a downside, though: the farther you go into the piece, the less interesting it's likely to be. So it doesn't work too well when you want to build interest, such as in a story or a blog post.

To meet that challenge we can use another kind of shape, this one derived from ancient principles of drama. 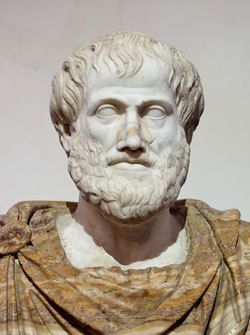 In his Poetics, Aristotle defined the three-act structure of a well-written play: "A whole is what has a beginning and middle and end."

At first blush, that seems crashingly obvious: of course there's a beginning, a middle and an end! But the power of this model lies in the function of each of its three parts:

1. The beginning is a situation of relative stability, which contains the potential of what's to come.
2. The middle features tension or conflict.
3. The end is a new state of stability: a resolution that integrates the beginning with discoveries made in the middle.

The three-act structure is still in widespread use, including in nearly every Hollywood movie.* It apparently resonates at a deep level of our minds, which show a strong bias in favor of threes. Think of the syllogism, basic to logic: if A and B, then C. Or rhythm: almost all of our natural and musical rhythms are built on groupings of either two or three.

We can apply the three-act structure to the "Anytown Stadium" example we used last time. For example, at the top of the story we might set up this situation:

For 10 years now, the block of 1st Street between Adams and Coolidge has been a wasteland of boarded-up shops, broken asphalt, and weeds.

In the middle, we could introduce and explore conflict:

But when Anytown Hornets owner John Johnson looked at that block, he didn't see a wasteland -- he saw a palace of sports and entertainment.

There might follow struggles between Johnson and whoever or whatever stood in his way, such as interest groups or zoning laws. Then, at the end, a resolution:

Some passersby -- those who have lived here for a while -- may feel there's something familiar about the architect's rendering of the controversial new stadium's 1st Street façade. Those irregular arches flanking the main entrance? They follow the rooflines of old 1st Street. It's the picture, Johnson swears, of a newly thriving downtown.

This format probably feels familiar, from any number of magazine-style feature stories, which explore meaning and texture as opposed to hard news.

It can also be used for opinion pieces: the beginning introduces an argument, the middle engages with conflicting arguments, and the end resolves with a deeper understanding of the original argument.

Bear in mind that "three acts" doesn't imply a timeline of one thing after another. Skilled writers will feel free to range across time and space, touching on matters large and small. For a masterful example, relevant to our previous discussions, see John McPhee's recent New Yorker essay "Omission: Choosing What to Leave Out".

Even there, though, once you reach that intricate piece's delightful end, you'll find that McPhee got you got there via a beginning and a middle.