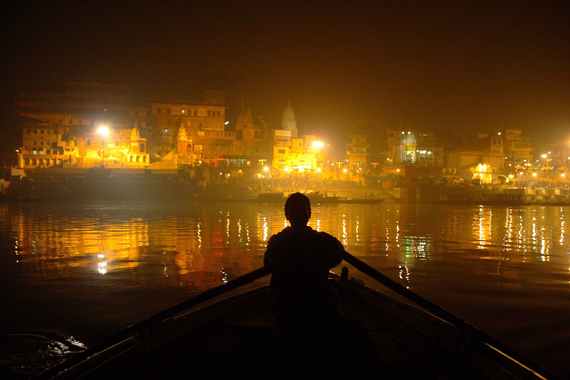 India has always been synonymous, to me, with magic and mystery.

I must confess that growing up in the West, it was Rudyard Kipling who first ignited my passion and The Jungle Book and Kim are still go-to reads for me...and before you jump on me -- yes, I know that his colonial roots are problematic, but as you knee-jerk me, I highly recommend that you do some exploring on the subject -- fascinating, seems many Indian academics give him high marks for his love of the country and keen eye and ear, but I digress.

Magic, mystery, a country that has more diversity and enchantment in a crowded market than many countries have in many square miles.

And yet, India is more often in the world news for ethnic violence based on intolerance, rape and molestation of women, impenetrable bureaucracies and a seemingly general malaise toward it all.

As I discussed this dichotomy with friends in Mumbai last week, one of them laughingly said: "You have the same problems in the United States...we just make ourselves an easy target for the West." And we do, and they are.

But this is not a diatribe on social issues, rather a look at why the magic and mystery are powerful drivers that are propelling India -- not holding her back. In fact, I'd argue, the West needs to take a way deeper look than merely citing the latest BRIC slowdown.

Perhaps Deepak Chopra framed it best when he said:

We're living in a time when the world has suddenly discovered India because it's run out of raw material for its imagination. The raw materials for imagination are inexhaustible here.

I truly believe that we have allowed our digibabble orientation to cloud our minds. We are convinced that we own imagination because of our fixation on the latest and greatest digital toys that will change our lives, today, because we can download the newest addictive game app that some analyst predicts will alter the way we consume and buy, because we have access to data -- Big Data -- that allows companies to know everything about us...hmm.

Yet, I would argue, our focus is on what seems new and cool, and frankly our membership numbers are small -- we are jaded -- we assume everyone has the latest iPhone or the newest Samsung or the most incredible game-changing tablet ever, and in our relatively small circles most/all do.

We obsess over monetization more than utility, and more often than not monetization is all about advertising and each new app or social development brings about predictions of the demise of what came before and often does, in fact -- but worse is the pontification -- we swing from worshipping large social networks to praying over smaller ones, from revering user-generated content to slavering over productions of the highest quality and hugest budgets, from virtuality to life events -- all are good and true -- but in the world of quarterly earnings it seems we need heroes and zeros quickly.

But not in the ROW -- rest of the world -- there is a new way to look at growth potential, one that suggests we leave our measuring biases aside and get into the hearts and minds of others.

I found India humbling and Deepak Chopra to be true.

By June, according to reports, India will surpass the United States and be ranked as the number two country -- behind China -- in terms of size of Internet base -- and that base is growing six times as fast as the world's average.

Moreover, year on year smartphone growth is close to 60 percent, making India the second-largest smartphone growth company in the world -- but let me caution you before you jump to create Angry Elephants or whatever -- only six percent of phones in India are smartphones.

You see, 833 million people live in rural areas -- their needs are much more basic and much more primal -- and here is where true and inspiring imagination steps in.

Check out SMSGyan and its founder Deepak Ravindran, who turn dumbphones into smartphones by taking texted inquiries searching the Internet and returning the answer as a text message. 120 million users and 1.3 billion inquiries -- he calls it "Google for the developing world," and he is enabling rural businessmen, doing amazing social programming and is empowering Twitter, Facebook, you name it, all because he turned his imagination on, linked online and off, and solved for real human need. He has already expanded to seven countries, and watch for it to show up in the developed world as well.

How about CGnet Swara, a center for mobile/citizen-driven community news that helps advocate on behalf of the have-nots. Created by Shubhranshu Choudhary, a former BBC journalist and IT leader Arjun Venkatraman, formerly of Silicone Valley, together with Microsoft Research India, CGnet Swara helps citizens connect with officials reporting everything from breakdowns of government services to polluted rivers to gang rapes and violence in villages.

Or what about NextDrop -- a text messaging system that helps bring water more efficiently to customers. A simple service that links a chain of providers and users in areas where people get water only a few times a week and for a few hours at best. Rather than wait hours at communal taps, NextDrop helps the engineers know where the need is and the people know when to expect service. Brilliantly simple, and no gamification.

Bottom line -- I say in India (read China and Africa too), the next billion users who go mobile will do so not in our very limited image, but with dumphones or better -- basic smartphones (LOL) -- and imagination not limited by digibabble analysts.

I know it's hard for Silicon Valley to imagine that 70 percent of all handsets shipped are basic. Harder to imagine that data as they know it is irrelevant (not data in general, let's be clear: Read about the UNICEF RapidSMS initiative. I have seen it at work in the field) and maybe even harder to imagine how connectivity constraints, charging issues and basic human needs are fueling tremendous creativity and development that I believe will benefit the world as much as the next most important social app ever.

We are jaded. We are looking the wrong way. And we are being swayed by short-term data and thinking. We need more "raw material" for our imagination, and frankly there is more than enough out there to keep our best very busy for a long time to come.

But I do believe that it is wake-up time for the developed world, listen:

Let me flip it -- people in India and China are giving you opportunities you never dreamed about; just use your imagination.

One more point -- TV households are growing too, get it?