The Indiana firestorm over a bill designed to pass off discrimination as religious liberty may serve as an unintended stepping stone to equal protection under the law for all Americans -- including lesbian, gay, bisexual, transgender, and queer (LGBTQ) Americans -- but this will not happen if we let down our guard.

According to the National Conference of State Legislatures, "Religious Freedom Restoration Acts" (RFRA) laws are now in place in 19 states across the country, and 10 others have similar bills in the works. These laws met little resistance even though conservatives consistently used florists and photographers as examples of business people who should not be required to serve LGBTQ people based on religion.

No one wants to be against religious freedom, but people are waking up to the real agenda here -- and I just have to say, thank God! Leaders of Metropolitan Community Churches (MCC) know this is part of the game plan of conservative Christians to establish religion as THE constitutional right that preempts all other rights. MCC is clear -- the religion that conservatives want to establish is a conservative, anti-LGBTQ, and anti-woman brand of Christianity.

It was not until one legislator in Oklahoma took a stand that resistance emerged. Oklahoma's proposed RFRA looked like a slam dunk until state legislator Emily Virgin proposed an amendment which would require businesses to post a sign if they would not serve LGBTQ people. This would avoid embarrassment by all parties. In short order, the bill was shelved.

Thank you, Emily Virgin, for outing the real intent of RFRA!

When the resistance began to emerge in Indiana, it was dramatic. Officials from Disciples of Christ, the cities of San Francisco and Seattle, Angie's List, Salesforce, and Apple are just a few of those who were ready to take huge economic hits to stop the tidal wave of bills that could be used against LGBTQ people.

At last, the public knows that, unless RFRAs have a specific non-discrimination clause that protects LGBTQ people, it's not the Religious Freedom law; it is the LGBTQ Discrimination Law! Without specific protections, "Religious Freedom" becomes a smokescreen to force the government to submit to conservatives who feel it is a "burden" to their religious expression to serve LGBTQ people.

In MCC, we know that conservative Christians are not really concerned about everyone's freedom of religion. No Evangelicals stood by us when MCC members were blocked when they wanted to hold worship services in Michigan's Jackson State Prison. Where were the RFRA people when a federal court claimed our worship services would be a danger to prisoners?

The people who are really in danger from RFRAs across the country are women who can be denied reproductive services, children who will be denied adoption, and LGBTQ people who are evicted or suddenly lose jobs and have no recourse -- all in the name of religion.

We must not forget that the Bible was misused to silence women and to support slavery! God knows, sincerely held religious beliefs can be wrong! And in a democratic society, those beliefs should not be enshrined in law. 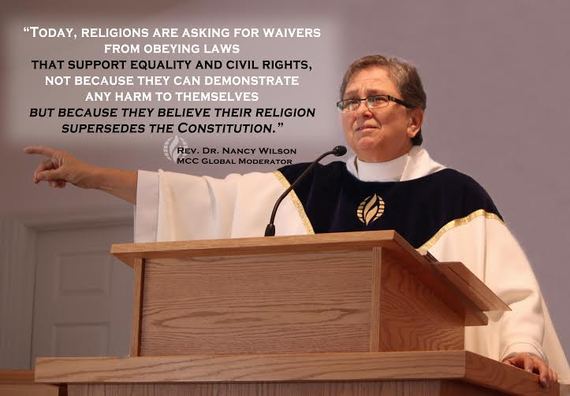 A March 2013 report entitled "Redefining Religious Liberty: The Covert Campaign Against Civil Rights" by Jay Michaelson for the Political Research Associates describes "a highly active, well-funded network of conservative Roman Catholic intellectuals and evangelicals" that "are waging a vigorous challenge to LGBTQ and reproductive rights... [in the name of] 'religious liberty.'"

The New York Times reminded readers this effort goes back at least to 2009 when conservative Catholic, Orthodox, and Evangelical leaders released the Manhattan Declaration, which said they would not cooperate with any laws that compelled them to recognize same-sex marriages or enable abortions.

Metropolitan Community Churches (MCC), where I serve as global moderator, was founded when no church in the United States would welcome LGBTQ Christians. The churches were wrong. Countless LGBTQ people and their families were devastated. Finally, churches began changing their ways. They realized they were harming people and are now working hard to welcome everyone.

Devotees of dogma are now trying to do harm through RFRAs. Can these RFRAs be fixed? Should they be nixed? Isn't the Constitution of the United States enough to protect everyone's religious freedom? Why do we need RFRAs? We don't!

It is time to turn the tables. Religion is not an excuse to ignore equality before the law. Our government should not have to explain why it protects the civil rights of citizens. If religious people want to discriminate, the burden of proof is on them to show how trampling the civil rights of others is core to their religious faith.

For the first time ever in Indiana's history, sexual orientation and gender identity are now part of the state legal code. Perhaps it will be an ironic twist of legislative history that an effort to discriminate against LGBTQ people becomes the first impetus to infuse LGBTQ non-discrimination into state legal codes.

Religious freedom is still a constitutional right, and we will defend that to the end. But religious freedom should do no harm. It should never be an excuse to discriminate.