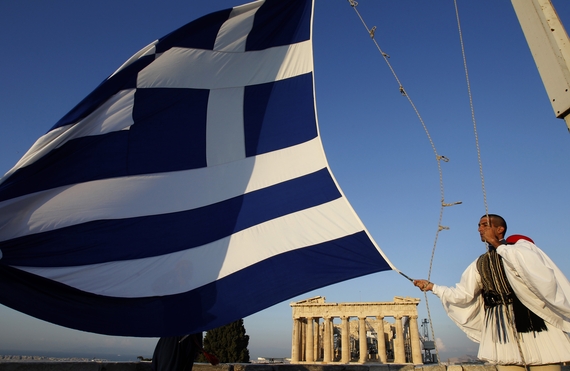 Once again the spotlight is shining on Greece. The world is watching with anticipation to see who will win the standoff in Europe, David or Goliath? I too, am waiting with bated breath. There is no doubt that the financial crisis and austerity measures are crippling Greece. Anyone can see it simply by walking around Athens. But, I believe there is still much promise within Greece. After all, the Greeks built the Acropolis, gave birth to modern medicine, created democracy, and philosophy. If anyone can find a way out of this crisis, isn't it the Greeks? With this thought (and hope) in mind, I set out to find some Greeks who were taking the financial crisis and using it as a way to innovate. What I discovered surprised me, and gave me hope.

While the Greek economy is in the doldrums, many new startups have emerged within Greece; as the people look for ways to take their future back into their own hands. In fact, the number of startups in Greece has grown nearly tenfold between 2010 and 2013, from a mere 16 to 144. Investments in startups have risen as well, from 500,000 euros to 42 million euros, over the same timeframe. All sorts of new companies are slowly beginning to flourish within Greece. I can tell you firsthand of several success stories that I've encountered during my time in Greece. 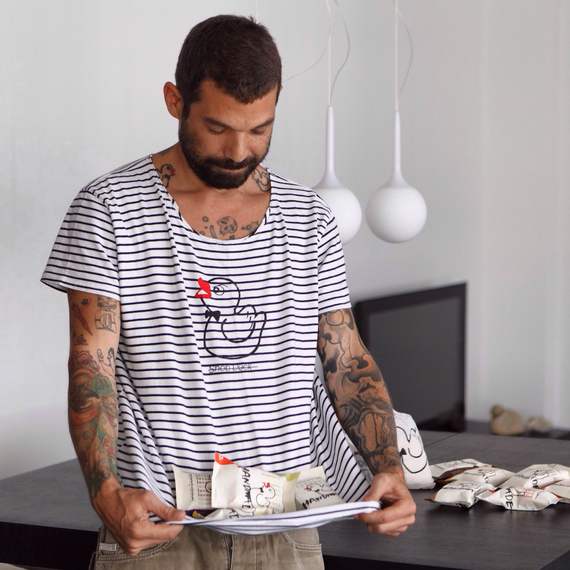 One success story is that of Vasilis Douros. He started a soap making business in Tripoli back in 2012, called Snob Duck. It started for Vasili as a project born out of curiosity. He knew that Greeks used to make their own soaps on a regular basis. The French may have built a name for themselves as soap makers, but the Greeks have been making soaps since 2800 B.C. France took on the art of soap making in around the 13th century. I'll let you do the math. But suffice it to say, once again the Greeks were way ahead of the curve!

Vasili's family has a small olive grove, which gave him access to the key ingredient he needed, olive oil. "It took 9 months of experimenting," Vasili recently told me. "I would experiment with different aromas I liked, and various recipes. In the beginning I sometimes had to throw the results away. But after a while I knew the soaps were good. I was ready to start selling." 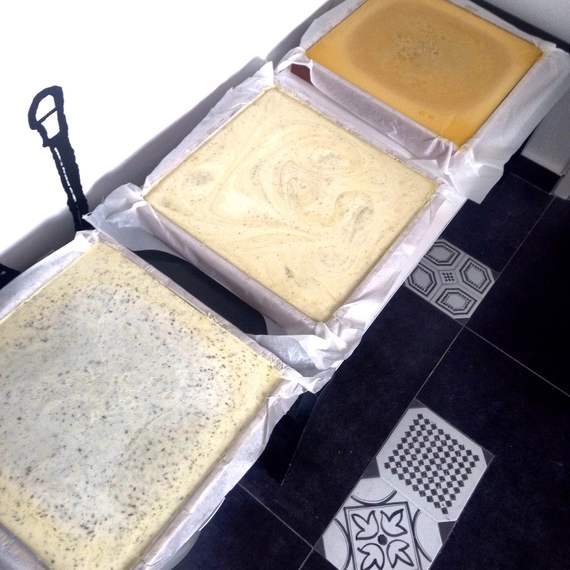 His story of soap making reminded me of my own trial and error recipe testing in the kitchen. People see the end results of a Sweet & Skinny recipe. They don't realize how many times I had to make that recipe, in order to get it just right!

Fast forward several years, Vasili is now making about 2,000 bars of soap per month. He sells his soaps throughout Greece, as well as in the US, including in San Francisco! This is how I first heard of "the duck." 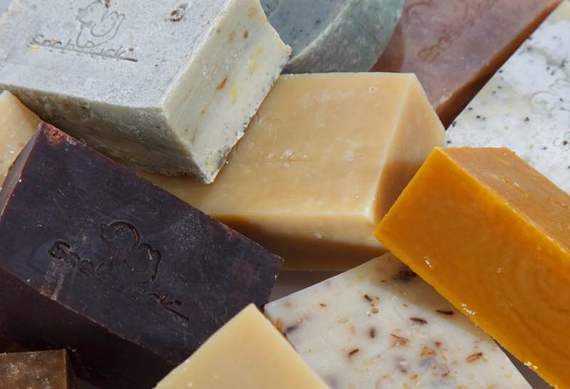 When I saw Vasili's soaps, with flavors like chocolate, Greek orange, and poppy seed (can I say flavors with soaps? I know they aren't edible, but his really should be!), I knew I had to meet this guy! I wanted to know his story. I wanted to focus on some of the positive things that are happening in Greece right now. When I asked Vasili how Greece's current situation had shaped his decision to start a soap company, he made it clear that for him, the financial crisis didn't make him feel like he had no other option. "I guess I'm more of a romantic," he said. "I started something that derived from my curiosity. I wasn't paying attention to what was missing from the markets. It's not about trying to find something fast and profitable. My heart spoke. I loved it. I was addicted." Although I adore his answer, I'd still like to think that he might not have had the time to explore his creative side if the economy had been different. Perhaps he would have been too busy, chained to a desk somewhere, working for a company?

There are numerous stories like Vasili's emerging from Greece. 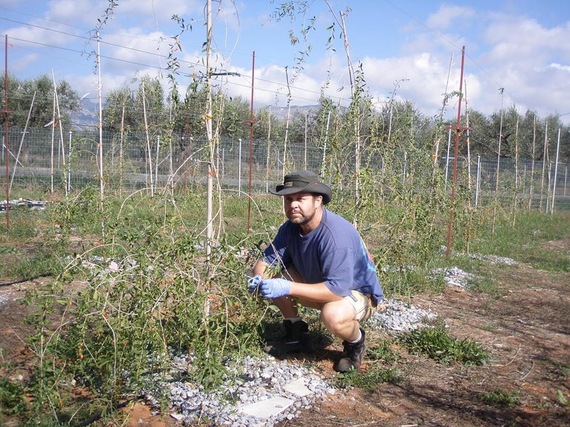 George Drepanos is another success story. He owns Greek Green Goji, an organic goji berry farm focusing on green farming practices. He left Athens a few years ago, after work began to slow down with audio-visual entertainment companies. He now lives in beautiful Lakonia, and started his own organic goji berry farm, GGGoji. His farm produces both fresh and dried goji berries. 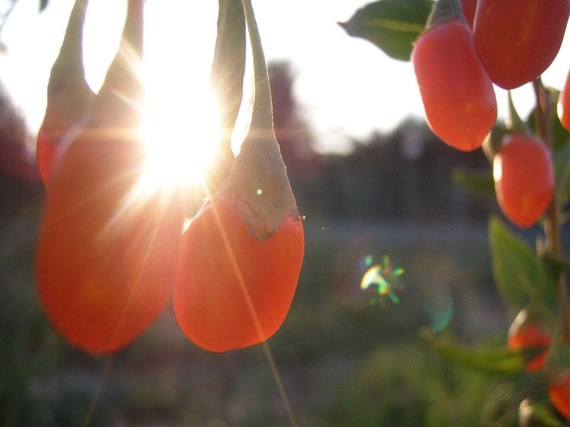 Between the Mediterranean sunshine, and careful means by which he grows and harvests the berries (handpicked, with gloved hands, to prevent damaging the berries) they are without a doubt the best goji berries I have ever tasted! Clearly I'm not the only one who thinks this, as GGGoji is now selling online throughout Greece, and to countries around the world. "We are definitely expanding," George happily told me.

So yes, Greece is going through a major crisis. But Greece still has so much potential! I have this theory about what Greece needs right now more than anything. Perhaps on the surface it will sound somewhat naïve. I am by no means an expert. I know that when politics is involved, the answers are seldom simple. But I think of the ancient Greeks, and the ability they must have had to work as a team. The Parthenon had three architects working together, a sculptor, hundreds of artisans, painters, and metal workers. It certainly wasn't built by a few people saying "let's just do this on our own!" On a smaller scale, it's the same in a professional kitchen. Without your line cooks, prep cooks, expediter, dish washers, and servers, all working together in harmony, your kitchen falls apart. When it does fall apart, we in the restaurant industry call it, being "in the weeds." And trust me, once you've been in the weeds, you don't ever want to go there again! There is simply greater power in numbers.

I was recently talking to a Greek who told me a fascinating fact. The word idiot comes from the Greek word ιδιώτης (idiotes). In ancient Greece the word idiot was used to describe an individual. This "idiot" was someone who was trying to do it all alone instead of working as a group. On a large scale this means Europe working together as a whole. But on a smaller scale this also means Greeks, and people of Greek descent, all working together too. I know this is a concept Greg Pappas is a firm believer in. Greg is the founder of The Greek American Foundation, and a great supporter of Greece. As Greg recently said, "Greeks supporting their fellow Greeks is music to my ears." So I wonder, what would happen to Greece (and Europe) if everyone worked together? I wonder what would happen if every Greek, and every person of Greek origin, banned together at this moment in history and did something to help the greater good? I see bits of it slowly happening. Without investors putting money into startups, these young and innovative Greeks wouldn't get the funding they need to follow their dreams. Without his parents' olive grove, Vasili might not have had the olive oil he needed to start his soap company. These are small examples when you compare them to the economic scale of finance in Greece. But like a drop falling into a pool of water, they have a ripple effect. They expand........and have the potential to reach farther than you ever imagined!