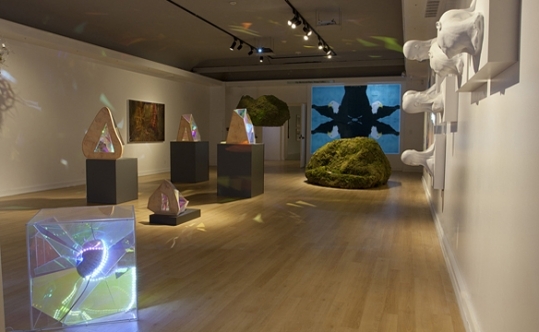 "Re:Mind," a multimedia installation at USC's Fisher Museum of Art, is the first solo show in the United States for Miri Chais, an Israeli-born artist who now lives in Los Angeles. For the show, Chais created and installed a room full of paintings and sculptures, as well as objects that have screens embedded in them, all of it accompanied by music (much of it composed by her 15-year-old son) and a looped video displayed on the walls behind and surrounding her works. It is a total environment that Chais explained by saying, "I want to control everything."

Chais describes herself as a "post-Internet" artist, by which she means that she makes work that reflects upon a world where much of our culture is played out on screens, and in which our real-life experiences are affected by what we experience online and on screens in two dimensions. "Re:Mind," Chais said in an interview, "is about different states of mind ... and the different things that can influence our mind."

Her work, which is harder to describe than to look at, combines brain scans with images related to technology. So, for example, there are paintings in which a large human skull is outlined over what looks like kudzu-green marshes, with drips of black acrylic paint applied to the canvas as well -- the total effect of the juxtaposed imagery makes us question what the artist has in mind -- literally.

Chais often appropriates images from various science-fiction films such as "The Matrix," and she incorporates found images and film clips from various public domain archives, then places them into her art in the various formats of paintings, sculpture and digital prints. Chais' work is meant to make us consider whether the reality we see, even the memories and thoughts we have, are machine-influenced, man-made or both.

USC's Fisher Museum was founded in 1939 and is open to the public with free admission. Situated on campus, the museum is part of the Exposition Park complex of museums, and contains a permanent collection of some 1,800 objects, including works on paper, paintings and sculptures, ranging from the 16th century to the present, including from Elizabeth Holmes Fisher's original bequest, as well as from the Armand Hammer Collection and more recent donations.

Holo explained that as a university museum, its mission is very involved in and excited about the possibility of breaking down walls between disciplines" characterizing the museum as both "interdisciplinary and trans-displinary." It's also an apt description of the multimedia universe of Chais' art, in which eagles fly and a totem called Golem stands displaying video of both Tony Robbins and Jeff Koons; Chais creates a challenging environment, specific and metaphoric, local and global, that speaks not so much to who Chais is,as to what she thinks.

Chais was born in Ashdod, Israel. She originally pursued a career in advertising, however, in her 30s, she decided she wanted a change and went to Hamidrasha College of Art in Kfar Saba. She worked mostly in painting and photography; the installation she did for her graduation was shown at Beersheba University, where it received a
positive review in the Haaretz newspaper, launching her career.

In 2011, Chais moved with her husband and their children to Los Angeles (where her husband is from) and she said she is enjoying being here. She has found L.A. welcoming and supportive: She has a studio in Inglewood's Beacon Art Center, where she gets to meet other artists and feel part of an artistic community.

Chais has come to appreciate the light in Los Angeles, as well as the intangibles of Hollywood's "dream factory." Given that much of her
work is an inquiry into images and the cultural impact online and onscreen, as well as science fiction and science fact, she can think of no better place to be than in Los Angeles and Hollywood -- with its image- making industry that also strives to impart meaning to the visual. Chais has found in L.A. a place "where you have the freedom to interact with so many things that inspire you."

Los Angeles also has affected her work. Prior to moving here, she was interested primarily in the two-dimensional nature of screen-driven llives. L.A. has inspired her to create in three dimensions, not only by iincreasing the texture added to her paintings and sculptures, but by now conceiving of her work as creating environments -- as she has done for her USC exhibition. To put it another way: An art exhibit about thinking and being in a post-Internet world at a university art museum seems quite apropos."

In conjunction with the exhibit, USC has scheduled several programs, including a conversation between Chais and and Fisher curator Ariadni Liokatis, on Oct. 7 at 7 p.m.; and on Oct. 15, Andrew S. Gordon, a professor in USC's Computer Science department, will give a lecture titled "Mind Reading for Robots" on current research into how our mind works. (That one will be presented in collaboration with USC's Israel Initiative for the Arts and Humanities.)

Holo hopes to engage further crosspollination between the faculty and Chais in both student and public forums. "She will have a lot of intellectual backup here, to see how her world resonates in a larger intellectual context," Holo said.

"Re:Mind" continues through Nov. 15 at USC's Fisher Museum of Art
This article appeared originally in The Jewish Journal of Los Angeles