International Children's Day 2015 marks the 90th global celebration of the rights and well-being of children around the world. It is a day dedicated to not only celebrating, but also appreciating, the role children play in the future of all communities around the world.

Celebrating children, while internationally recognized almost a century ago, is something we continue to struggle with on a universal level. While globally we proclaim dedication to Education for All and the Universal Rights of the Child, many countries, as is the case in Cambodia, continue to fail the next generation of leaders in the basic rights of a quality education that will provide them with the necessary skills and opportunities for a more prosperous future than their reality today. The responsibility for providing children with the ability to capitalize on the possibilities of the future lie in the hands of those of us capable of making significant changes in the opportunities for growth and exposure to new and innovative ways of thinking.

The opportunity to educate a child begins at birth. From the time children enter this world, they listen, they watch, they explore the world around them. Their world starts small, with only the ability to recognize their mother's face or the smell of the people that take care of them. That world grows quickly, and within a few short years children are able to broaden their educational possibilities to include an understanding of the families and communities that construct their very sense of life on earth. Setting a strong foundation for a lifelong love of learning is critical in the early years to ensure future success.

Yet, many educational programs overlook the importance of early childhood education and are instead dedicated to supporting students in secondary or upper levels, the levels in which many students are at the brink of dropping out of school. 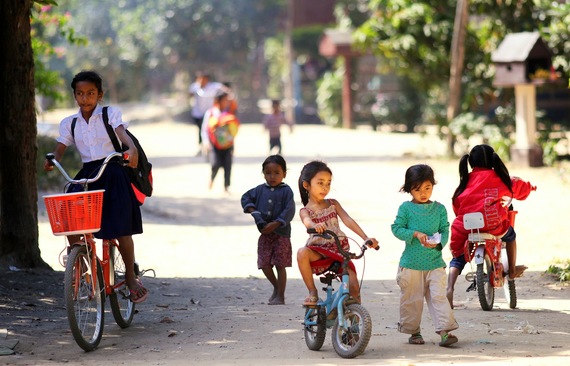 While net enrollment rates in Cambodia for primary school are 95 percent, those numbers fall dramatically to 32 percent for lower secondary school, grades 7-9 (USAID, 2014). The three-year piloting program, "USAID Asia and Middle East Regional School Dropout Prevention Pilot (SDPP) Program," in four countries including Cambodia, India, Tajikistan, and Timor Leste, is a fifty-one million dollar commitment to reducing the dropout rate in primary and lower secondary school through installing computer labs and other incentives to keep students in school. The European Union recently announced over 40 million USD investment for 2014-2016 focusing on increasing lower secondary enrollment and preventing dropouts, and an additional 150 million USD investment through 2020, with a promise to include ECE as a component of that investment. Yet, the amount allocated to ECE development is unknown, and if past and current investment is any indication of priorities in funding, ECE will lose out yet again. Large investments at the secondary level, such as those mentioned above and many others, are a stark contrast to the to the less than one percent of the educational budget in Cambodia dedicated to ECE for the 2014-2015 school year. While the funding provided by USAID and the European Union are sure to provide insight into the current state of education at the lower secondary level, they fail to address the root cause of failures for students in grades 7-9.

The high dropout rate in lower secondary school is not a lack of motivation, but instead a lack of foundational knowledge at the preschool and primary levels. Approximately 1/3 of dropouts and 1/5 of at-risk students said they were unable to keep up with their lessons in grades 7-9 (USAID, 2014). Students who drop out or who are at-risk have high absenteeism, and 66 percent of their parents keep their children home from school even when they are not sick. Regardless of the programs in place at grades 7-9, such as those mentioned above, these students are not going to stay because they cannot keep up with other academic requirements and there is a deficit of parental investment in education. By the time these programs are implemented in lower secondary school, it's too late.

While there is no doubt that these programs benefit students, there is a more effective and comprehensive approach to keeping students in school. Research indicates that children who participate in ECE programs are more likely to enroll in Kindergarten at the appropriate age (Sachdev, Szmodis, & Eng, 2014). The World Bank's report pointed out, "Early childhood education requires renewed policy attention as there are multiple economic, equity and efficiency benefits to investing in this level." It further noted, "Organized quality childcare benefits women, especially those with low incomes, enabling them to work outside the home. Children who have benefitted from early childhood education are also likely to do better in higher education levels. The evidence from Cambodia about the decline of cognitive ability of children due to the lack of quality childcare programs is stark and disturbing" (p. 53).

While Cambodian educational policy indicates a commitment to ECE beyond the nominal amount allocated for the proposed ECE programs, there is an established system already proven successful, ready for dissemination to all government schools. For the past ten years, Caring for Cambodia (CFC), an NGO partnering with Cambodian government schools in Siem Reap province provides ECE parent-facilitated preschool programs in the villages surrounding the schools they work with. The preschool curriculum framework emphasizes "whole child" approach, focusing on development of: (1) thinking and learning, (2) physical well-being, (3) social/emotional, (4) communication. Currently the program serves 331 mothers and 469 children with a total of 67 groups, meeting on a weekly basis. 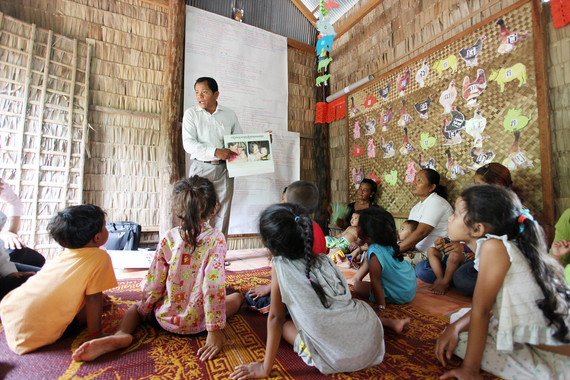 Our research indicated that the majority of parents sending their children to CFC school enrolled them on time -- only 7 percent enrolled their children later than the age of 6 (the legal age of first grade enrollment). At the national level, according to the education statistics in 2008, UNICEF found that at the age of six, seven, eight, and nine years old, respectively, 61.8 percent, 33.5 percent, 15.6 percent, and 8.7 percent of Cambodian children have never attended school, which is a significant factor contributing to the problem of late school enrollment. UNICEF further noted, "The consequences of this delay are serious, and convincing families to enroll children at a younger age should be a point of policy emphasis, beginning with qualitative research to understand more about parental reluctant to enroll children on time."

Mothers who participated in the CFC's Early Childhood Education program commented that the program has had a positive influence on their interactions with their children, saying that they "used to hit or scream at their children... now, this has changed." Some other mothers said, "The children have learned how to make better choices, listen, play well with others, and have become more polite." Many also confessed, "We call children to come and learn, when before we just let them go away. Now we let them help and explain why. We teach them many things." Parents also mentioned that preschool program allowed their children to become "brave," indicating that their children are socially and emotionally ready to go to school (Sachdev, Szmodis, & Eng 2014).

Further, participating parents tended to show (1) greater academic aspirations for their child's education and (2) have firm beliefs about the value of education emphasized by their community, compared to non-participating parents. Finally, participating parents also showed lower levels of gender role attitudes compared to non-participating parents in the following items: (1) family decisions should be made by men (11 percent vs. 33 percent), (2) wife should tolerate being beaten to keep family together (3 percent vs. 14 percent), and (3) wife does not have the right to express opinions (2 percent vs. 8 percent). The above findings were published in the National Council on Family Relations' Report magazine (Sachdev, Szmodis, & Eng, 2014). Empirical evidence also showed that Cambodian parents of elementary school children who report lower fatalistic beliefs tended to show higher levels of academic involvement, parent-teacher contact, and parent-school meetings (Eng, Szmodis, & Mulsow, 2014).

Our research team led by an Early Childhood Educator, Anu Sachdev, and her colleagues who have involved with the program extended their explanation to the social capital creation based on the ECE programs, "The preschool program provides a forum for parents to share information, to network, and to become informed about events such as vaccination programs that occasionally happen in their villages. Home-based preschool also offers an outlet for mothers to exchange ideas about parenting. The model informs the field about the importance of using the home and community as an effective context for early education, building collaborative partnerships with families, communities, and the government. Overall, the preschool program supported by CFC has created social capital for the community at large that fosters parent participation in their children's education and the norm of valuing education. While educational success is usually measured by a benchmark of access and performance statistics, changes in the community starting with people's perceptions and attitudes toward education (e.g., trust or norms believing in educational investment) are equally important as tangible resources" (Sachdev, Szmodis, & Eng, 2014). 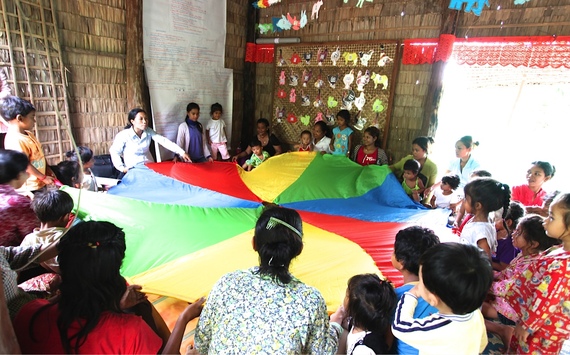 The responsibility to provide a strong foundation and opportunities for success lies in the hands of educators today. Children need advocates to give them a voice, to tell the world that they are ready, willing, and able to be the leaders of tomorrow, which is why we need to foster a lifelong love of learning for them today. That does not begin in their early teenage years. Rather, that begins with their caretakers, family, communities, from the day they are born and is supported through educational programs when they are young and in preschool, providing a transition and strong foundation from learning at home, to learning in school, and a life full of new knowledge and growth for the rest of their lives.

While perhaps there is validity to the promises made by the European Union and Cambodian ministry of education to commit additional funding in the future for ECE programs, little has been done to show movement in that direction. In the mean time, millions of students are entering the school system without the benefit of these valuable ECE programs, creating yet another generation of students who will not have the opportunity to begin their educational career with a strong foundation for success.

--
Whitney Szmodis is a Ph.D. candidate in Teaching, Learning, and Technology at Lehigh University, Bethlehem, Pennsylvania. Her area of research focuses on the gender disparity in STEM education and the role that socio-cultural factors play in girls' aspirations to their future careers. She can be reached at wes307@lehigh.edu.

Sothy Eng is Professor of Practice in Comparative and International Education at Lehigh University.