Wednesday is Internet Slowdown day, and some of your favorite websites may look a little different -- but they probably won't be any slower.

Netflix, Reddit, Tumblr, Etsy, The Nation, Boing Boing and many other websites are displaying the "wheel of death" to show their support for net neutrality, or the idea that all web traffic should be treated equally. But none of the sites have actually slowed down, so feel free to binge watch those old "Scandal" episodes.

Netflix's home page looked something like this. We've circled the relevant bit in red:

"The Internet is slow enough already," said Evan Greer, a campaign director at Fight for the Future, a nonprofit that helped organize Wednesday's protest. "Our goal is to prevent that from continuing." Greer's group joined with the nonprofit Engine Advocacy, political action group Demand Progress and consumer group Free Press Action Fund in persuading nearly 10,000 websites to participate in the day's slowdown.

The symbolic action comes just days before the Federal Communications Commission closes off the opportunity for Americans to comment on its proposal that would allow for an Internet fast lane. A fast lane would let some websites operate at higher speeds and essentially relegate many sites -- likely smaller, less-moneyed ones -- to a slower pace. The FCC is taking public comments on the rules until Sept. 15.

The hope is that just the thought of a slower Internet will spur people to action. The advocacy organizations want people to display the logo on their Facebook or Twitter profiles, or to use the links in sites' embeds to contact the FCC or sign a letter to representatives to ask for net neutrality to be protected.

"It's encouraging to see so many prominent companies participating in the day of action in support of an open Internet,” said Evan Engstrom, Policy Director at Engine, in a statement. “The FCC needs to know that preserving strong net neutrality rules is necessary to ensure that the Internet remains a platform for innovation and economic growth."

The worry is that if neutrality goes away, cable providers would charge "tolls" for VIP web speeds. Many people have criticized Comcast for just this reason, after the cable giant signed a deal with Netflix earlier this year to give the streaming service a fast lane. Yet Comcast isn't arguing against net neutrality. “Comcast supports an Open Internet and net neutrality," a company spokesperson wrote in an email to The Huffington Post.

"We reluctantly signed interconnection agreements" with Comcast and other large Internet providers, a Netflix spokesperson told HuffPost in an email. Netflix has been an outspoken supporter of net neutrality. "Strong net neutrality rules are needed to stop Internet service providers from demanding extra fees or slowing delivery of content to consumers who already have paid for Internet access," the company said in a statement.

Though Google isn't technically participating in Wednesday's protest, the site is aligning itself on the side of net neutrality. In an email sent out on Tuesday morning, Google voiced its support for the effort:

"If Internet access providers can block some services and cut special deals that prioritize some companies' content over others," Google wrote, "that would threaten the innovation that makes the Internet awesome." 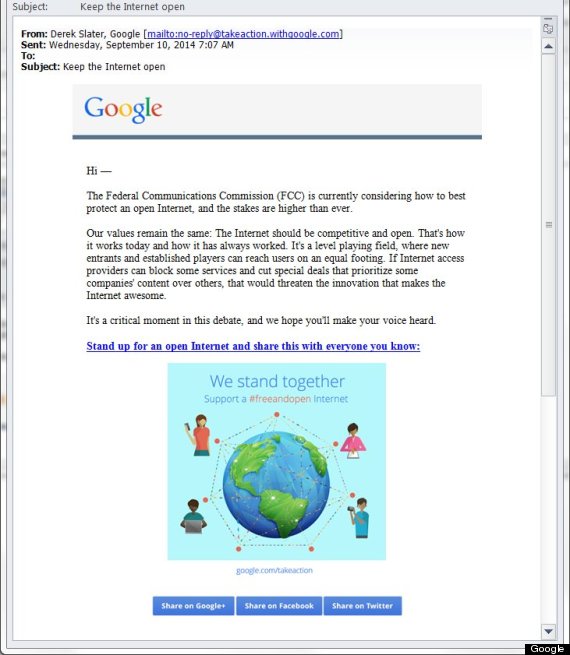 Facebook, obviously a major voice in the tech space, did not have a slowdown logo on its site as of Wednesday afternoon.

Tumblr is running a short blog post displaying a wheel of death and offering users a nifty submission form that easily lets people send feedback to the FCC.

In a blog post earlier this week, a Reddit co-founder called a web without net neutrality a "Clusterfuck."

If you want your voice to be heard in the debate over net neutrality, you can email the FCC directly or use this form on the Electronic Frontier Foundation's Web site. You can also buy this T-shirt with a picture of a cat and the words "Team Internet," which is what Reddit co-founder Alexis Ohanian is calling his side of the debate.

This story has been updated with a comment from Netflix.