Remember the name Duke Bojadziev because very soon this New York based music composer, producer and pianist will join the company of Hans Zimmer, Ennio Morricone and James Horner as one of the world's most acclaimed film scoring virtuosos.

Born and raised in Macedonia, Duke began playing the piano at a very early age. Taking after his father - who balanced successful careers in both music and medicine - he earned his medical degree while simultaneously cultivating his passion for music. Deciding to pursue music as a full time career he than moved to Boston to attend Berklee College of Music. Upon graduating in 2001, he moved to NYC and jumpstarted his trajectory as a musician. 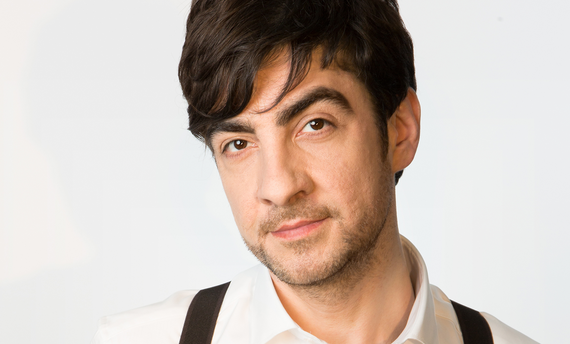 Among his credentials are working alongside Oscar-winning film directors Jonathan Demme and Danis Tanovic, as well as oscar-nominee Stole Popov.

A month before his 8th October concert with the Macedonian Philharmonic Orchestra at the Carnegie Hall in New York, I sat down with Duke to discuss his music, future ambitions and his ultimate dream goal.

Your biography says that you are composer, producer and pianist but If you ask me, you are the first person that has the capacity to bring the Macedonian harmonies and music style to the global audience. What would you say about this?

I grew up in Macedonia with everything but folklore music, from jazz to classical, from music of 50's and 60's to all of the electronica of 90's. I discovered the beauty of the Macedonian traditional music much later in my development as a musician. When I actually left the country and became able to see it from a very different perspective, is when I started appreciating it the most. Nowadays, especially in my film scores and live performances, it is very often present as a musical element and signature of my work. Developing my international music career helped to promote that influence on a much wider scale.

There is something really specific about the Balkan music and sound but it seems that the music from this region still does not have the global success it deserves. Why do you think is that? Do you think the typical Balkan melody has the potential to reach global audiences?

It has the potential. Balkan Beat Box is one of the examples of bands with lots of Balkan influence that made an international career. But I think there is much more to explore. Balkan melodies have very strong and specific musical stamp. That fused with other genres (electronica, orchestral, pop...) can be very unique sounding, when used with taste. The point is not to sound as a traditional Balkan music, but to implement elements from it. 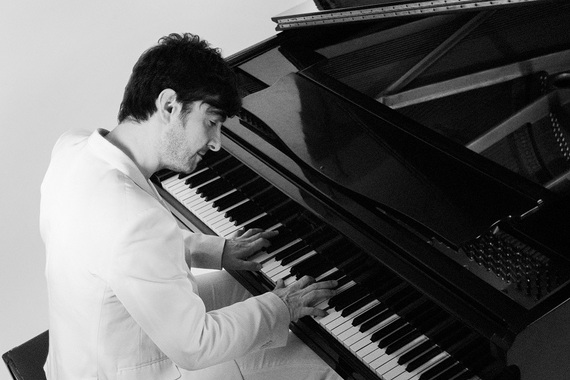 The location doesn't determine your success.

Very few people from the Balkan region have made it big globally. What do you think is the key to international success? Is it just the talent or there is so much more into it?

There is much more to it. Talent is a starting base to be motivated to move forward, but it takes a lot of work to develop and craft that talent into a unique professional artist. Takes a lot of carriage and self-motivation to go through all the obstacles that an artist has in the process of the development. You need to appreciate your competitors and learn from them. Good social skills and positive attitude always helps. And the most important is to have confidence and trust in your work. Be always true to yourself.

You are living and working in New York. Do you think that if one wants to reach international audiences, he has to move to the meccas of international show business and the movie industry like New York, London and Los Angeles?

Not necessarily, but it is very helpful for your career to be where the most is happening. The chances are much higher. But the location doesn't determine your success, it is your working discipline and ambition to always move forward and learn.

Your work on Stole Popov's movie to The Hilt is outstanding. The critics panned the movie but loved the music. Can you take us through the creative process of creating the score for the movie?

Every movie is a different story, sometimes you start with reading the script, or sometimes you enter the process after the film is shot and there is at least a ruff cut. The last was the case with "To The Hilt" by Stole Popov. Once I saw the movie I got so inspired, I wrote the themes in the next few days on a piano. After that it took me 6 months of hard work to orchestrate, record and edit everything to work perfectly with the picture. 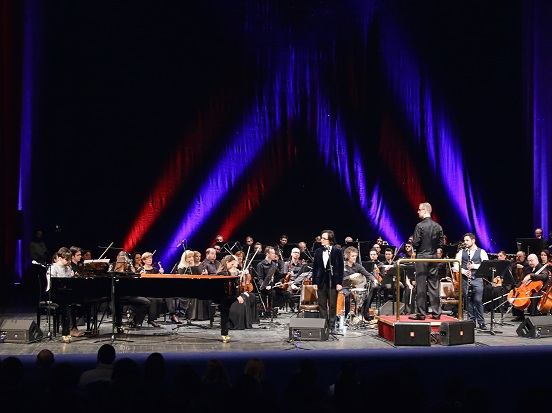 Duke with the Macedonian Philharmonic Orchestra.

Many say that creating movie score is the hardest thing for a composer because on one side you have the vision of the director and then your vision as a composer. How do you connect these two?

Scoring for film requires the most skills as a composer, you need to learn and understand how music works with picture, than understand the orchestra and how to properly use it, than implement it all together. In my scores I usually treat sounds as the director treats the actors. Each of them has it's own role that is following the development of the characters. Scoring for film for me is the most complex and most exciting process in my creative work.

What is your favorite movie soundtrack or maybe a movie score that you wish you had written?

Where do you find your inspiration? What composer is an inspiration for you?

I sit on the piano, take a deep breath, turn my brain off and connect my heart to the universal source of love. Inspiration is all around us, you just have to see it with open heart and allow it to come through you. I turn it into music but there are so many ways to explore life through inspiration.

My drive to film scoring as a child were Vangelis and Ennio Morricone.

Your music can be heard on many different compilations and commercials and I am sure that you are proud of your achievements but I really want to know what your ultimate dream goal is. Maybe an Academy Award? A Grammy?

My ultimate goal is to be happy. What my career brings is just a result of me being happy and honest with my work. I don't care if it is a Grammy or I just make another person happy. I love doing what I am doing. The fact that I also make living of it, is my greatest achievement

Duke is next performing live on 8th October at the Carnegie Hall together with the Macedonian Philharmonic Orchestra.