In what is said to be the worst in recent memory, a massive week-long sandstorm descended on Iraq last week, sending hundreds of people to the hospital and forcing Vice President Joe Biden to cancel his plan to visit Kurdistan. From Reuters:

"We are on alert. This is the worst dust storm we have ever had in Iraq," said Doctor Jasib Lateef, operations manager at the Iraqi Health Ministry. "A large number of people are turning up at emergency rooms at hospitals, challenging our resources."

A NASA satellite picked up images of the dust storm from space that reveal its sheer scale, covering a vast swathe of northwestern Iraq. According to NASA's Earth Observatory website:

Dust plumes hovered over most of Iraq on July 3, 2009, as the Moderate Resolution Imaging Spectroradiometer (MODIS) on NASA's Terra satellite passed overhead. This true-color image shows thick dust between Syria and the Iraq-Iran border. Over northwestern Iraq, the dust takes on a strangely textured appearance: a combination of small bumps and curving waves. Air currents likely sculpted the upper layer of the massive dust cloud.

Check out the image: 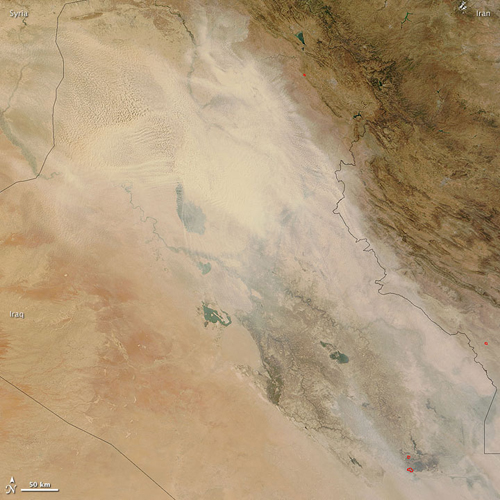 The image includes international borders, with Syria to the west, Iran to the east, and Saudi Arabia to the southwest, to give a sense of the storm's location and size.