Update Feb. 23, 2015: The legislation forcing approval of the Keystone pipeline heads to the President's desk this week for the veto he has long promised. The bill did not pass Congress with enough support to override the veto. Also of note, a series of important documentaries by Leslie Iwerks on the Canadian tar sands are now available through streaming service online. (I was interviewed for "Pipe Dreams," which focuses on the Keystone pipeline).

When Sen. Mitch McConnell (R-KY) took over the reins of the Senate, he wasted little time in choosing the Keystone oil pipeline as the first item for the new Congress. He may be having buyer's remorse.

McConnell's problem is that 70% of the public - including 56% of Republicans and 54% of conservatives - support actions to deal with climate change. That means more clean energy and less carbon pollution from sources such as highly polluting tar sands oil, which would flow through the Keystone pipeline. Momentum is building, and not long ago 400,000 Americans took to the streets of New York to demand action, engaging millions across the nation through social media.

This past week, Senate Democrats began using the Keystone bill to expose the rift between Senate Republican leaders and the public on climate change. Sen. Sheldon Whitehouse (D-RI) secured a rare consensus in the Senate this week when 98 Senators supported a statement that climate change was real and not a "hoax." Even Sen. Inhofe (R-OK), who literally wrote the book claiming climate change is a hoax, threw in the towel. It was a rare concession that his attacks on climate scientists have become a drag on others in the GOP. 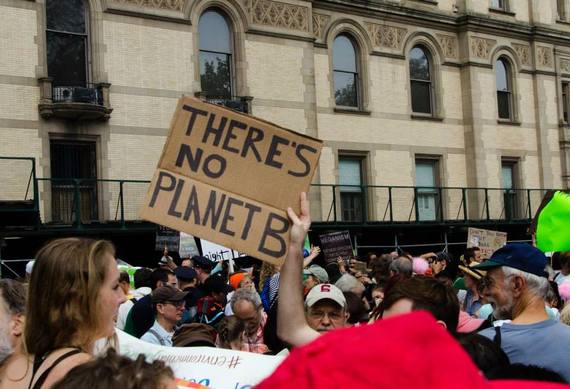 But acknowledging the climate is changing and that pollution is contributing to the warming are two different things, and Democrats continued to press. Voting on another amendment, 15 Republicans broke ranks with Inhofe and McConnell to affirm that "human activities contribute to climate change." The amendment, which was also supported by all Senate Democrats, cites the findings of respected scientific organizations, noting that warming is "unequivocal," and highlighting the following warning:

"A warmer planet causes large-scale changes that reverberate throughout the climate system of the Earth, including higher sea levels, changes in precipitation, and altered weather patterns."

Supporters included Sen. Mark Kirk (R-IL), who was loudly criticized earlier this month when he questioned whether pollution is impacting warming. The quick reversal underscores the conflict between Senators like Kirk, who are up for re-election in 2016, and the GOPs climate bubble inside the Beltway, where leadership has close ties with lobbying giants such as the American Petroleum Institute.

Along with a strong showing of support for an amendment from Senators Rob Portman (R-OH) and Jeanne Shaheen (D-NH) to reduce energy use through better efficiency, these developments suggest a possible thawing in the rigidly partisan debates on climate change that marked the past Congress. They also reflect a growing recognition that voters from both parties want to conserve and protect the health of future generations.

Which brings us back to the Keystone pipeline, a project designed to carry tar sands oil from Canada to the Gulf. McConnell selected Keystone, which is supported by some Senate Democrats, in order to showcase an "open" process of debate and amendments in the new Senate, the kind of "serious legislating" he said had been missing under Democratic leadership. Thursday, McConnell shut down that process, seeking an early exit to what was becoming an increasingly uncomfortable topic.

How low has Keystone's political stock fallen? The pipeline has historically polled well, but that has begun to change. According to a new Washington Post-ABC poll on Keystone, just 34 percent of Americans say, 'Build it now.' That's a sharp reversal from earlier Keystone polls.

There is no reason to believe that Keystone's freefall will stop. To the relief of families across the nation, gas prices are plummeting. This strips supporters of a key, although purely symbolic, motivation for having the debate. Meanwhile, a new pipeline rupture has spilled 50,000 gallons of oil into the treasured Yellowstone River, and BP is drawing renewed attention to the Deepwater Horizon oil blowout as they fight fines in court.

The changing political fortunes of Keystone were on display this week during the State of the Union, when President Obama prodded the GOP on the pipeline, a topic he has largely sought to avoid in the past. "So let's set our sights higher than a single oil pipeline," he said. "Let's pass a bipartisan infrastructure plan that could create more than thirty times as many jobs per year, and make this country stronger for decades to come."

The GOP has scrambled to adjust their message. In the GOP response to the State of the Union, freshman Senator Joni Ernst (R-Iowa) never mentioned that Keystone was a "pipeline" or an energy project at all. She called it the "Keystone jobs bill." This is a long way from when I testified at the first two congressional hearings on Keystone, when proponents made fanciful claims about solving America's energy independence and high gas prices.

The public is right to yawn at the Senate Keystone spectacle. The president has promised to veto the bill and he has the votes to back him up. The American Petroleum Institute recently compared the Keystone pipeline to a centuries-old art masterpiece: the Mona Lisa. It is an absurd comparison that only oil lobbyists could conceive of, but one thing rings true: Keystone is a project firmly rooted in the past, just like our outdated national energy policies.

Congress should be doing everything it can to make affordable clean energy technologies more widely available, which would create far more jobs than Keystone, protect our climate for our kids' future, clean the air we breathe, and improve America's energy security. Instead of looking to the past on energy, it's time for Congress to work on the energy future Americans want and future generations deserve.