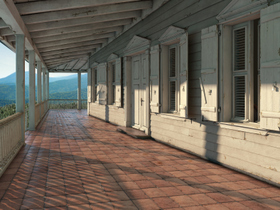 Art -- both making it and enjoying it -- seems a luxury in times of war. Yet the work of two Israeli artists, Orit Raff and Nir Evron, showing at the contemporary art space LAXART through Aug. 23, is not only a worthy distraction from the psychic weight of current events but also a testament to the power of art to transcend national identities, challenge assumptions and transport viewers to landscapes heretofore unimagined.

The exhibition is supported by Artis, a nonprofit that supports Israeli contemporary art and artists, and which organizes trips to Israel for curators and art professionals to meet their Israeli counterparts and visit artists' studios. It was on one such trip that LAXART's director, Lauri Firstenberg, first encountered Raff's and Evron's work.

Raff's LAXART exhibition, "Priming," consists of images of rooms, buildings and architectural details, each inspired by a different novel, ranging from contemporary works such as Donna Tartt's "The Secret History" (a haunting empty attic) to classics such as Gustave Flaubert's "Madame Bovary" (a bedroom with an unmade bed). The images are not literal representations of literary scenes but rather Raff's detailed visualization of the work, which she describes as "a translation."

At first glance, the images appear stark and challenging, like crime-scene photographs that prompt the question, "What happened here?" They are all the more remarkable because they've been created without a camera; each is painstakingly created on a computer -- none of the elements are from actual photos -- every detail, shadow and fold of a bedspread has been fashioned by Raff to create the verisimilitude of these imagined spaces.

As Raff explained, we live in a world awash in photographic images, where everyone takes photos and posts them -- but she wanted to explore "the territory that is uncovered," which she found in fiction. She said her work is a fiction, too -- but one that can be "read" as a photograph.

Raff, born in 1970, grew up in Jerusalem in a family that supported her interest in arts and culture. She took art classes and danced, but only became serious about being an artist when she attended Bezalel Academy of Arts and Design in Jerusalem. Despite it being "very male-dominated" at the time, Raff said, Bezalel nevertheless gave her a "very good and rigorous understanding of photography." After Bezalel, Raff attended the School of Visual Arts in New York, completed an independent study program at the Whitney Museum, and in 2003 received her master's at Bard College. All in all, she spent a decade in the United States before returning to Israel.

Like "Priming," Raff's prior projects explored issues in photography that reflect her "interest in space and architecture and how the body functions within these spaces." For an earlier exhibition, "Dislocated Land," Raff created abstract images by placing large stickers in rooms, then using high-resolution digital scans to record the accumulation of dust -- what Raff called "the traces of life." She then enlarged the scans, creating photograms in the tradition of Man Ray's "Rayographs" and Marcel Duchamp's "Great Glass." For Raff, this is "the most direct way of capturing nature."
Raff said her current exhibition has been influenced by her return to Israel.

Narratives that are not being told is also a theme in Evron's work "Endurance," the final film in a trilogy. Each film has an architectural reference and foundation, but explores issues of identity and existence differently. 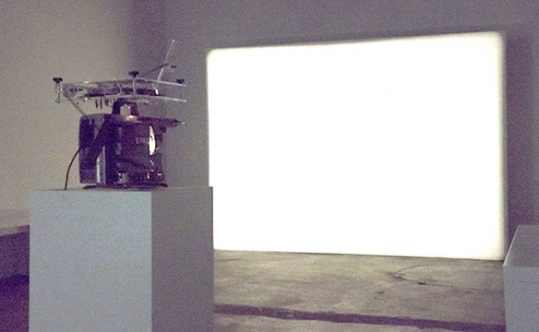 The first, "Oriental Arch" (2009), was filmed at the Seven Arches Hotel on the Mount of Olives in East Jerusalem and features fixed-camera 16mm film of the hotel as its many workers and few guests move through the hotel's public spaces. "Free Moment" (2011), was filmed at the unfinished summer palace of King Hussein of Jordan, which was abandoned during the 1967 Six-Day War and is now in Israeli territory; the film features long dolly shots that make the abandoned moribund space seem mysterious. Finally, "Endurance" is an abstract, camera-less work, recalling the early abstract films of Hans Richter or the Structuralists. It takes the floor plan of a model home in Rawabi, a planned Palestinian suburban community outside Ramallah, and translates its exact dimensions visually -- the rooms are black rectangles whose length corresponds to the time they are shown. "Endurance" is shown on a projector configured to run on a loop.

Evron's work, though abstract and without dialogue, nonetheless provokes questions in viewers that range from the artistic to the political. A recent discussion held by LAXART between Nir and novelist Michael Klein of CalArts to discuss "Endurance" became a freewheeling conversation about politics, capitalism and suburban architecture -- all prompted by Evron's work.

Evron was born in Herzliya in 1974, to parents who emigrated from Romania and Poland to then-Palestine in 1947. Evron said he started to take photographs as part of his job as an internal affairs detective in the Israel Defense Force. Later, while accompanying a girlfriend who wanted to apply to Bezalel, he discovered the school's program in photography and applied on the spot -- and was accepted shortly thereafter. After Bezalel, he received a master's from the Slade School of Fine Art in London, where he discovered experimental film.

"They had a 16mm editing suite and equipment, and because I was trained as a photographer before the digital revolution I basically only knew how to shoot film, so the transition into moving image was really easy for me," Evron said. "I never made videos; I started immediately to make 16mm films."
Evron returned to Israel in 2005, and has had his work shown internationally, including at the 6th Berlin Biennale (2010), The Maison Européene de la Photographie in Paris (2012) and The International Center for Photography Triennial in New York (2013).

In both Evron's and Raff's work, one can see a rigorous intellectual inquiry, built upon extensive research and planning, and executed in a very deliberate and meticulous fashion. Raff's work is pictorial, while Evron's is abstract. Yet both are invented landscapes, rooted in architecture and reclaimed from existing texts or places in which, as Raff noted, "the imagination creates a reality."

It seems fitting that Israeli artists, born of a nation founded on an idea, whose very language is a revival and reinterpretation of ancient texts more read than spoken, should be engaged in the creative interpretation of spaces bearing meaning. Doing so reminds us, in this most difficult of times, that we, as humans, are endowed by our creator with that most human of qualities: our ability to forge a new reality.

"Priming" and "Endurance" will be on view through Aug. 23 at LAXART, 2640 S La Cienega Blvd, Los Angeles. For more information, visit laxart.org