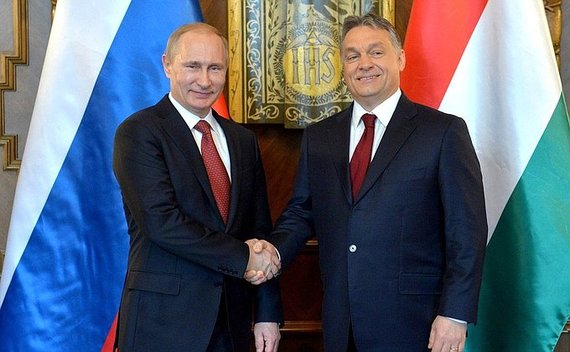 The Founding Fathers of the European Union (EU) believed that economic integration was the key to political prosperity in Europe. They integrated the coal and steel industries of Germany and France to disincentivize the main Continental European rivals from starting a Third World War. Since the modest start in 1951 the EU has grown into the most powerful regional bloc in the world, today counting 28 member states with a total population of 500 million people.

Despite the massive transformation of the EU, in terms of both competencies and territories, the underlying goal remains the same: ensure peace on the continent by furthering liberal democracy through economic integration. While the EU has always had some internal problems, such as the endemic corrupting in founding member state Italy, it overall did a good job at improving democracies in the member states and, particularly, in the aspiring member states. Using EU membership as the juicy carrot, it bolstered liberal democratic oppositions in aspiring new member states in East Central Europe, most notably Croatia and Slovakia, and forced through some important political changes (though much less so in Bulgaria and Romania).

Since the Great Recession shook its foundations, and for the first time led to serious questions about the future of (further) European integration, the EU has lost much of its interest in liberal democracy, instead reducing its mission increasingly to saving neoliberal economics and itself. Although the EU didn't create the rise of illiberal democracy on the European continent, its ambivalent and opportunistic position towards illiberal democrats has enabled it to grow into what has become a serious threat to the European project itself.

Today the European continent counts (at least) three powerful illiberal democrats. The most powerful is President Vladimir Putin, who has dominated Russian politics for the past decades. While Putin and his cronies are currently facing some economic sanctions, these only came after the military annexation of Crimea. For much of his reign Putin has been fêted by key European leaders, including powerful former prime ministers like Silvio Berlusconi, Tony Blair, Nicolas Sarkozy, and Gerhard Schroeder. All were happy to forgive Putin for his authoritarian sins to further economic business interests, while using a largely imaginary ultra-nationalist threat to justify their support for "the lesser evil." Putin used this EU support to establish an iron grip on Russian politics and society and, when he finally lost most of his friends and protection within the EU, to start supporting anti-EU parties like the National Front (FN) in France and the Jobbik in Hungary.

The situation is not that different in Turkey, where Recep Tayyip Erdoğan came to power more than a decade ago, and quickly became a darling of EU politicians because of his claimed support for neoliberal economics and moderate Islamic politics. It didn't take long to see that Erdoğan might not be an Islamist, but he isn't a liberal democrat either. After marginalizing the internally divided secular opposition, he turned to the last remaining counter-power, the Islamic Gülen movement, which had helped him come to power. Using the full force of the now authoritarian state, including dodgy economic and legal pressure, the vast Gülen network of powerful individuals and institutions has been almost completely marginalized. Today an Istanbul court, like most tightly controlled by the regime, appointed a board of trustees (of Erdoğan cronies) to take control of its main newspaper, Today's Zaman, one of the last remaining critical media voices in the country. This comes on top of a recent surge in anti-opposition actions and intimidation under the guise of counter-terrorism and under the correct assumption that major international actors will not criticize the regime because they depend on Turkey in their fight against ISIS (US) or against refugees (EU).

Unlike Greece, which is bearing the brunt of the refugee crisis but is at the same time scolded by the EU for not doing enough to stop them from keeping them in Greece, Turkey has used the refugee crisis as a bargaining chip in the increasingly tense negotiations with the EU. In exchange for keeping the vast majority of Syrian refugees in the underfunded camps in Turkey, the EU pays the Erdoğan regime €3 billion and weakens its position to criticize the authoritarian turn in Turkey -assuming it actually wants to do that, which, from evidence of the past years, seems not really to be the case.

The third major illiberal democrat in Europe is Viktor Orbán, the prime minister of Hungary, who has been turning his country into an illiberal democracy since regaining power in 2010. Like Erdoğan and Putin, he gathered EU support by supporting neoliberal economics and, when criticized, pointing to the alleged bigger threat of the far right Jobbik party. In the first years Orbán focused almost exclusively on transforming his own country: rewriting the constitution, weakening institutional checks and balances, harassing opposition, and using economic and legal pressure to domesticate the media - very similar to his role models in Russia and Turkey. While there was some push-back from the EU with regard to banking and media reform, crafty politicking and political protection by the powerful European People's Party (EPP) ensured that Hungary's transformation into an illiberal democracy was hardly affected.

But as the EU was too occupied with fighting the economic crisis and saving the big banks, Orbán was not just transforming Hungary, he was inspiring illiberal democrats in other countries - including governments in Croatia, Poland, and Slovakia - and plotting a challenge to "multicultural" Europe. The refugee crisis and terrorist attacks of 2015 gave him the opportunity to mount that challenge, which has been very successful so far and is still growing. German Chancellor Angela Merkel's open approach to refugees is practically dead, and the once most powerful woman in Europe is now facing mounting critique in Germany, including in her own party. At the same time, Orbán has been able to unify the four Visegrad countries to oppose the EU redistribution plan and has become a major challenger to Merkel within the EPP.