Twice in the past four years, the Nobel Peace Prize has gone to leaders trying to prevent nuclear catastrophe. It's time we listened to their warnings.

In 2005, the Nobel Committee awarded the Peace Prize to the International Atomic Energy Agency and its leader, Mohammed ElBaradei, for their work to rid the world of nuclear weapons. In 2009, the Committee returned to this cause, giving President Barack Obama the prize, in part for his drive for nuclear disarmament.

We can expect that the media cycle will be dominated by cynicism and ugly political attacks. After the circus quiets down, we should think about what this award is really about: There is real danger out there. If we do not change course, nuclear bombs will explode in our cities. The Nobel Committee is trying to get our attention.

This is not about Obama. It is not about Bush. It should not be about domestic partisan politics, nor about who has the sharpest sound bite. 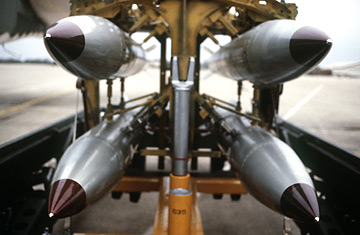 Understand this: These threats have grown over the past 10 years. Our policies are not working. They are making the problems worse. We have to change course.

The Nobel Prize is recognition of the international support for a new direction, for a new strategy of how to prevent new states and terrorists from getting the bomb and how to prevent any of the existing bombs from being used. This approach already has support from both parties, support among the American military and national security establishments, and support from many political leaders. Now, we are gaining the support of our allies and other major nations. This is a major gain for American national security. We need other nations to guard their supplies of uranium and plutonium the way we guard the gold in Fort Knox instead of the way they do now, like books in a library. We need all nations to reduce the numbers and roles of nuclear weapons and move away from weapons designed for the last century's threats. This will make our military stronger and our country more secure in the 21st Century. We must do everything we can to prevent this crucial national security issue from being swept up in hateful, partisan politics. As Leith Anderson, President of the National Association of Evangelicals said today:

I first heard the call for a world free of nuclear weapons from President Ronald Reagan when he addressed the National Association of Evangelicals over twenty-five years ago. The Nobel prize for President Obama acknowledges and perpetuates the Reagan vision.

Anderson demonstrates the true American spirit: rising above politics to embrace an honor for the nation and a call to action for the world. This is the tone of serious discourse, one focused on issues, not partisan conflict. We should all strive to turn our national security debate back to this tone and substance. The stakes are too high not to.