In his brand new HBO documentary Mr. Dynamite, Oscar-winning director Alex Gibney documents the rise of the Godfather of Soul, James Brown. Produced by Mick Jagger, the film documents Brown's pioneering musical work, as well as his philanthropy and his contribution to the civil rights movement. Ahead of its debut, some of his former musicians recall the highs and lows of their time with the star.

Levi Rasbury [Trombonist/Road Manager]: When I first saw James Brown, I had never been to a concert before. Imagine going to your first concert, and the star of the show comes sliding out of the curtains on one foot, to the center of the stage! And everything on the stage is moving. You got the saxophonists doing one routine, the trumpets doing another routine, three drummers, two guitars, a bass player -- and everything on the stage is moving. I saw him as being absolutely dynamic.

Jabo Starks [Drummer]: I had never seen anybody entertain that way. I knew Sammy Davis Jr could entertain for about an hour-and-a-half just by himself, but I'm talking about that way James was entertaining with his group; they constantly moved. Onstage with him, you had to constantly watch him. If you took your eye away from him, anything could have happened. The groove, the music -- each night it just seemed like it escalated.

Levi: It would take him at least an hour-and-a-half to recover from his performances. Usually, it would take two days for his tuxedos to dry.

Jabo: He was the epitome of entertaining. You just had to watch him. 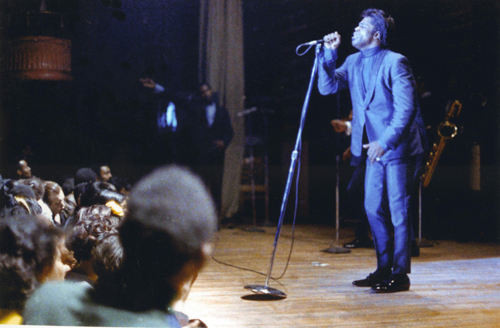 Photo by Emilio Grossi, used with permission of HBO.

Levi: Writing and putting together a hit song was something that Mr. Brown had a knack in. He understood what he needed to put into a song to make it sell.

Jabo: In the studio, we would play until he worked up a sweat like he was onstage, before he would let them start recording. With Sex Machine and things, he would have to work himself up into an onstage performance in order to record.

Levi: Papa's Got A Brand New Bag was my first recording with him. We recorded it at the Arthur Smith Studio in Charlotte, North Carolina. At the time he was making somewhere in the neighborhood of $1,700-a-night. We left, moving towards the West Coast, and by the time we got to Los Angeles, he was making $5,000-a-night.

Pee Wee Ellis [Saxophonist/Bandleader]: He was a leader and he had a vision we won't see again in this lifetime. He was the funkiest man in the world. He had more rhythm in his little finger than most of us have in our body.

Jabo: Everything that went down in that organization, he had rules for -- and if you didn't follow them, he fined you.

Clyde: I left three times because he would fine you if you made a mistake. Or if he thought you made a mistake. I was married. I had to pay bills. The last time I left was while he was onstage. That should tell you something about how strongly I felt. I was onstage and I said to Jabo, 'You watch. When Brown comes onstage, I'm gonna leave.' He said, 'You ain't gonna leave.' So we were playing for all these different acts and then Mr Brown came on to do his show and I said to Jabo, 'See ya,' and I got up and left.

Levi: You would get fined for dusty shoes, creased uniforms, missing notes. As the road manager it was my responsibility to take the fines out of their paycheck. He and I would have constant fallings-out about me not taking out the fines, because if I took the fines out, I was gonna be the person that that person depended on in having to take care of his family.

Jabo: If he was in one of his moods, I didn't really pay him any attention. I looked at him. I listened to him. It wasn't up to me to try to change what he was doing, the way he was feeling. I would just look at him. He would look at you as if he would want you to give him some kind of explanation or give him some kind of okay. I just didn't pay him that much attention, to tell you the truth.

Pee Wee: I think a lot of it was because he was small. He had an inferiority complex, so to counteract that he did present an imposing kind of a figure. He was a bully. It kind of went over my head at first, but the deeper I got into the business of the band, I realized that he was very self-centered and egotistical -- but hard-working and very demanding, which was a good thing, because that's how he got professional employees. So it all worked out good.

Jabo: I never paid fines. Guys would say, 'How come you didn't pay any fines?' And I would explain it to them: This was not a bunch of fun. He hired me to do a job, he told me how he wanted it done and I agreed to his rules. I knew what I was supposed to be doing. Nothing came in-between my doing that and nothing distracted me from doing what I had to do. And that was a thing when he hired you. He would tell you his rules and everything and if you didn't like it, you could shake hands and say, 'Okay, I'll see you, I'm gone.'

Pee Wee: I don't take bullying very well, so I let that be their problem, not mine. We're both Taurus and I'm just as much of a bully as he is. 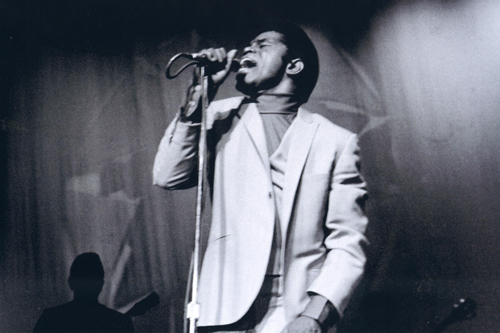 Photo by Emilio Grossi, used with permission of HBO.

Jabo: James had his good points, like everybody, and then James had some points that you didn't really particularly like or want to go along with. But basically, he was a good person. I learned a lot from James and a lot of entertainers have taken on a lot of things that he has instilled. I learned the business from James. He was strictly business when it came down to that music and his organization.

Pee Wee: I didn't have any idea that we were making history. In retrospect, looking back at it, I'm very pleased that the music has lasted this long.