Residents who live in the same apartment complex as suspected shooter James Holmes were still not allowed to return home as they expected on Tuesday since police said the investigation is not quite wrapped up yet.

More than 30 homemade grenades, 10 gallons of gasoline, improvised explosive devices (IED's) and trip wires or trigger mechanisms have been secured from the apartment.

An unnamed law enforcement official told CNN that grenades were wired to a control box in the kitchen, resembling setups that are more often seen in Iraq and Afghanistan. The official added that had the explosives gone off as intended, they likely would have knocked down the walls of nearby apartments.

Dateline's Chris Hansen reportedly got a peek inside and described what he saw with NBC viewers, remarking that the explosives were sophisticated enough to take the building down.

In the middle of his living room are dozens of black softball shaped firework shells that he bought filled with explosive power. They are all over the place. In the middle there are two jars full of liquid wires as I said all over the place there was a black box with a red blinking light. A mechanical camera then pans over on top of a glass table -- you see this water cooler jug half full of bullet. Then you pan down, then you see this black box with another red blinking light.
The camera goes over, there are two chairs one has a jar apparently with fluid. The other has another black box and then there are green soda pop bottles filled with fluid all the way around.

If the gasoline had been ignited, it would have created a deadly domino effect rigged to the opening of the front door.

Steven Foster, an International Security Expert and former officer with the Aurora Police Department told the Daily Beast that he suspects Holmes' plan was to create a diversion.

“This is a classic military tactic,” says Foster. “You create a diversion, and during the confusion you can have a higher level of impact in wounding people.”

Police are still not saying what chemicals were found in Holmes' apartment and Holmes is reportedly still not cooperating. 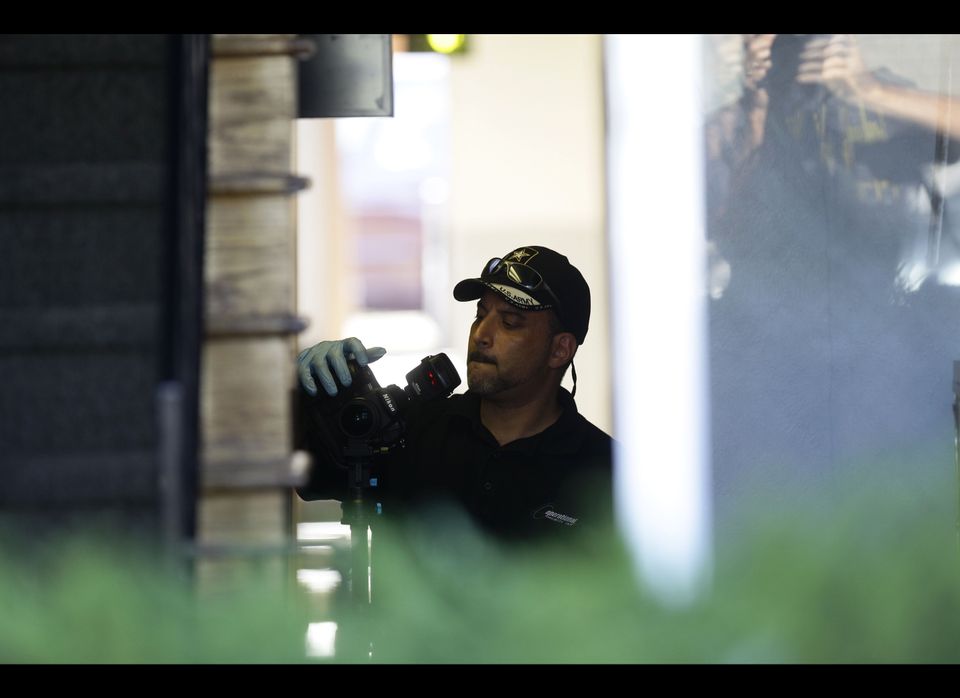 1 / 28
Colorado Community Mourns In Aftermath Of Deadly Movie Theater Shooting
AURORA, CO - JULY 24: A Federal Bureau of Investigation agent takes photos as he investigates inside the apartment building where suspect James Holmes lived July 24, 2012 in Aurora, Colorado. Holmes, 24, is accused of killing 12 people and injuring 58 in a shooting spree on July 20 during a screening of 'The Dark Knight Rises.' According to police Holmes' apartment had more than 30 homemade grenades and 10 gallons of gas inside that was booby-trapped to go off. (Photo by Joshua Lott/Getty Images)
Getty