The Federal Reserve is sounding increasingly alarmed about income inequality.

"The extent of and continuing increase in inequality in the United States greatly concern me," Fed Chair Janet Yellen said in a speech at an inequality conference in Boston on Friday. Her comments come just days after Swiss bank Credit Suisse warned that inequality in the U.S. is at levels that have been associated with recessions in the past, with one key measure at its highest level since the Great Depression.

Though Yellen didn't go so far as to echo Credit Suisse's recession alarm, she did warn that rising inequality risked doing serious harm to the overall strength of the U.S. economy. Yellen, too, noted that "income and wealth inequality are near their highest levels in the past hundred years, much higher than the average during that time span and probably higher than for much of American history before then."

"I think it is appropriate to ask whether this trend is compatible with values rooted in our nation's history, among them the high value Americans have traditionally placed on equality of opportunity," she said.

Patriotism aside, inequality is also a worry because of its ill effects on the economy. As Yellen noted, living standards have been "stagnant" for most Americans for the past few decades, an unhealthy development for an economy that relies mainly on consumer spending to drive growth. 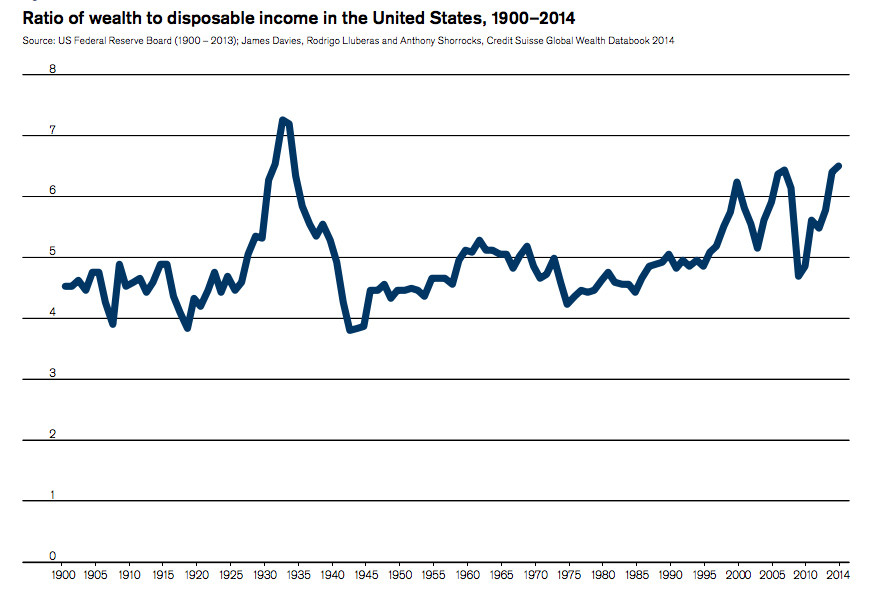 One key measure of inequality at its highest level since the Great Depression (Source: Credit Suisse)

And inequality tends to foster even more inequality, Yellen suggested, as the well-off tend to have better access to economic opportunity than the poor. And if the have-nots have fewer opportunities to climb the economic ladder, that hurts the general health and vibrancy of the economy.

Yellen's been warning about inequality for a while, telling Congress in February and in May that it was a "disturbing" trend. Congress, shockingly, has done nothing to address it.

On Friday she suggested a handful of possible solutions, including early childhood education, making college cheaper and helping entrepreneurs. Unfortunately, the Fed, the nation's central bank, has exactly zero control over any of those things, noted the Washington Post's Ylan Mui.

The Fed might even have made inequality worse, with stimulus measures that have boosted stock and bond prices, mainly a boon to the already wealthy. Yellen noted that the wealthiest 5 percent of Americans own two-thirds of all stocks, bonds, mutual funds and other such financial assets.

Even lower mortgage rates, one of the most direct Fed stimulus effects, have mainly helped people who already own homes or have credit good enough to buy homes. Many of those people are closer to the middle and bottom of the economic ladder, at least. But the small bounce in home prices since the Great Recession has been dwarfed by soaring stock and bond prices, and has done nothing for those homeowners' stagnant wages.