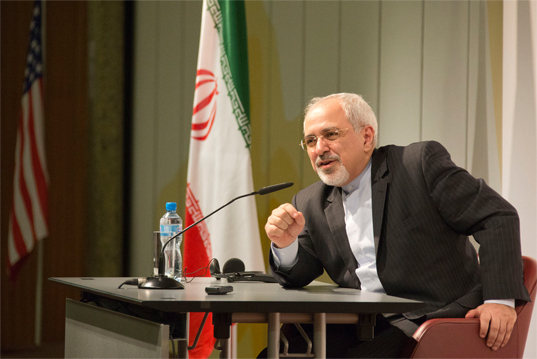 Javad Zarif is a name you may encounter in the media reports and news stories these days frequently. Aside from being Iran's Foreign Minister, a U.S.-educated diplomat and a social media connoisseur, he is now viewed by thousands of young Iranians as a savior and a national hero.

The 55 year old is credited with concluding one of the most far-fetched, elusive diplomatic negotiations of the contemporary history and clinching a non-proliferation deal that seemed an outright impossibility some three years ago and is now described as a blueprint: The comprehensive agreement over Iran's nuclear standoff, known as the Joint Comprehensive Plan of Action. Of course his U.S. counterpart John Kerry played an equally important role in making this unimaginable agreement a reality, and that's why the two were nominated for a Nobel Peace Prize, even though they didn't get it, perhaps due to the tenuous nature of the deal - as of yet!

Zarif's charming smiles in front of the cameras, which don't disappear from his face while he talks to high-ranking foreign dignitaries - entirely atypical and unconventional for Iranian diplomats known for their sternness, his native-like English fluency - again a rarity for the majority of Iran's politicians in the recent decades, his close familiarity with the think-tanks and influential policy-makers, media personalities and pundits in the United States and his intellectual prowess in presenting logical arguments and convincing his most ardent opponents in a persuasive manner all have made him the protagonist of President Hassan Rouhani's administration.

Zarif was on the Time's list of the 100 Most Influential People in 2015. The New Yorker's Robin Wright, who had been in close contact with Javad Zarif for several years, says he was the favorite Foreign Minister nominee of three candidates in Iran's 2013 presidential race. This is while President Rouhani primarily had other plans for the office of the nation's top diplomat, and after vacillating between a number of choices, including the former ambassador to France Sadegh Kharrazi and his Poland-educated colleague at the Center for Strategic Research Mahmoud Vaezi, he was convinced to nominate Javad Zarif, who eventually turned out to be the plus point of the cabinet.

Iran's Foreign Minister has spent much of his life in the United States - around 25 years. His son and his daughter were born while he was in the States. His English speeches are replete with idiomatic expressions and proverbs - which I, as a graduate of English Language and Literature, still cannot use in context smoothly!

Javad Zarif was the Permanent Representative of Iran to the United Nations from 2002 until July 2007 when Mahmoud Ahmadinejad removed him from his post less than two years after being elected president. However, he had been working with Iran's mission to New York since 1982, the same year he graduated from San Francisco State University with an MA in international relations.

Zarif was the first Iranian government official to sit at the negotiation table with an incumbent U.S. statesman following the 1979 revolution in Iran, which dethroned the U.S.-backed monarch Mohammad Reza Shah Pahlavi and ushered in a new era of hostility between the two former allies. Although some of Ahmadinejad's people, such as the former Secretary of the Supreme National Security Council Saeed Jalili, harbored whims for talking to the U.S. officials even secretly, they were never given the permission to do so by the Supreme Leader Ayatollah Ali Khamenei. Zarif, a long-time confidant of the Leader, got the green light, and met the U.S. Secretary of State John Kerry on September 26, 2014 on the sidelines of the UN General Assembly in New York. It was after that unprecedented reunion that the two foreign ministers developed an intimate personal relationship, exchanged emails and phone numbers and remained in regular contact until July 14, 2015 when the comprehensive nuclear agreement and the conclusion of negotiations between Iran and the P5+1 was announced. According to a State Department official, in about 2.5 years as the Secretary of State, John Kerry has spent more time one-on-one with Javad Zarif than with any other foreign minister.

Zarif is being attacked by the hardliners and peace-haters at home fiercely. His overtures to the United States, his conciliatory tone in talking to the world, his persistence in finalizing the nuclear agreement with the six powers - while a massive group of conservative MPs and media organizations bawled day and night in opposition to the deal, and even his smiles ruffle feathers and irritate the hardliners; however, what matters is that he is now loved by thousands of Iranians whose aspirations for a better future were crushed under the load of crippling economic sanctions and hazy, blurred relations with the community of nations. It just takes a few minutes to explore Persian-language political discussion forums online and realize how popular and well-liked he has become, especially following the announcement of the final nuclear agreement.

A May 18, 2007 report by the New York Times opened with this intriguing lede: "Javad Zarif has appeared at universities, public policy forums and social and political clubs so often that Lisa Anderson, dean of Columbia University's School of International and Public Affairs, recently asked him wryly if he was thinking of running for office!"

Javad Zarif is a name that both frightens and inspires. It frightens those who are unwilling to talk to the outside world and use the language of logic and reasoning to settle their disputes with their rivals. And it inspires those who have faith in the power of dialog, negotiation and peace. It frightens those who dislike conflict resolution and prefer to hide in the chambers of ignorance and stick to their inflexible dogmas. Javad Zarif spearheaded two years of intensive, breathtaking negotiations with the six world powers, including the United States, Iran's "Great Satan", to prove that progress and development don't take place in vacuum; they emerge through rigorous action on the ground and perseverance. Now, he has salvaged Iran from the cage of the economic sanctions that were paralyzing the lives of its people, and assured the entire world that under no circumstances in the far or near future, will Iran ever develop a nuclear bomb that will make the volatile Middle East more tumultuous and unsafe than what it is now. That's why he deserves acclamation.

Kourosh Ziabari is an award-winning Iranian journalist, writer and media correspondent. He has won three awards in Iran's National Press Festival. He is the recipient of three international journalism fellowships. Kourosh has conducted exclusive interviews with tens of prominent world leaders, politicians, diplomats, academicians, intellectuals, media personalities, authors, scientists and Nobel Prize laureates. A collection of his articles and interviews is available on his website.