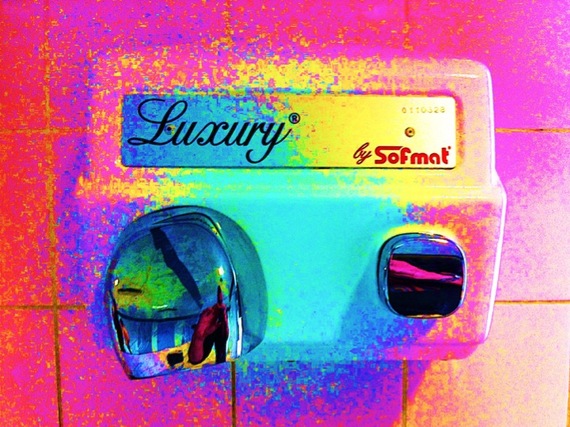 The Pompidou Center in Paris is showing a retrospective of Jeff Koons through April 2015. It will surely be a much talked-about stop for attendees of the haute couture and menswear shows in January and of Paris Fashion Week in March. The Pompidou's exhibit is the latest installation in the love affair between the French cultural elite and monumental conceptual art that has seen Koons' work displayed in the palace of Versailles and Paul MacCarthy dominating the posh Place Vendôme.

This love affair represents the ongoing convergence between the worlds of art and luxury. Their creative collaborations and cross-referencing - not to mention their shared population of the wealthy, global glitterati - can make it difficult to distinguish where one ends and the other begins. Luxury brands are a growing presence at events like Art Basel. And luxury has an established tradition of partnership with artists like Takashi Murakami and Stephen Sprouse through capsule collections and visual merchandising. In turn, artists like Koons, Sylvie Fleury and others take up luxury in their creations, reinterpreting Louis Vuitton bags, Hermès sadles and Gucci shoes as artworks.

"Luxury and Degradation" is a collection of these, residing at the Pompidou among more familiar Koons pieces, like metal balloon animals and porcelain pop-culture icons. As in those works, Koons plays on material transformation. Liquor ads are presented in oil on canvas and crystal decanters are translated in stainless steel. The curators explain that the works highlight discrimination between upper- and middle-class consumers and blur the lines between the luxurious and the prosaic. But beyond that vague analysis, they give us little.

The link between luxury and degradation is of course long-standing, at the core of society's love-hate relationship with luxury. And it is particularly relevant when money seems to be the force driving government, society and culture. There is a word for it - decadence - which is decay (or self-degradation) through luxury. It is interesting how Koons applies the word degradation here.

First, he points out that art (in this case as advertising) discriminates (degrades) the lower class by talking down to them with simpler symbolic terms than those addressed to the upper class. But this is not a particularly original insight. That people of means and thus education can relate to more sophisticated and nuanced imagery is well established.

Beyond that, it is less relevant in today's marketing context. All the works in this series date to 1986, the era of Wall Street and Dynasty and trickle-down economics. Today's approach to luxury marketing was still pre-nascent. LVMH was only founded a year later and Kering (Groupe Pinault at the time) was still in the wood and paper business. It was a decade before the visual codes of luxury in both advertising and product were picked up by brands like H&M, Zara, Ikea, Target and other mass-marketers in what became the democratization of luxury design. Notice the past-tense in Koons' interpretation "...that certain forms of art, including abstraction, were actually discriminatory, as they could only be appreciated by the upper echelons".

Second is Koons' rendering of luxury objects in stainless steel. This is arguably more interesting, but the museum's analysis misses an important point. The curators highlight that the glistening, "seemingly luxurious medium" blurs the lines between utilitarian and decorative objects. But stainless steel is common rather than luxurious. So it seems far more poignant that Koons simultaneously degrades the objects with a less noble material than the original ceramic, silver or crystal, and yet elevates them from product to artwork in the process. It exposes our hypocrisy in raising the value of something by stripping it of the workmanship and purpose it originally embodied.

Unfortunately Koons forbids us from going any further - in fact, we have already gone too far - by denying that his work contains any hidden meaning or critique. But then what are we left with? Given the factory model of his studio, where craftsmen produce the works instead of Koons himself, without commentary Koons is less an artist than the creative director of quirky decorative objects. He offers an aesthetic vision rather than an artistic one, giving credence to those who call him cynical and self-merchandising. As Mark Stevens wrote in The New Republic:

"[Koons is a] decadent artist [who] lacks the imaginative will to do more than trivialize and italicize his themes and the tradition in which he works... He is another of those who serve the tacky rich."

Ironically it is here perhaps that "Luxury and Degradation" is most powerful. Imagine that we do not take Koons' denial of critique at face value, but as part of his artistic performance. It makes for a devious ploy that elevates him as a conceptual artist and commentator (though it is far less flattering to him as a person). It is a calculated move to trap his fans into admitting their ignorance by extoling the virtues of and paying fortunes for works that Koons has set out as bait. He is cynically playing The Emperor's New Clothes with those he feels have more money than brains. In "Jeff Koons and the Art of the Deal: Marketing (as) Sculpture" (Performance magazine, September 1990), Andrew Renton points out that the artificial and gleaming surface of the stainless steel represents a proletarian luxury; seduction by simulation because it is fake luxury. And that, according to Koons himself, being the producer of this deception makes him a leader.

The words try to mask it, but this is where Koons tips his hand: Leading his acolytes into decadence. Now isn't that the ultimate degradation?