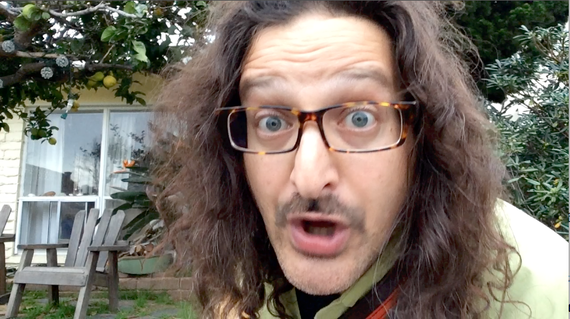 Stand-up comic and rock musician, Jefferson Jay is a fixture with a respectable following in some of southern California's grittiest and glitziest comedy, music and hipster dives. But what some of neither Jay's comedy nor music fans might not know is that the namesake and frontman of the Jefferson Jay Band is also the publisher of "largest '365 project' in the history of the World Wide Web."

Jay is currently in the home stretch of committing his music, musings, career and life to digital permanence three times every day for a year, from Christmas, 2015 to Christmas Eve, 2016. He did the same thing back in 2011. I asked the Ocean Beach (San Diego), Calif.-based artist what the project means in the grand scheme of things and why you should care. Here's what he said:

HuffPost
This reporter fully expected that your claim that yours is the largest 365 project in history would be easy to disprove. I was wrong! How hard is it to be entertaining on camera every day, three times per day?

Jefferson Jay
Who is always entertaining? Would one even want to be? On stage, I suppose. Usually worth watching works for me. I think of the 365 from this perspective. It is different from your standard entertainment. Not every moment you have with a friend will be entertaining. It is the time you spend together and the connection that you share that make it special.

It is the effort involved that makes the 365 matter. Many people can't get themselves out of bed these days. We are all susceptible to a bad day or a day in which we don't want to deal with anyone. Some folks are even convinced they can't do anything. I am no exception, but I force myself for a year to fight thought that and be there for anyone who's interested. The Operation 365 is for those folks...

I am available to folks, not only as a positive, friend-type human in their life. I show up every day...This is no exception.

How many times have you almost not made your goal--any unusual circumstances that nearly prevented publishing your third video of the day?
I did the first 365 from Thanksgiving 2010 to Thanksgiving 2011. I had a few close calls, but not so much this time. I didn't want to let the Operation 365 turn my life upside-down. It has the potential for that. This time, a more mature me takes care of business first and then gets to the more leisurely parts of the day, after my duties are done. Plus, even if I did struggle once or twice to meet my self-imposed deadlines, that's like a starlet's beauty secrets. That info isn't being revealed without extreme circumstances. Investigative journalists need something to do, right?

In the Epoch of the Selfie, the era in which we live, why is it that you are not known as The King of Front-Facing Media, given your commitment to 365-2
I do not know how I am the last remaining in secret on the Internet. Maybe I am scary and blackballed (laughs). Peace is a dangerous thought these days. That's all you need to know. Let's not even get into love. It's hard to bomb folks you love. I'm just playing. International Content Master... It has a nice ring to it. In all seriousness, I have no idea how I've stayed so far under the radar. There's guys who sit in their mom's basement and play video games and millions of people watch. People can tune in and check out what I'm doing. They can get involved and participate if they like. I have 1800 videos on YouTube. Caring is sharing. If people like what I say and what I do. They can check it out and share my unique and positive perspective with the folks they interact with online and in real life.

Music, love, kindness. These things have been made to seem soft and silly in the modern mainstream media world. I am all about those things. I am about being a positive neighbor and part of my community. To answer your question I am bringing the love. Anybody who's into that can bring the love back and we can get a beautiful thing going. I'm here posting videos til Christmas Eve.

The rules for the 365, as I designed them are: I post three videos daily; an original song (by me), a cover song (by anyone else) and some "Words" of some sort fort the day. No repeats are allowed from the first Operation 365. I used to record the shows I hosted and played for years. I had all this footage built up and I wanted to share it. I have a Master's degree from San Diego State in History and I especially enjoy the archiving, so I had all these videos of all these friends of mine and I wanted to share them. So the first 365 had "Archives" instead of "Words" as the third video. That and all the tunes I'd written and accumulated were the impetus for the first Operation 365. The Archived videos made the "Operation" more of a community thing and that is really what I enjoy most. So I got to share a bunch of love with some musical friends and I got to share those musical friends with whoever was watching. The blogs told the history of that time and a large part of my personal story as well. After that, I stopped filming so much, to avoid accruing a similar backlog. The "Covers" part has always been about bringing other people who might have no interest in any of this other stuff over to the 365 to check out a tune they know and love.

I have no idea on an Operation 365 3. I'll probably take a moment to reflect. It would be great to get paid through sponsorship or network TV deal for the huge amount of work that it requires. I have tons of different creative ideas. I have hundreds of original songs. I have nine special needs Christmas musicals I written. I've even directed two of them. I would love to find great uses for this content. I'd like to reach more people and help more. I love hosting events. Operation 365 is rewarding in a lot of ways, but there's tons of other things I want to do.

In all seriousness, is there a higher purpose that your serving with this project?
I am providing a positive example of doing things daily. I have set a high bar for content output and I reach it. Day by day. Step by step. I don't know what will happen. Maybe, I will reach a bunch of people. I am interested in positive social change. Unity and love. If any of this can somehow lead to more of that, that would be my first choice.

Finally, a week or so into the first 365, I realized that the videos needed more context. Each one carried stories that I was going to have to tell if I wanted that part of the work to be understood. So one week in to the Operation 365 1, I started blogging along with the videos. I kept that going. The week after the first 365 ended, I kept up with the blog. I finished 365 blogs, so I went one more week. The final week's blogs were a reflection and what was accomplished in the experiment.

The first 365 was an experiment. I didn't know for sure I'd finish, so there was that. Some friends had made a film called "Buzzkill." In it, they explored what 30 days without coffee would be like. They discovered that you are much more likely to keep doing what you're doing once you're doing it. Essentially, they socially tested the scientific laws of momentum and inertia. They were right. Humans keep doing what they're doing, even if it is about an hour and a half of video work. That's about how long the 365 takes me each day. Those final blogs explored some of the statistics about the 365. I spent about a month of that year, straight with no breaks, doing the 365, if you add it up. This one's no different I'd imagine.

This one is less of an experiment. I had withdrawn from the Internet a bit in the five years since the first 365. I wanted to reconnect with people and I wanted to challenge myself creatively. I have written over 100 songs that I would not have written through this project. I'll probably double that before it's over. I have also shared dozens of tunes I'd written since 2011. I don't like that thought of stuff not getting used at all. I'd rather release stuff and have it out there then have it sitting in my computer unheard.

What has been the typical response from your fans? What about detractors?
I am underground. Except for here in my hometown. This leads to few detractors. In some ways, that's nice. I have friends who say they watch my videos. Thanks, friends. Some other people have reached out and said some really heartfelt touching things to me about the work I've done for music, locally and with the 365. That means a lot to me. It is my favorite thing about this 365 so far, actually. Some have said my songs moved them.

I get the occasional negative comment on YouTube, but not nearly as many as everybody else. I usually answer them with "Thank you." No sense battling anonymous haters. 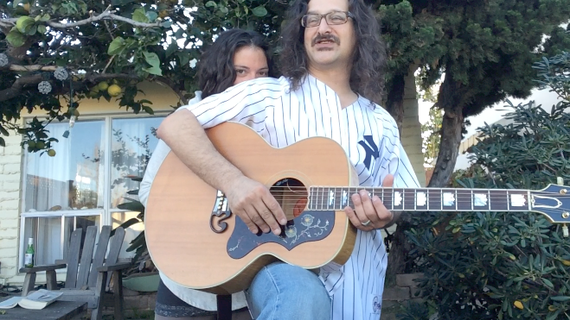 What would you like to add?
I have a band, The Jefferson Jay Band. The Band is comprised of my dearest friends including my wife, Leanne Pearl on the drums and unknown trumpet master Paul Ruiz. We are currently working on our 7th record, "The Best of Operation 365." It features a dozen of the best tunes out of the 211 I wrote for the first 365. If I can find the time to finish it, it will come out before this 365 is over. That was one of the thoughts I had in mind when I started this one. We play positive, eclectic music, which reflects much of the great music of the last 60 years, especially the 1960s and 70s. We bring the good vibe.

I host community events. I have a million ideas for clever TV shows, game shows, comedy stuff. I have an idea from a long-form interview show. Zillions of ideas I hope to someday have the backing for. I hope to reach and inspire more people with my unique and optimistic shtick, but until then, I love doing what I'm doing. I appreciate life. Living in Ocean Beach, San Diego, there are amazing people everywhere. I trust everything happens for a reason, even what that seems least likely.

You can find all things Jefferson Jay at JeffersonJay.com Project 365 is on YouTube and at the Project 365 Blog.