In November I had the opportunity to join a delegation of other entrepreneurs and angel investors in Jordan. The trip was organized by Partners for a New Beginning, a public-private partnership based at the Aspen Institute. During this trip I got to mentor dozens of local startups and their leaders, swim (float!) in the Dead Sea, meet and talk with the King of Jordan, take amazing photos of one of the 7 wonders of the world (Petra), kidnap a U.S. State Department employee (we took him drinking) and eat a never-ending supply of hummus.

However, the most important thing I did on this trip was learn. I don't think any trip I've taken has changed my worldview more than this trip. The four biggest things I learned are:

· If the Middle East can stay relatively stable for just 10-15 more years, entrepreneurship will have a major long-term positive impact on the social-economic future of the region.

· As the Middle East grows as a source of commerce and technology for the rest of the world, Arab women entrepreneurs will be the region's most powerful and differentiated asset.

· I previously did not understand what "Arabia" meant. I, like most Westerners, thought the Arab world was defined by a combination of geography and religion. I now understand how important the Arabic language is to what it means to be an Arab.

· There is very little adoption of electronic payment systems in Jordan and other Middle Eastern countries. Changing the structural and cultural barriers to using electronic payments will cause more economic growth in the region than any other factor.

In this post I discuss each of these topics. I don't claim to be an expert on the Middle East. I've visited Saudi Arabia, Dubai, Abu Dhabi, Israel, Turkey and now Jordan. I've tried to see as much as possible, to talk to as many people as possible, and to overcome my preconceived notions that I know are primarily based on a biased and ignorant Western education and press system. I'm well aware the Middle East region is so complex that no one can really understand it all and I've just barely scratched the surface.

I write these thoughts in the hope that they will make them more clear to me, and to challenge others to reconsider their perspectives, if only to seek out more knowledge on their own.

A Time Window for The Youth

The Middle East is undergoing significant population growth, and because of this something like 50-65 percent of the population is under 24 years old. I believe youth take more risks, are more prepared to look at things with a fresh perspective, and want to learn.

We, the world, have a relatively short time window to help ensure that the youth of the Middle East are educated and have access to technology. The more well-read they are the less likely they will be to take extreme views. The greater access to technology they have, the broader their perspectives.

As expected when on a trip designed to foster entrepreneurship, many of the people I met with were younger. I also know that many of people I talked with, were already biased towards action, being entrepreneurs, but I found a shocking (to me) sense of optimism and hope.

We also spent time in part of Amman that here in the U.S. we might call "on the other side of the tracks." Through Fadi Ghandour's amazing Ruwwad organization we had the chance to walk through one of the rougher neighborhoods in Amman and meet kids like these two school girls. The sense of opportunity and ambition was as palpable as the poverty.

If we (the world) can keep the wars at bay just long enough for the Middle Eastern youth to grow up educated and free we have a much greater chance and starting to erase some of the deep scars that predominate the attitudes in the region.

Face it, the news out of Saudi Arabia (women tracked by text messaging) and Afghanistan (girl beheaded), illustrates how poorly women are viewed and treated in the Middle East. It is highly ironic, therefore, that I firmly believe if the region can stay relatively stable over the next 10-15 years, it will become a technology power-house and one of the key differentiators will the number and quality of the women involved. 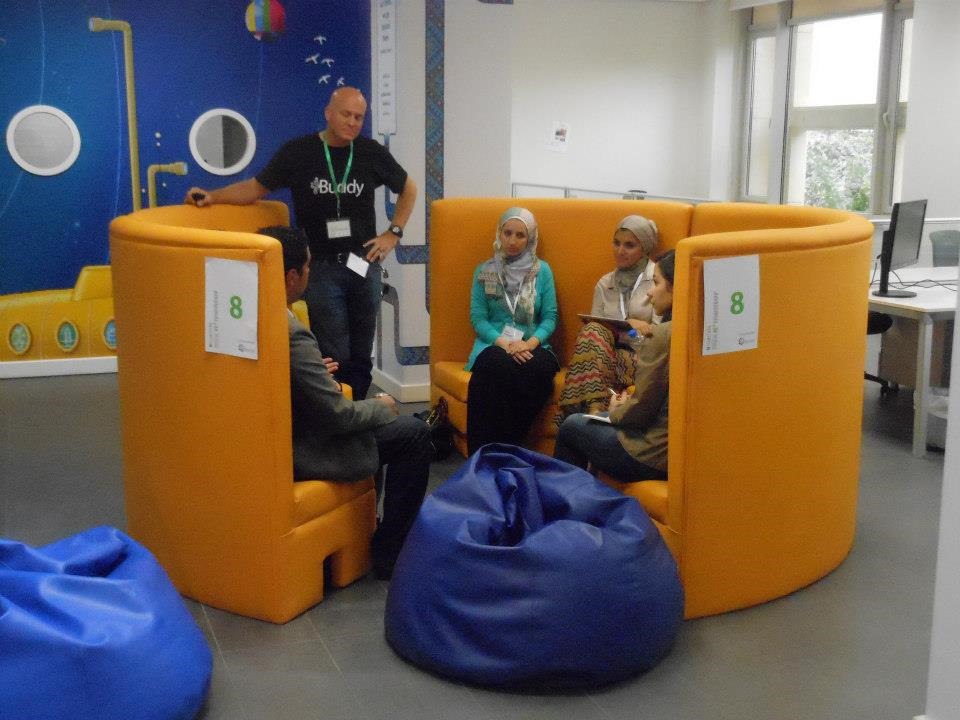 More than half of the startups I met with while there were led by women. I did a talk to a room of about 500 geeks at Amman Tech Tuesdays and there were far more women in the audience than I see a typical Seattle or Bay Area tech events. In my mentoring sessions, where I worked 1:1 with over a dozen different startups, I found the women entrepreneurs to be extremely bright and passionate about what they were doing.

My Western-media-influenced bias, coupled with my previous experience visiting Saudi Arabia, led me to expect lower numbers of women than I saw in the U.S. tech scene. This gave me pause after the first day or so. So I pondered it and started asking questions of both the women and other locals I met. I wanted to understand how this could be, and why it was.

I noticed something else: The men I met actively encouraged women entrepreneurship. For example at dinner one night, I heard several local men brag that one particular female in the group was a leader in her field.

I have a (likely crazy sounding) hypothesis: The men in relatively progressive parts of the Middle East, like Jordan, feel deep guilt about they way women have been treated in the region. They, therefore, are over-indexing to encourage women to succeed.

If I'm even a little bit right about this then watch out world! When (not if) the Middle East becomes the business and technology force it can be, women will be one of its strongest assets!

I believe this so strongly that when I was given the opportunity to talk to the King of Jordan, King Abdullah II, I told him "Keep investing in women entrepreneurs; it will be a differentiator for your country and region compared to the rest of the world if you do." (Our delegation met with the King at the opening of the Oasis 500 startup incubator in Amman).

Arabic is as Important as Geography & Religion to The Arab World

I'm sure some of you reading this will just think I'm an idiot for not realizing how important the Arabic language is to Arabs. Too bad, because I'm now quite certain that I'm not alone in my ignorance. 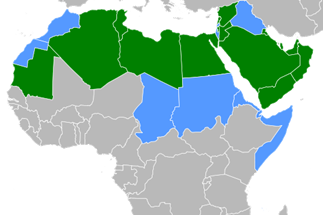 Prior to this trip, even though I'd spent time in other parts of the Middle East, I held a mental model that defined "Arab" and "he Arab world" primarily by geography and religion. To me (and I suspect many of my Western and European friends) the definition of "Arab" stems primarily from the geography centered on the fertile crescent and secondarily from the Islamic religion.

I knew the Arabic language was one of more populous languages spoken in the world, and I assumed there was a degree of "nationalistic pride" associated with it, but I did not realize just how much.

After making many new friends in Jordan, and spending hours picking their brains on the subject, I now realize just how important Arabic is. When asked "What's more important: That your children can speak fluent Arabic or be devout Muslims?", without exception my new friends answered "speak Arabic".

Electronic Payment Systems Will Cause the Real Revolution

This is true in many parts of the developing world, but given the economic buying power of Saudi Arabia, it is clear to me that the low-friction of electronic payments systems will cause an explosion in commerce, capitalism, and economic growth in the Middle East.

The trick is (a) removing the structural barriers caused by old-school economic institutions and (b) overcoming the cultural resistance to using anything other than cash to pay for things.

I learned that banks in Jordan do not allow credit cards to be used for online payments. A bunch of the startups I met with were trying to create new payment systems. Most of the others were focused on ecommerce. However, mobile adoption and broadband Internet access is growing at such a rate there that there's really no physical reason electronic payment systems can be deployed.

The Middle East is a complex system. Jordan is a relatively stable country in a very bad neighborhood. If that stability can continue, the intelligence, optimism, passion, and entrepreneurism I experienced while there will accelerate and, perhaps, things will become slightly less complex. And, perhaps, the neighborhood will improve.

I feel blessed that I was able to meet so many smart, passionate, and driven entrepreneurs in the region. My world-view was significantly altered as a result, and I am grateful for that. I especially want to thank Mickey Bergman, Katherine St. Onge, and Maysam Ali for inviting me on this trip and making it so worthwhile (follow them on twitter!). I did not know what the Aspen Institute did before the trip, but I am now a huge fan. If you ever get a chance to work with Partners for New Beginning, I highly recommend you do.

Partners for New Beginning is a network working in 10 countries where local projects & priorities are identified by local chapters. PNB strategically matches them with U.S. and international partners. 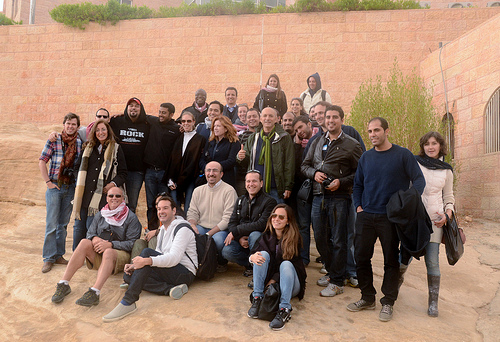 I also want to shout out to all my new friends I met in Amman including the entrepreneurs I have committed to continue to mentor: Sima Najjar of www.ekief.com (think eHow for the Arab world) and Muhannad Taslaq of www.mixeddimensions.com (GameDraw is disrupting 3D content creation for mobile gaming).