LONDON -- The refugee crisis that dominates Europe's TVs and newspapers is the product of the horrendous civil war that still rages in Syria. Why will we not focus our attention on this? The reality in Syria is that the war creates the refugees. Do more to stop this war is my plea. While we focus on our own necessary response to refugees in Hungarian or Austrian railway stations, the humanitarian situation worsens in and around Syria. Refugee camps are struggling to cope. This civil war has to be stopped. Russian President Vladimir Putin hosted meetings on Aug. 25 with King Abdullah of Jordan in Moscow and is also talking to Saudi Arabia. The Security Council in New York should be making a contingency plan for what happens when Assad suddenly leaves Damascus to move to his Alawite coastal stronghold on the Mediterranean.

The U.S. is worried Russia is already putting in sophisticated military equipment to help hold this coastal area of Syria, which has a natural mountain defense barrier. Meanwhile, Putin is resolved to keep his Russian naval base at Tartus, which Russia has had since 1971.

Do more to stop this war is my plea.

The coastal area of Syria may hold the key to ending the war. The people there are getting angry. They are already overwhelmed with refugees from elsewhere in Syria, and their young men are being killed on the battlefield. Village after village is mourning martyrs. Why should they go on dying for Damascus? I believe that Damascus, the capital of Syria, could fall within months. I do not want to be alarmist, but we should prepare for the worst. According to a reliable source in the area I have known for many years, the Islamic State is already in its suburbs at Hajar al-Aswad, about 2.5 miles from the center, and is well-placed but waiting. It is in the outskirts of Homs, too, Syria's third-largest city. ISIS is focusing for the moment on controlling four key elements in the Syrian economy: cotton, wheat, gas and oil. Its priorities are economic strength, consolidating the caliphate and sophisticated publicity. But sooner rather than later Damascus will fall and ISIS will then move into the chaos. It is imperative -- for Russia and Iran as well as America and Europe -- that Damascus is saved. The question is how.

What is desperately needed is a regional mandate under chapter VIII of the UN charter to maintain international peace and stabilize the conflict in and around Damascus: a mandate to administer and defend this multi-faith capital city and provide for a transition over a couple of years to restore a stable state and prepare for democratic, internationally supervised elections. Such a mandate for Damascus cannot be physically or politically run by the UN or NATO, nor by Russia, which supports Assad. It can only come from one country in the region -- Jordan -- with a credible military and administrative capacity that could be supported and backed by regional countries. A mandate with the full international authority of the UN Security Council has a reasonable chance of being successful.

The mandate must provide for and recognize the need for the simultaneous withdrawal of President Assad and his forces to Latakia as Jordan moves into Damascus. Also recognize that Jordan can call on full regional assistance in and around Damascus down to its own border. Also recognize that Jordan must be able to call on military assistance from all five permanent members of the Security Council, whose forces can fly in immediately to defend Jordan's own borders, but with no authority to enter Syria.

Such a mandate for Damascus cannot be physically or politically run by the UN or NATO, nor by Russia, which supports Assad. It can only come from one country in the region -- Jordan.

The cynics will say it is impossible. Jordanians will have great and understandable reservations over becoming embroiled. But who else? King Abdullah has the personal qualities of courage and honor to conduct this dangerous peace mission and to maintain the long-term integrity of Syria. What of Turkey, the other key regional player? Not since Turkey became a NATO member has there been a more important moment for a specific EU initiative to bolster Turkey. An election is due in November of this year, and President Erdoğan's AKP may well once again be deprived of an absolute majority. It would be a tragedy for Turkey, a NATO country and for many years an associate member of the EU, to slip away from both Europe and NATO in 2015 or 2016. Yet this could easily happen.

Realistically, Turkey has to do more to help Syria, but it is facing real problems with its hitherto strong economy. To commit more resources to help Syria it needs EU help with its economy. It does not want to become part of an ever-more integrated eurozone in the EU. That would be to forego its joint destiny of being a Middle Eastern as well as a European country. As long as EU membership carries with it as one of its four freedoms the free movement of people and labor, that will continue to be the unspoken reason for member states stalling Turkey's admission to EU membership.

I believe had we in NATO followed Erdoğan's advice and given clear support in 2011 through training on weapons to the moderate Syrian military opposition, it is possible that the long, tragic, horrendous civil war in that country could have been avoided and Assad removed.

That refusal was the crucial error. The House of Commons in August 2013 was right to reject U.S. retaliation against Assad for using chemical weapons without a Security Council resolution, particularly since immediately afterwards the U.S. Congress backed off and the weapons were removed under UN auspices supported by Russia.

Had we in NATO followed Erdoğan's advice and given clear support in 2011 to the moderate Syrian military opposition, it is possible that the long, tragic, horrendous civil war could have been avoided and Assad removed.

On July 20, a bomb killed over 30 people outside a Kurdish cultural center in a Turkish town, Suruç, on the border with Syria. This terrible incident was followed a few days later by an agreement between Erdoğan and Obama that U.S. planes and drones could fly from İncirlik airfield against ISIS targets in Syria and included a provision for a protected refugee zone inside Syria. It is this protected zone that is the best way to slow today's large refugee movement through Turkey, Greece and up to Germany. Turkey should be offered membership in the European Economic Area with full voting rights, along with the existing three non-EU members of the EEA -- Norway, Iceland and Liechtenstein. Other countries in Europe should be eligible later, like Turkey but without free movement of persons and labor. This would also be linked to any non-eurozone and non-Schengen country not having to offer free movement of people and labor to any incoming EU member state at a future date. Freedom of movement is necessary for an integrated eurozone. It is not necessary for an effective single market in the EEA. Turkey, within such an EEA and as a NATO member, would contribute greatly to improving relations between the Middle East and Europe and to checking, containing and ending the destructive role of ISIS. 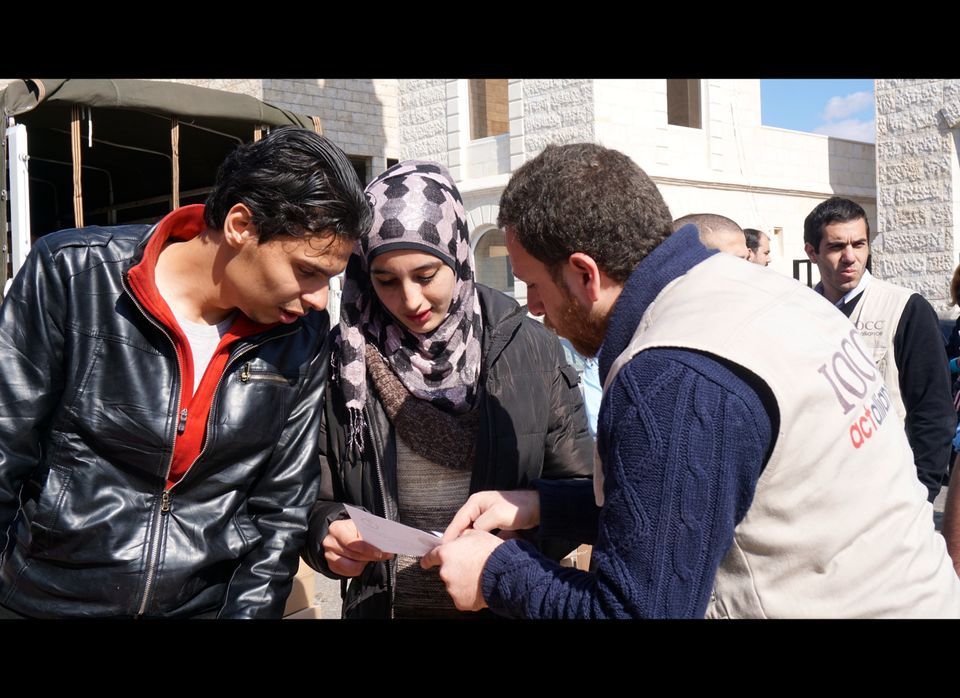 1 / 5
Reviewing What They Received
A staffer from International Orthodox Christian Charities (right) reviews the relief items that Duha (center) and her husband received at an aid distribution just outside of Madaba, Jordan. (Photo: Loren Hyatt for Lutheran World Relief)