During its larval stage, the moth Calindoea trifascialis crawls the dry forest floors of southern Vietnam amongst elephants and flying insects, spending most of its time chewing away at a protective, tent-like structure it makes out of leaf parts.

Eventually, when the caterpillar prepares to pupate and metamorphose into a moth, it rolls itself into a new type of protective leaf structure the thickness of a pinky finger, and then quivers itself onto the forest floor. It proceeds to hop around the forest floor within its leaf-roll for up to three days, directing itself away from sunlight.

Researchers with the University of Toronto and the Royal Ontario Museum discovered this behavior by chance during an undergraduate field course in Yok Don National Park in southern Vietnam. The finding surprised the researchers, as only a few other caterpillar species are known to hop, none within this type of leaf structure. The team reports their finding today (Aug. 20) in the journal Biology Letters. [Caterpillars Morph into Butterflies in Amazing 3D Images]

"The mechanics of it are pretty remarkable," said Chris Darling, a biologist at the University of Toronto and an author of the paper, pointing out that the caterpillar's movement resembles trying to hop inside a sleeping bag.

The team did not initially realize that the caterpillars were able to hop after collecting them from the forest floor. Instead, the researchers were simply interested in studying the caterpillars' rolled structures, which they called "retreats". The team stored several of these so-called caterpillar "retreaters" underneath their beds for further analysis, awaking later to the sound of rustling.

"We heard them in the middle of the night and wondered if it was a rat," said Darling. "Lo and behold, it was the retreaters running around in the petri dish."

The researchers collected more of these retreaters to try to figure out the purpose behind the behavior, and filmed 16 of them to observe the activity in detail. The scientists found that the caterpillars tended to direct themselves away from the sunlight, presumably to avoid drying up under the hot sun.

To determine how the caterpillars managed these impressive hops, the team created transparent, artificial retreats out of cellophane plastic, placed caterpillars inside and then sealed the containers shut to simulate a natural retreat.

The caterpillars took to the synthetic retreats as if they were their own, spinning silken mats on either end. The team, easily able to see through the clear structure, observed the caterpillars using the silken mats as springboards for their jumps, hooking their prolegs — protrusions that are not truly legs — to the mats, and then propelling themselves across to the other side of the retreat like a piston.

By laying mats on both sides of the retreat, the caterpillars were able to switch directions and maintain more control over their final resting places, where they would sit for up to 12 days until they emerged as moths. [Watch a Video of the Caterpillar Hopping] 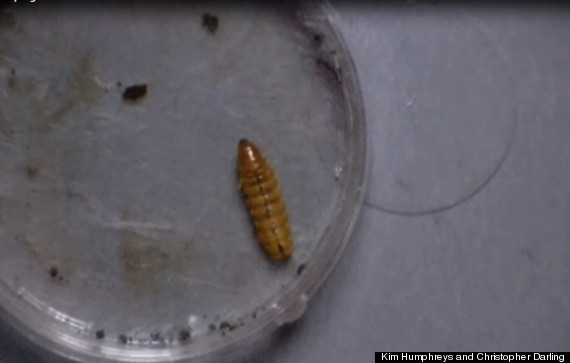 Calindoea trifascialis is one of the few caterpillars known to jump.

David Wagner, a professor of ecology and evolutionary biology at the University of Connecticut, has studied more than 2,000 species of caterpillars, and has only seen jumping like this that occurs inside structures in the Mexican jumping bean – larval moths that inhabit seed pods before pupation and jump to avoid sunlight. He said that other researchers had likely overlooked the new behavior because the hoppers probably become hidden within the leaf litter, making them difficult to find.

"To the best of my knowledge, this is new and novel, and extremely interesting," said Wagner. "It's a fascinating nugget of natural history."

Wagner suggested an alternative explanation for the behavior, that the caterpillars are seeking dark spaces to avoid predators, possibly in addition to avoiding desiccation in the sun.

"It doesn't have to be an either-or. The two can go together," said Wagner.

The research group hopes to next investigate the broader evolutionary context of this unique adaptation, and plans to look for similar but perhaps less developed behaviors in other species.

"It's a little odd to see something as elaborate as this [that is also] fully functional," Darling said. "There are probably intermediate stages along the way, and it would be nice to know what those were."