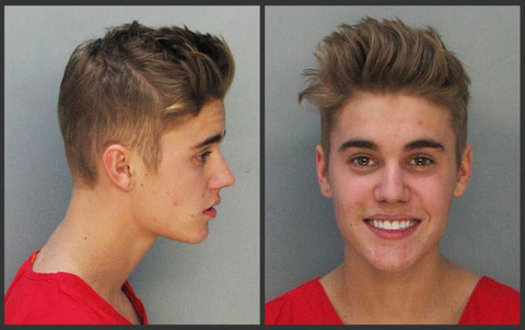 Judging by the journalism PR site, MuckRack, one of the most popular news posts this weekend was a piece by the NYT Bits Blog trumpeting the demise of Twitter. Lamenting "the good old days," the author, Jenna Wortham, now declares the service hopelessly petty and narcissistically obsessed.

Her case in point was the attention paid to the Justin Beiber mug shots released end-of-week by the Miami Dade Police. (As several of Bits' commenters point out, however, the story and the imagery liked loomed that prominent to two Twitter demographics: pop culture fans and click-hungry, major media quasi-news blogs engaged in their own attention seeking.)

It's not just that Ms. Wortham commits the journalistic sin of dismissing the Twitterverse with one broad brush. (The fact Twitter continues to spawn increasingly cellular and lively ecosystems -- the photojournalism community representing just one example -- makes Ms. Wortham sound that much more ignorant.) Her missive is just the blather, in fact, that any adept Twitter user, either through ignoring or intimately unfollowing, can simply bypass. On the other hand, hers is a brilliant post if the definition of accomplishment is achieving widespread buzz while pimping out Bieber -- not just the mug shots, but also a follow up shot of the actor being released -- as simply random case study material for a generic Twitter rant. 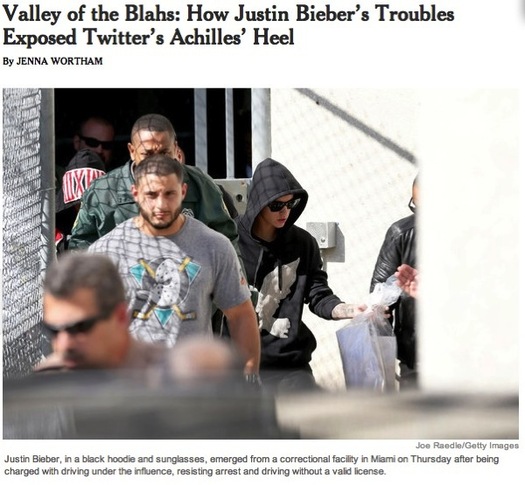 (An honorable mention is also due, by the way, for alluding, with bald self-effacement, to
Advertisement
the prodigious number of Twitter followers you have
... which, in round digits, would be 506,000.)

In this case, the most redeeming element about the post are the comments -- once you filter out the non-Twitter users. That's because, interspersed in the articulate rebuttals to the attack, you have readers who, amazingly, want to deal with the photos. Of course, there are those who call out Bits for using the photos as bait:

YYL Florida
Is this a news story about Bieber, or about that handsome hunk in front of him to be starring in the next Riddick sequel?

Dan Jersey City
Has "Bits" descended the same way? What do the mugshot and other photograph of Mr. Bieber contribute to this article?

Thankfully, there is also this, tackling, in two sentences, both the politics of the photos and the content itself:

Taylor San Antonio
I appreciate all the comments made here about Twitter, but I'd like to know why Bieber was being allowed to smile in his mug shot. I thought that wasn't allowed. Or was he given a pass because he's a celeb?

Props to Taylor from San Antonio for redeeming the entire exercise. Rather then the media universe feasting on this fluff as fluff (or fluff as social media demise), what does it mean that the police force, too, enabled that smiley face? As a civil defense assist to TMZ, doesn't this further illustrate the division in the country between the rich and famous versus the poor and common? If we are really going to "appreciate" these Justin Bieber photos, then perhaps they should be read alongside this Salon post about the S.F. Google buses and America operating on two legal tracks. It's that split, immediately evident in this quirky booking photo but somehow oblivious to Bits, that led another commenter in that comment thread to simply believe it's...