Best-selling author Kathy Freston's new book, Veganist: Lose Weight, Get Healthy, Change the World, was #1 on Amazon for most of last week. It details the tremendous physical and environmental benefits of a vegan diet in shocking but ultimately affirming terms. During her visit to the Oprah Show to lead the Harpo Vegan Challenge, she took some time to talk about these remarkable benefits.

But it's not just Kathy. In its new Dietary Guidelines, the USDA talks up vegetables: "Vegetarian-style eating patterns have been associated with improved health outcomes, lower levels of obesity, reduce risk of cardiovascular disease and lower mortality." I thought it would be a great time to check in with Kathy about what this means for the American diet.

Chris Elam: Congratulations Kathy, your book is already a huge seller -- these issues have come a long way!

Kathy Freston: It's just so exciting. People are no longer satisfied with the status quo. They're eating consciously more and more. They're curious -- they want to know how the workers were treated, what the animals went through, how the environment is being effected. 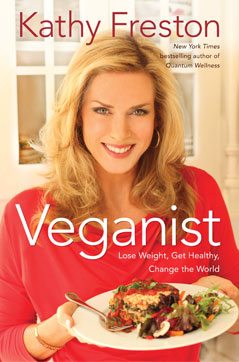 CE: Your new book is titled "Veganist" -- that's a new word for me.

KF: My husband actually came up with it. He called me a veganist one day! The suffix -ist means "one who does" or "one who studies." I'm someone who wants to know everything about being vegan, all the implications of my food choices.

With this book, I didn't want to skirt the V-word. Some people connect it with an old, fringe movement. But I think it's so fresh, and so dynamic. The young generation is embracing the word. They're seeing the undercover accounts of animal treatment, learning about greenhouse emissions, and the chronic diseases related to diet. I just wanted to be out with it.

CE: In your book, you speak with experts in various fields to analyze the health, environmental, spiritual and cultural implications of a plant-based diet. We could do an entire interview on each of these topics. Let's start with addiction -- or the health benefits.

KF: When you're eating fast food, you're getting A LOT of fat, sugar and salt. First off, that's just "salting" your senses. Anything less than those strong flavors is going to taste less than. It's very hard to please your taste buds if that's where you are.

Secondly, the saturated fats in meat stimulate your pleasure center in your brain. You just want more and more of these fats. Also, during the digestive process when you're eating dairy, the body produces "casomorphins." The word "morphine" is there for a reason. Which is why people have a much harder time giving up their cheese than other animal products.

CE: Which of course is one of the drivers of the obesity epidemic we face as a nation -- and as a world. What can people do?

KF: Cut back, for one. But it doesn't have to be all or nothing. It's about leaning into a vegan lifestyle. To make any great change, it's SO much easier and sustainable to lean into it. To gradually nudge yourself in the direction where you want to go. You get to find your way without the pressure of changing everything overnight.

For me, when I realized I wanted to stop eating animal products, I was seized with this question: Oh my God, what do I eat? I knew myself, that I'd fall into my old bad habits if I tried to do everything at once.

I couldn't have done the leap straight to brown rice and lentils and veggies. Even now I don't want to eat like that every day: I have traditional foods that I enjoy: like burgers and pizza and chicken with mashed potatoes. Veggie-meats, or meat substitutes, are great for me. They're a fantastic bridge to eating a completely whole foods vegan diet.

Going back to the idea of addiction...you have to give yourself that period of adjustment. You can't snap your fingers and say: OK I'm totally satisfied with these tastes I'm not used to. When you're moving away from anything you're habituated to...you're going to miss it. But after a period of adjustment, you'll prefer that healthier, lighter food.

CE: I bet everyone asks you about protein -- it's what they ask me.

KF: Yeah, it's the #1 question for sure. People really don't have any idea, even very smart people. There's protein in whole grains, beans, legumes, nuts -- you can make delicious black been burritos, lentil soups, chickpea curries. Anything you're used to having, you can pretty much have a vegan version of it.

CE: Tell us a little about the phenomenon of disease reversal that you explore in your book.

KF: Substantial peer reviewed studies indicate that some cancers are not only halted but can be reversed by a plant-based diet. That's very exciting. But even more accepted is the fact that heart disease can be halted and reversed by a vegan diet. And type 2 diabetes can be reversed in a matter of weeks. You can get off your medication, under a doctor's supervision of course.

Weight begins to drop after just 1 week on a vegan diet. Your thermogenic levels go up after 3 weeks, which means you're getting a 16% higher calorie burn after eating a vegan versus a meat-based diet. Plus of course you're getting the fiber -- so you won't feel the need to overeat. Plus there's no saturated fat in vegetables. There are just so many health benefits to a veggie-based diet.

CE: Do you consider the environmental effects?

KF: Absolutely. It's a complex issue, but to put it briefly: raising animals for food is the primary cause of: land degradation, air pollution, water shortage and climate change. If we care about the planet, then eating vegan is an excellent step we can all take.

CE: Tell us what was the most shocking thing you learned in researching this book?

KF: I'd have to say what's happening to animals every single second. 10 billion animals are killed every year in the U.S. And 60 billion worldwide. Although the industry says it's moving towards more humane practices, 9 of 10 animals killed are birds. They don't have humane slaughterhouses. They're crammed in cages, live in near darkness, pumped with antibiotics. I just think it's shocking. So many of us simply don't know the truth.

Eating a vegan diet is the most direct way we can put into practice values like kindness, compassion and mercy. When we eat consciously, we're automatically following those values.

CE: We could all use a little more of these values.

KF: That's the point. If we can't get the little things right, like what we serve in our kitchens to our families, how can we get the big things right like say stopping wars? If we want to move forward culturally, and globally, and to have a more benevolent world, the easiest place to start is on the plate.

CE: Do you think we're making progress? On one hand, farmers markets are thriving, so are CSAs, and people are increasingly choosing plant-based options. But on the other hand, Congress is deregulating genetically engineered crops left and right and also threatening to defund the food safety bill.

KF: I think there's a perfect storm of forces pushing us forward. The animal protection agencies are doing undercover investigations. The UN scientists are doing their reports. There's a growing sense that the government and big companies aren't looking out for us -- that we have to take our health and wellbeing into our own hands.

I truly believe the culture always leans towards doing the right thing. We're slow as human beings, but we do get there.

Ultimately, everything is driven by the market. When there's demand for delicious, healthy plant-based foods, then companies will deliver. The more people speak up, the more business owners will provide. Ask on a plane is there a vegan option, or at coffeeshop is there soy milk, or parents should ask about healthy vegan options at school. The more they provide, the more delicious it'll be. And the easier it'll be for people on the fence. It's all about making those requests kindly, without attitude, and appreciating that everybody's finding their way.

CE: You're basically talking about a cultural shift. Are there institutional entities trying to change policy?

KF: Sure. The Physicians Committee for Responsible Medicine, led by Dr. Neal Barnard, is challenging the USDA dietary guidelines. That's very exciting. The Humane Society is litigating state by state regarding treatment of animals.

By changing legislation, along with a cultural shift -- people really asking for vegan options -- will make a profound shift. We need both!