How many times a day do you handle or see money? It is a form of media that everyone is exposed to, but the vast majority of people don't think about. And yet, our paper currency is one of the most subtle ways we teach kids to ignore and overlook the absence of women as public figures and people whose contributions to society matter. Money, by featuring only men, and only white men at that, helps boys and men accrue cultural capital, an uncomfortable, but very obvious truth of so much of our media. Boys and girls, know it, it's the adults around them that seem to have a problem.

Women on 20s, or W20, organized and launched this month by Barbara Ortiz Howard and Susan Ades Stone, is making a fantastic effort to change this. The organization plans to petition the White House to change the face of the $20 bill by 2020, the 100th anniversary of the ratification of the 19th amendment. The Treasury Secretary and the President, without an act of Congress, have the ability to do this.

W20 is asking for people to go to their website and vote on a list of 15 candidates to replace Andrew Jackson on the $20 bill. The list of candidates includes Eleanor Roosevelt‎, Rosa Parks‎, Susan B. Anthony,‎ Shirley Chisholm‎, Sojourner Truth,‎ Frances Perkins‎, Betty Friedan‎, Rachel Carson,‎ Clara Barton,‎ Alice Paul‎, Elizabeth Cady Stanton,‎ Patsy Mink,‎ Harriet Tubman, and Margaret Sanger. It is a diverse list, primarily criticized on the organization's Facebook page for the lack of Native American women and the inclusion of Margaret Sanger, whose transformative social justice movement has long been marred by eugenics controversy.

Other critics bring up the number of women beaten and raped or subject to acid attacks, saying feminists have their priorities wrong and should focus on more important issues. "The next time somebody talks about 'misogyny in American society,' forward them this," blah blah blah. Or, women haven't, historically, done anything worth noting. There aren't enough dead accomplished women. Besides, Anthony was already on the dollar coin, replaced by another woman, Sacagawea, but no one used the coin (because a woman was on it?) How much do you women want? Lastly, it costs money to change money, and this is a stupid waste of time and funds. Did I miss anything? Oh, yes, if women want to be on our money, they should be president first.

Yes, women are being violently oppressed and feminists are focused on these issues as well. As in, holding multiple ideas in our heads at the same time, dividing and conquering different issues and forming alliances across difference. In general, anti-feminists telling feminists how to be feminists is a piss poor way to engage in a constructive conversation, which is, of course, not everyone's goal. Media equity like this is critically important to shaping attitudes that contribute to violence against women. This response, and the fact that this campaign is a thing at all is, as feminist campaigner Caroline Criado Perez, who undertook a similar initiative in the UK in 2013, put it, "more an indication of the level of sexism still prevalent in society" than feminist priorities.

The same is true of political ambition, which is informed by cultural ideas and stereotypes about who is worthy of trust, authority and hero-worship. Many objections are based on the error, deliberate or not, of thinking that media erasure, tolerance for gender-based violence and political ambition are unrelated.

"You can't be what you can't see," isn't just an empty platitude. Visible currency is part of daily life. Children see it, use it, need it, play with it, earn it, save it, spend it, worry about it and hear adults talk about it. The erasure of women from this media is one of the ways that we cultivate visual gender biases that make it possible for the absence of women in the public sphere to be "normal." People routinely see balance where none exists and think nothing of the near complete absence of women in key areas of the public sphere.

Just because our culture's education system fails us, generation after generation, doesn't mean women haven't always managed to overcome impediments to achieve great things, it just means our cultural influencers ignore women's accomplishments. It's a power play, pure and simple. We generally don't teach children about women, acknowledge the relevance of their labor or give them public recognition. LIKE ON OUR CURRENCY. This is hardly hardly exceptional, however.

And then people ask what girls can do to be more confident and overcome their personal insecurities (#30).

Money, like statues, holidays and postage stamps, is a form of public media that speaks particularly to what we, as a culture, think is important to note and admire. As is the case with most media, women and their contributions remain either hugely underrepresented or, in the case of paper money, totally erased. People can talk until they are blue in the face about equality for women, but it rings hollow until women's accomplishments are valued and recognized.

Studies show how important visible role models are to girls. But they are also important to boys, who are never expected, to our collective detriment, to cross-gender empathize. Boys in particular need to see women recognized for their public contributions, contributions that have nothing to do with homes, sex, reproduction, nurturing and motherhood. The last time our currency was revamped was 1929, when women weren't only not featured on money, but could not even hold bank account or credit cards without a husband's permission, something that did not happen until the1960s.

As boys and girls age, boys' sense of themselves, their abilities, their ambitions, agency and potential expands. The opposite is true for girls. The peak age for girls' political ambition in this country is NINE. Let that sink in for a while. That means that after that girls' ability to see themselves as powerful, as leaders, as people who are respected and admired by our culture, begins to decline. By the time they are college-aged, a gender gap exists in confidence, political ambition and wages, frequently tied to the belief that we aren't worth enough to ask for more.

While I appreciate the W20 effort enormously, I have no idea why we are pushing for only one bill. An accomplished female face on the $20 will be great, but why stop there? W20 asks, "It's time we put a woman's face on our currency, but who?" And I am forced to ask, "Why do women always have to fight for one slot in a field of men?" 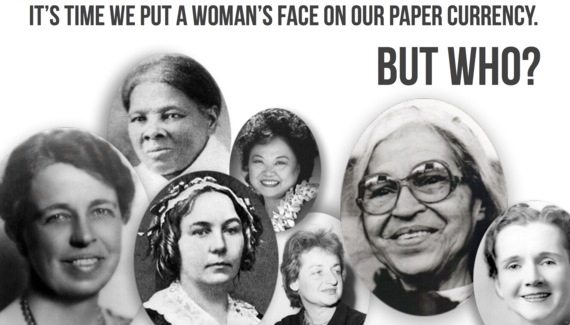 This is Smurfette Principle 101, and should make people pause to think about what any and all of this teaches all children. This campaign is important and I really hope it is successful, but the basic framework here is that we are, in voting, pitting these fantastic women, all whose accomplishments have been shamefully under-appreciated by our society, against one another in distasteful competition for what men will "give" them. Cynical, yes. But also an a statement of fact, given the gender demographics of decision making.

That a man, all of whom are currently white, would be displaced by a woman, is seen by many as a fundamental threat. Mainstream news sources covering the W20 campaign have been mentioning Criado Perez's success. Initially, her proposal was met with official disdain, but 35,000 signatures later, the Bank of England to said yes to Austen. However, media have not touched on the ugly backlash that resulted. For her efforts, Criado Perez was subjected to a relentless barrage of rape and death threats online. People sent messages such as, "f*** off and die you worthless piece of crap," "rape her nice ass," "go kill yourself," "rape is the last of your worries." At one point she was receiving 50-plus abusive and violent tweets an hour. Other prominent supporters of the cause were similarly threatened with graphic and violent messages. Two people were eventually sentenced to jail, although not for sending threats, but on charges of offensiveness. ("Threats" does not begin to describe what this abuse entailed.)

We should have gender parity in our media, and more diverse and diversely accomplished people on our paper currency, before it's entirely obsolete. As W20 points out, while a man like Andrew Jackson is a revered figure in American history, he was also uninterested in paper currency, a slaveholder and responsible for the Indian Removal Act of 1830. What if, for the first time, we actually memorialized a person who fought slavery instead? Egads.

"This group wants to banish Andrew Jackson from the $20 bill," the headline used by The Washington Post last week, is exactly the kind of negative, unhelpful and implicitly antagonistic framing that curries conservative anti-feminist backlash, a sadly inevitable reality.

"There are always going to be angry people I suppose," says Ortiz Howard. "We are fortunate to be receiving overwhelming support. People want to volunteer and do campaigns at their schools and such. This is a campaign that we will keep to honor women and their accomplishments. There is a learning curve for the public, too, which was part of our idea."

Ortiz Howard is more patient than I am, generally a good thing. It is beyond absurd that we are spending so much time and effort fighting for the inclusion of women in public space, and having to explain why it matters. This is a collective failure and an unethical one to boot. We should be, as a society, asking why we continue to ignore women's historical contributions or the well-understood damage that failing to acknowledge those contributions is doing. Girls and boys both need to see women as part of our public imagination. Support W20's efforts, vote and show your children so they can vote, too.

"I like the quote from the Republican congressman a few years ago who introduced legislation to put Ronald Reagan on the $50 bill, replacing Ulysses S. Grant,' says Ades Stone, W20s Executive Director, "He said, "Every generation deserves it's own heroes." I think that's fitting to think about in 2015. Attitudes change. This country has changed. Time for change."