Lady Gaga is a shining example of resilience in an unforgiving pop music world, and in an age where second chances can be hard to come by, the 30-year-old singer is proving she's as ready as ever to make her mark in 2017.

Although unofficially confirmed, Gaga is said to be the headlining act at the Super Bowl Halftime Show next February, and the details of her forthcoming debut, Joanne, on October 21 are promising a brand new version of the performer. Joanne will feature some of the most respected names in music, including Beck, Father John Misty, Mark Ronson, Tame Impala's Kevin Parker, Bloodpop, Florence Welch, Josh Homme, and country songwriter Hillary Lindsey. Her newly-released single from the record "Perfect Illusion" debuted at the No. 15 spot on the Billboard Hot 100, and became the 23rd Hot 100 entry of her career.

If history complies, it's likely that a world tour will follow the release of Joanne, and tickets for the tour may be some of the most in-demand of her career thus far. Gaga's most recent solo headliner, ArtRave: The Artpop Ball in 2014 showed the biggest drop in resale ticket demand since the singer started touring, and registered the lowest gross ticket revenue as well. The tour grossed just $83 million, a meager number compared to her other powerhouse runs. Resale tickets for ArtRave averaged just $171 across all of her dates, marking a 50.4% decrease in average from her The Monster Ball Tour in 2011, which grossed a massive $227.4 million in revenue. While the Born This Way Ball in 2013 posted solid resale ticket averages of $215, over 20 dates of the tour were cancelled due to Gaga's hip injury. Regardless of the cancellations, The Born This Way Ball took in $186.82 million. To date, "Monster Ball" remains the singer's most competitive stretch on the road, and resale ticket prices (as well as overall gross), have simply declined over the years. But for music fans and ticket buyers, there's good reason to believe that her next tour will be her strongest yet. 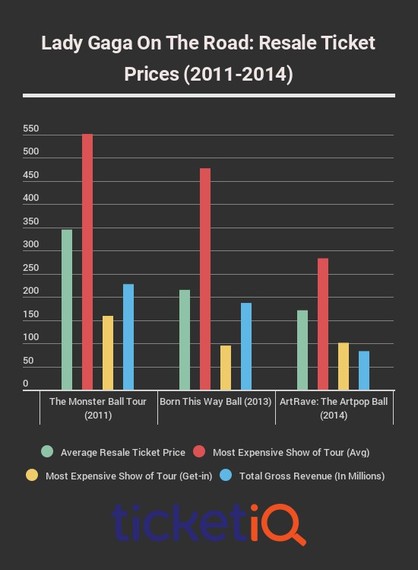 Although the Lady Gaga we see in 2016 is vastly different from the meat dress-wearing pop star we saw six years ago, the new era of Lady Gaga will come with years of reflection and rebuilding. Gaga's rapid rise to the top was fueled by the unusual stage antics that came to define her, as well as the unique brilliance behind hits like "Bad Romance," "Paparazzi," "Born This Way," and "Applause." But her success came to a threatening end in 2013 when the release of her third studio album, Artpop, failed to meet the expectations of those who once heralded her an artistic hero. For many, the Gaga ship had sailed, with her brief yet powerful career fading from a spotlight that she would likely never reclaim.

In the years that followed the darkness of Artpop, Gaga searched for the light. The singer found a kindred spirit in the great Tony Bennett, whom she joined forces with to record the 2014 jazz standards album, Cheek to Cheek. The album, as well as the live tour that followed it, showcased a stripped-down version of Lady Gaga and provided a platform for the distinguished talent that had been overlooked by the eccentricity of her act.

In early 2015, the singer performed a stunning tribute to The Sound of Music at the 87th Academy Awards, where she sang a medley of songs from the film's soundtrack. The performance was considered one of her best by Billboard, and triggered over 214,000 interactions per minute globally on Facebook. Later that year she released the powerful song, "Til It Happens to You," which she played live at the 2015 Billboard Women in Music, Producers Guild of America Awards 2015, and the 88th Academy Awards. Gaga kicked off 2016 by singing the National Anthem at Super Bowl 50, and at the 58th Annual Grammy Awards, performed a tribute to the late David Bowie. Along the way, she has performed countless tributes to the greatest musicians in the world including Carole King, Stevie Wonder, and Sting. This 2016, she became the first person to perform at the Super Bowl, the Grammys, and the Oscars all in the same year.

Although Lady Gaga's popularity has declined in a fiscal sense, it's hard to put a price on maturity and respect, and Joanne is likely to push the singer into a new era of just that.