With the 2016 election, we have a rare opportunity to break the chokehold the neo-liberal agenda has maintained for nearly half a century on the political, economic, and social life of this nation.

What that requires is to end the crushing cynicism and settling for business as usual, establishment politics by electing Bernie Sanders and building the movement we need to transform the country. 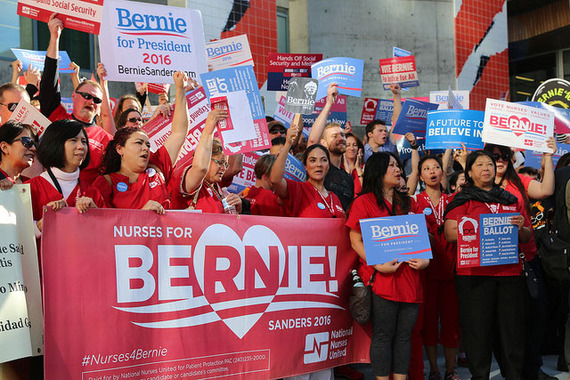 For too many liberals, the far right obstructionists in Congress and state governments have served as a crutch for resignation and lowering our expectations. It's time to recognize the problem is not just the right.

In his important new book "Listen Liberal," Thomas Frank aptly describes the steady shift of the Democratic Party away from the working class who were once its roots to becoming a champion of Wall Street and Silicon Valley technocrats.

It's an inconvenient truth that many of the policies that produced a massive transfer of wealth to the 1 percent, decades of wage stagnation, and the "you're on your own" society started not with Ronald Reagan, but with his predecessor, a Democrat, Jimmy Carter.

It took the Presidency of Bill Clinton to bring this new world order to full fruition, Frank notes.

From the shredding of manufacturing jobs with NAFTA to Clinton's crime bill; to the gutting of the welfare social net that left millions in extreme poverty; to banking, electricity and telecom deregulation, Clinton cemented the Democratic Party alignment with Wall Street and global capital.

Today millions of American workers and families continue to struggle in an economy tilted to the wealthy and the elite and a political system corrupted by corporate donors and billionaires.

While electing Hillary Clinton would be a symbolic first, nothing in her record, or her campaign, suggests Clinton would break the class ceiling or reverse the marriage of the Democratic Party with Wall Street and K Street. 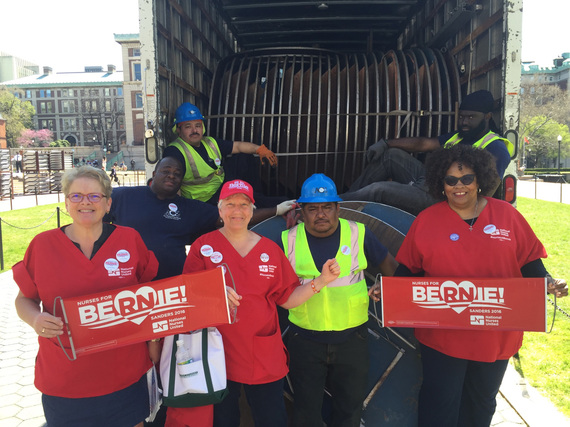 Indeed, much of her campaign is a reminder of the "triangulation" that so characterized the Bill Clinton years. To cite just a few examples:

• Hillary Clinton attacks the premise of single payer and insists we can't "refight" healthcare, promising only to tweak the gaping holes in the Affordable Care Act. 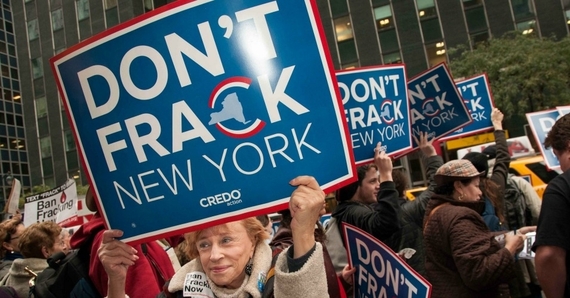 • Rather than banning fracking, as Sanders urges, she proposes "safeguards" that rely on companies to disclose the deadly chemicals they use. That would do little to reduce the emissions that jeopardize public health and accelerate the climate crisis.

• She insists her plan for Wall Street is "tougher" than Sanders' while seeing no conflict in funding she has received from the financial services industry for years. She reassures us that she supposedly counseled the bankers to cut it out before the meltdown while continuing to hide transcripts of speeches to Goldman Sachs, for which she was paid $675,000, that one attendee says were "glowing about us."

• In the area of experience she most touts, foreign policy, her fondness for regime change, as evidenced in Libya, which President Obama now calls his "worst mistake"), her implicit support of a disastrous coup in Honduras, and embrace of Henry Kissinger, hardly offer comfort.

Fortunately, we have an alternative. Bernie Sanders campaign, and the movement aligned with it, is the most significant effort to uproot that neo-liberal agenda in decades (with a nod to Rev. Jesse Jackson who, like Sanders, was demonized by both the corporate media and the party establishment). 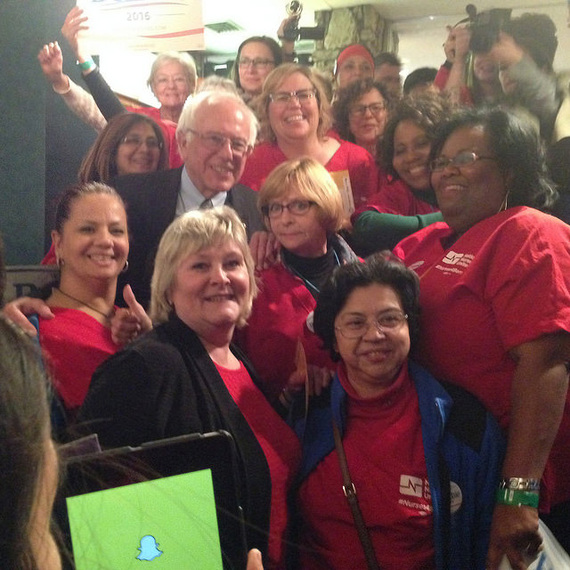 Our members have traveled across the country, talking to the ordinary Americans left behind by the "recovery" and discussing why his campaign represents such a fundamental break with the status quo.

Why? Sanders is campaigning to redress the issues that have animated nurses for years. Among them - an improved Medicare for all, aggressive action to reverse the harmful impacts of climate change, reversing the grotesque income inequality that keeps far too many trapped in a cycle of poverty, poor housing, food insecurity, fear of retiring in poverty, and taxing Wall Street speculation to pay for the basic needs we need.

For nurses, it begins with a basic dedication to their patients. Everyone is entitled to quality care, no matter their ability to pay, gender, race, age, sexual orientation, where they live or where they were born.

As the organized voice of nurses, NNU extends that advocacy and that humanitarian imperative to the public arena. Starting with healthcare. 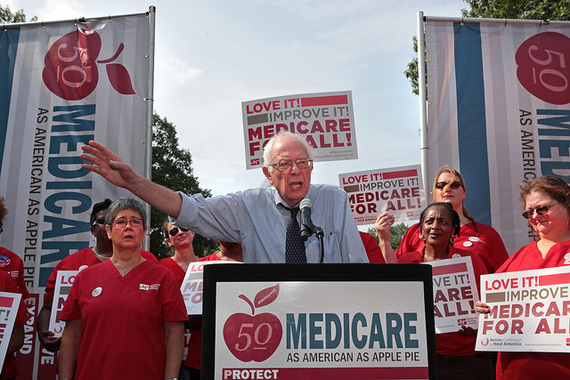 While the Affordable Care Act did interrupt some of the most egregious insurance abuses, you are still not "insured" if you have to forgo chemotherapy or referral to a specialist because of the high out-of-pocket cost, or choose that painful decision between getting the care you need or paying your rent or utility bill.

One fifth of people "with" insurance have difficulty paying their medical bills, the New York Times reported in January. Of those two-thirds said they has used up most or all of their savings.

Is it truly "pie in the sky" as Hillary Clinton insists to continue to fight for guaranteed healthcare for all, as is standard in most of the rest of the world? Or can we join with Bernie Sanders is insisting that health care is a right and we must not stop until we have an improved Medicare for all.

That commitment to real healthcare reform symbolizes Sanders approach across the board. It means:

• Advocating for free tuition at public colleges and universities so that everyone has the opportunity for higher education. 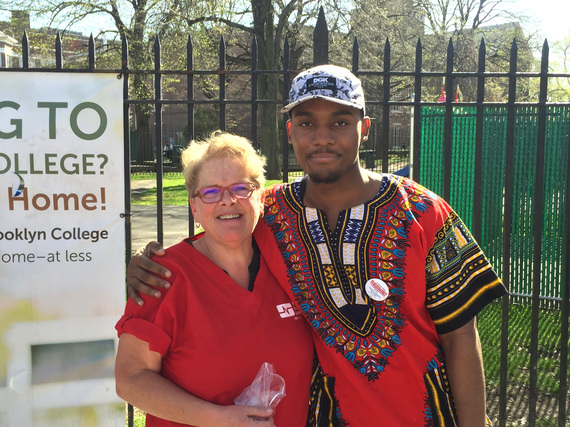 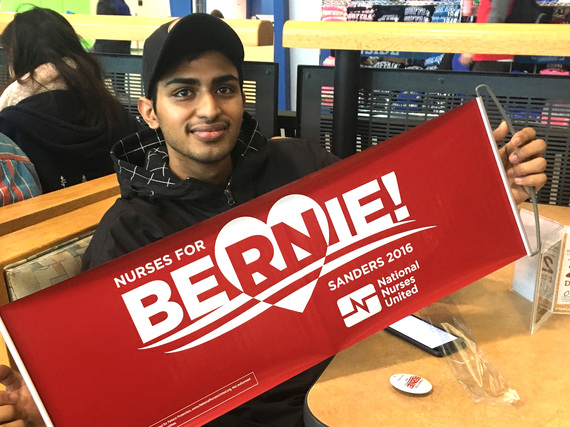 • Leading the effort to expand Social Security, not cut it in some "grand bargain" with those who will never be satisfied with funding programs that help people.

• Opposing the Trans Pacific Partnership pact, which will outsource more American jobs and protect pharmaceutical profits with inflated prescription drug prices. It does not mean suddenly deciding you oppose a pact you helped negotiate and branded the "gold standard" in trade.

• Championing a tax on Wall Street speculation which would raise $300 billion a year to pay for the college plan, as well as health care, affordable housing, job creation, climate action, and other basic needs. 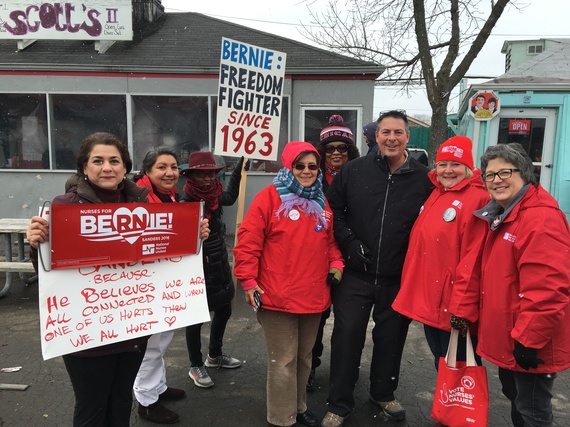 • Proposing concrete, comprehensive plans for meaningful criminal justice and immigration reform, not just based on rhetoric but buttressed by a lifetime record of fighting for justice for all. 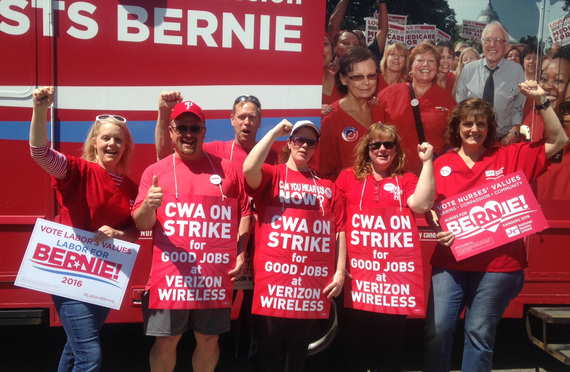 Nurses on the picket line with Verizon workers, Wilkes-Barre, Pa

• Reinforcing the most pro-union record of any leading Democratic candidate for President, probably ever, a man more at home on picket lines than in the homes of millionaire donors at swanky fundraisers.

• Laying out a grand vision, for our children, for the hope that they can have a better life than their parents, not be frozen in low paying jobs or limited opportunities while more and more wealth is gobbled up by those at the top. And while the supposed party of the people caters to the entrepreneurs in Silicon Valley, the pioneers of a low wage, non-union "gig economy" and the wolves of Wall Street. 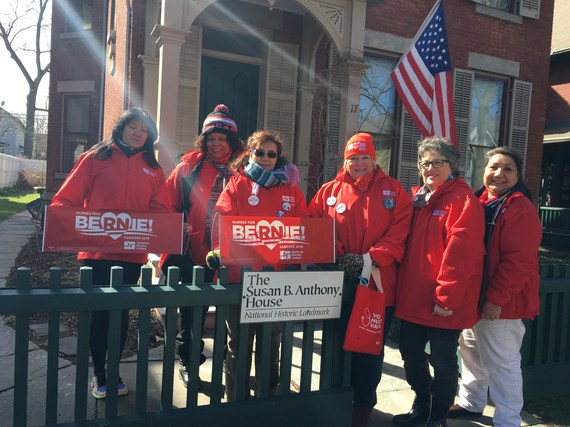 NNU members at the Susan B. Anthony house in Seneca Falls, NY

And it means embracing a "political revolution," understanding that is how real change has ever occurred in the U.S., from abolition of slavery to women's suffrage, to union rights, to ending Jim Crow segregation to marriage equality.

Many progressives intrinsically know that Bernie Sanders is the best choice for achieving the fundamental change we so desperately need.

But they get mired in the ocean of ink from a corporate media that writer-educator Robert McChesney calls Hillary Clinton's "true firewall" whose sole purpose is to derail a campaign and movement that represents a significant threat to their class interests.

Don't be misled, discouraged or demobilized. The race can still be won.

Many states with hundreds of pledged delegates have yet to vote, and super delegates can as late as the Democratic convention change their support to the candidate they think will win in November.

There are lots of reasons why that candidate is Sanders.

His momentum from trailing Clinton by 60 to 70 percent a year ago has morphed into a tie or lead in national polls, despite her advantages of better name recognition, a deep war chest filled by her non-stop fundraisers, manipulation by the Democratic Party machinery, and the fawning of the mainstream media.

But Bernie's rise and momentum is a herald of the possible.

While Clinton struggles with the highest unfavorable ratings of any candidate in recent memory not named Trump or Cruz, Sanders has among the best ratings for honesty and trust, based on a life of consistent, principled values.

Rally for Sanders in Binghamton, NY

Through years of being re-elected over and over in Vermont, to his growing national support, Sanders has shown a rare ability to attract Reagan Democrats and independent voters, as well as generating the enthusiasm of young voters.

Nearly all of those who have voted for Clinton would likely support Sanders in November. By contrast, there is real doubt that the base now voting for Sanders would carry over to a politician, Clinton, many of them do not trust.

It is for those reasons as well as the widespread disgust with a corrupted political and economic system, that Sanders polls better in virtually every comparison poll with the three remaining Republicans than does Clinton.

Those who worry that Sanders will be red-baited in a general election forget that the Clinton campaign and their surrogates have already played that card, and that it hasn't worked against someone who has long described himself as a democratic socialist.

Who is the more electable candidate? The guy who is rising in the polls. 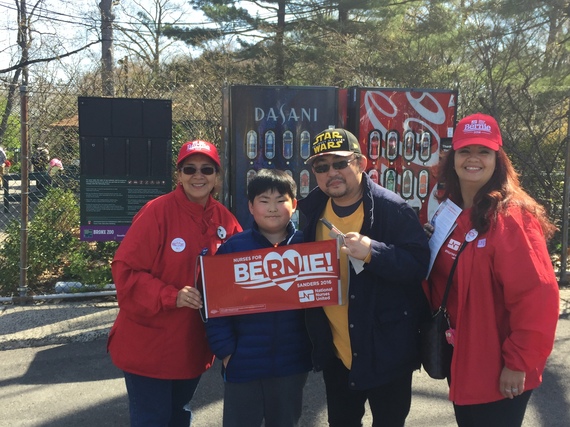 Millions of Americans, including some who have never voted, are excited for the first time, or have not voted for a Democrat in years, have been moved by the promise of his campaign.

They are counting on all of us to get there with them. There's no time to lose.