Lindsay Lohan has had her guest gig on "Ugly Betty" cut from six to four episodes after reportedly clashing with show star America Ferrera and having general attitude issues. Lohan's character went from being Betty's high school nemesis to the present-day boss of Betty's dad at a burger restaurant. The NY Post reports:

One production source said, "It was a mess. Lindsay would show up every day with an entourage of people. She smoked 24/7, and after she left, they had to repaint her dressing room it was such a mess."

In addition, Lohan "would obsessively cut pictures of herself out of the tabloids like she was creating some sort of scrapbook and refused to go on set until America was there - it was a power play."

One episode, titled "Granny Pants," was about how Lohan, playing Betty's high school nemesis, would "de-pants" Ferrera. But Ferrera exacts her revenge and pulls down Lohan's pants instead. "Lindsay wasn't wearing any underwear," the source said.

But a Lohan pal fumed, "Bull [bleep]! Lindsay wears underwear all the time now. She was wearing a G-string. And it was America's fault. They were rehearsing the scene and America wasn't supposed to pull Lindsay's pants down - but she did. Lindsay was so embarrassed, she started crying."

As for the dressing room, Lohan's pal said it was also used by the cast of the Fox sci-fi thriller "Fringe." "So maybe they messed it up. And an entourage? Yeah, she had her sober companion with her, as well as her manager, assistant and [girlfriend] Samantha Ronson. Her publicist was there a couple of times. But so what?"

The pal blames Ferrera for any issues, saying, "America was mean to Lindsay. Producers give her too much power. Lindsay didn't do the last two episodes because America didn't like her and got her kicked off."

Ferrera's rep would only say, "America is grateful to have had her on the show and thinks everyone should tune in to see how great the episodes are."

Lohan's rep said, "Lindsay was scheduled for six episodes and is appearing in four but had a lovely time."

Lohan and girlfriend Sam are far from "Ugly Betty" and are currently in Tokyo, as photographed yesterday (scroll down) at Sam's sister's fashion show.

Lohan guested in last season's finale, as seen below and returned this season. Both clips below:
Season 3 premiere: 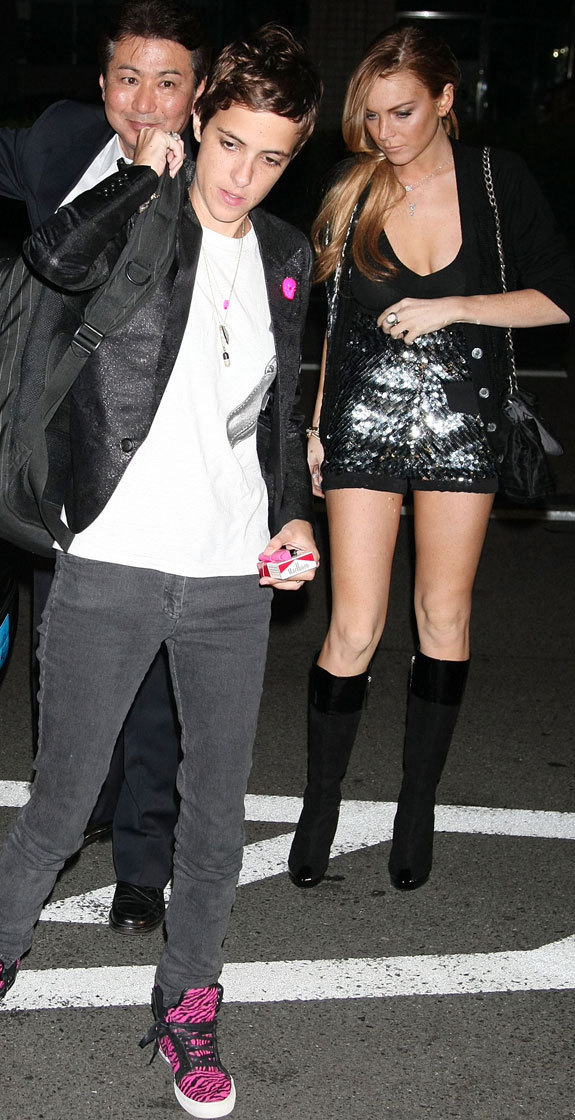