There are some pretty cool bridges all over the world, constructed by engineers to serve not only as utilitarian structures but also as works of art. But when the engineer is simply nature, an entirely different type of product is produced: a living bridge. 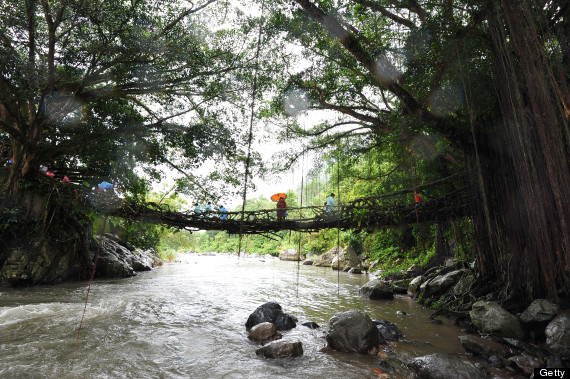 Located over the Batang Bayang river in West Sumatra, Indonesia, a bridge made of living tree roots connects two villages. The bridge, known as ‘Jembatan Akar,’ is 82 feet long and it took 26 years to become the sturdy structure it is today. According to Oddity Central, it was created in 1890 by a Muslim teacher, Pakih Sohan.

He wanted students living on the other side of the river to be able to attend his classes, and made that happen by stringing the roots of two banyan trees around a stem bridge made of bamboo. The bridge has since strengthened with age and is reinforced with wooden planks and steel wires, allowing it to be a popular (and safe!) tourist attraction.

Jembatan Akar is not the only living tree root bridge in the world, though. Check out the root bridges of Cherrapunji, India on Slate.