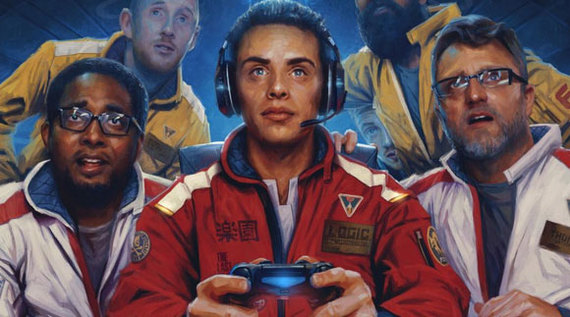 This article originally appeared on DJBooth.

Video games and rappers have a long, complicated relationship. Gaming is still considered rather nerdy, while being a rapper is mostly about exuding your cool, the two intermingling is always an intriguing juxtaposition. I think of Mickey Factz, Lupe Fiasco, and XV as those who have really embraced both sides.

Today, the two communities have once again been bridged. Logic has officially started a YouTube gaming channel. At first I didn’t see what the big deal was, watching someone else play video games and listen to their commentary has always been baffling to me. Wouldn’t it be more fun just to buy and play yourself? So some people are going to watch Logic play video games, so what?

But the same way that the listening experience for music has changed with the ages, so has gaming. There’s a massive amount of people who are watching these channels and find them entertaining and Logic is now able to reach them

Some rappers sell clothes, some rappers sell weed, but what Logic is giving fans is a different kind of experience. It’s possible that the best business move he could make in 2016 is simply playing video games and having a good time.

Gaming is huge online. Twitch, a live-videogame streaming service, was purchased by Amazon in 2014 for $970 million. We can round that up to a billion just so we all understand how big of a deal that is. Business Insider reported when Amazon made the deal there were over 55 million users with over 15 billion minutes of content. The numbers don’t lie, Twitch was huge then and must be even bigger now. This is just the tip of the ice berg.

Twitch is a huge part of the internet, and it accounts for nearly 2% of all traffic in the U.S. during peak hours, according to a report by The Wall Street Journal. Only Netflix, Google, and Apple account for more traffic. In that respect, Twitch even streams more video than Hulu. Twitch also accounts for 40% of all live-streamed internet content, according to Business Insider Intelligence. - Business Insider 2014

Most of YouTube’s top channels are gaming or game related. PewDiePie has almost 44 million subscribers on YouTube, it's the highest subscribed channel. That’s more than Justin Bieber, Rihanna, Taylor Swift, Katy Perry and Eminem. His content varies, but a lot of his uploads are him commenting and playing video games. He’s raking in millions of views per video without leaving his home, no different than what Logic is planning on doing with his channel. It’s possible that he could rack up more views playing video games than dropping music videos.

Impressively, Logic's already up to 100K subscribers in just a day and most of these are probably fans of his music, just wait until he taps into the gaming market. The channel has a really good chance at exploding into it’s own entity. I'm on the wrong side of the internet.

"More than 70 million people worldwide watch e-sports over the Internet or on TVs, according to estimates by SuperData Research. South Korea even has a TV channel devoted largely to e-sports. A championship tournament last October for League of Legends, an arena battle game, streamed around the world, attracting 8.5 million simultaneous online viewers at its peak — the same as the peak viewership for the deciding game of professional hockey’s Stanley Cup finals in June. This year, the League of Legends championship is expected to attract 40,000 to 50,000 attendees to a soccer stadium in Seoul." - New York Times 2014

Logic isn’t doing it for the money, in his first video he stresses that this is about his love of gaming and something that allows him to connect with the fans. I believe him. There has to be a sincere passion for playing. Just like rap, a YouTube channel doesn’t become successful overnight, you can't fake passion.

Logic’s approach is one that might get dismissed by mainstream hip-hop but is a huge step into a community that's exploding. Get enough subscribers and Logic could make more money through his gaming channel than he would from a Sprite endorsement. Everyone’s dream is to turn their passion into paper and Logic is one step closer. All I can say is, well played sir. Well played.

By Yoh, aka LiveYohLive, aka @Yoh31. Illustration by Sam Spratt.