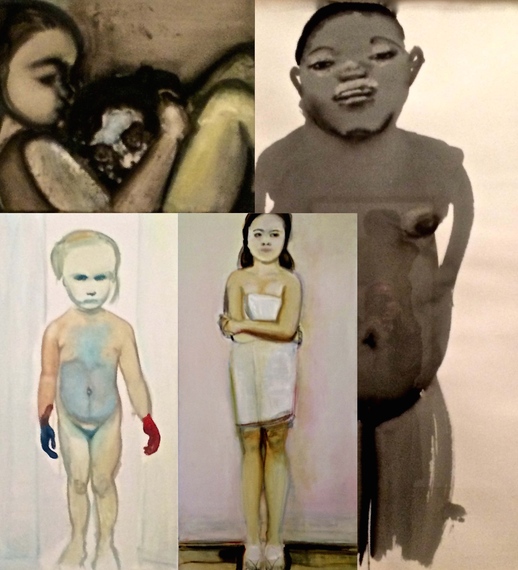 Can genius be hit and miss? Can an artist capture the essence of the human spirit in one image and produce a bad painting in the next? This seems to be the crux of the Marion Dumas retrospective at the Tate Modern. Her rows of watercolour portraits are true evocations of our inner selves -- faces sag and distort to echo the disparities of experience inside each and every individual. They are unattractively alluring, a gallery of "joli-laids" revealed in bold strokes and washes, mirrors of internal conflicts which end up as things of beauty.

But a constant painting off photographic images can sometimes produce a cliché which even the artist herself seems to get bored with. Some of her larger pieces appear to be abandoned in mid-creation, as if once the intensity of the initial subject of interest wears off the rest of the painting is discarded with impatience, like a hobbyist attempting to paint a bunch of flowers only to be defeated by the boredom of petals. Backgrounds are left unfinished and disappointingly unaccomplished. Sometimes it's hard to distinguish between a brave disregard for the trite and an end of year art school show. Other times it's not that difficult.

Those paintings that truly sing with a strength of originality are those that Dumas does quickly, like a Chinese calligraphic line that in one fell swoop denotes an entire landscape. Both emotional and moving they contrast to those of the famous or notorious, such as those of Amy Winehouse or Man Ray's "Glass Tears" which look like a teen's attempts to copy a photo of their idol. The one of Princess Diana, as finished a painting as Dumas is ever likely to do, is bewildering for the wrong reasons.

Yet many are stunning in their artistic irreverence, the very irreverence that makes some pieces less successful. Portraits of her daughter are intimate and knowing; from the naughtiness of a small child to the self-consciousness that comes with early teens. When at her best Dumas' portraits inject a room with heads of colour and distortion that are hauntingly unsettling. These come unnervingly close to being unfinished and yet this is their true potency -- as if the act of living has blurred the sharpness of external features and highlighted the essence of struggle and conflict through discombobulated eyes and mouths. These faces float deliberately bodiless, not so much for artistic effect but because life's buffeting obscures any more definition. Dumas does pain and all its permutations.

Dumas's use of medium -- not a trace of mixed media to impart clever deceits of digital with traditional -- is refreshing and honest.  Her works feel vibrant and of today -- her use of watercolour and paint, on humble paper and canvas, reflect both the poetry and poverty of a South Africa that connects to the raw beauty of its geography and with all that it takes to be alive within it.

Her work is, above all, fearless; many of these pieces are commercially unsellable. Stare at them with unknown provenance and not all of them are appealing. One can imagine some of them languishing at a gallery exhibit. Endow them with the fame of a name and they take on the sheen of artistic legitimacy. Artists of today beware - it's about a compulsion to express through honesty, and trial and error, not through being sick and weird so that one might end up at the Saatchi Gallery's upstairs section.