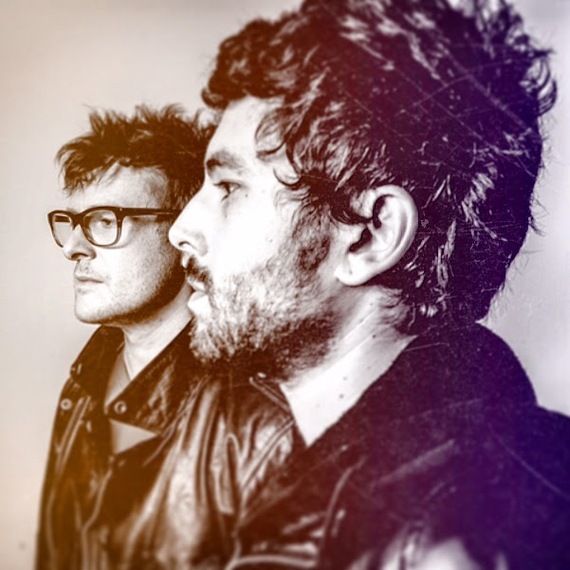 Mackintosh Braun, a Portland-based "electro-pop" group composed of Ian Mackintosh and Ben Braun, are causing quite the stir. And not just in Portland. The band is growing their fan base in a big way. (This girl included!)

Fun fact: Ben's father, Michael Braun, was a long-time drummer for Hall & Oates and has played on a few of Mack Braun's recordings. (I totally just said Mack Braun. We're cool like that now).

Mackintosh Braun has received a lot of TV and film exposure. Their music has been featured on "Gossip Girl," "Grey's Anatomy," "Chuck," "How to Make It in America," and "The Carrie Diaries." The band's track "Frozen" was featured in the 2011 film The Beaver. Their single, "Never Give In," was featured in both the film adaptation of Veronica Mars and on the soundtrack, both released in March of 2014.

So I was reading your Wiki page (true journalism fashion, right?) and I found an interesting little factoid. Ben -- your father was a drummer for Hall & Oates. Is that correct?

Ben: That is correct, yeah!

I thought that was really cool! So does he perform in any of your concerts?

Ben: He used to. I mean, he was a big reason for why me and Ian met in the first place. He was given some music that Ian was working on by a mutual friend, and then I found out about it. And that's how he and I met initially.

But yeah, he [my dad] played with Hall & Oates for about 20 years, from the late 80's up until about 2011. So I grew up around music. I'd go on tours with him as a kid, here and there. And he played on a couple of songs on our last album. He didn't play on our most recent album, but he played live many times with us. Very influential to us as a band.

I can imagine. What was it like growing up and touring with your father? Seeing him perform live? Big cities, big lights. That has to be pretty amazing.

Ben: It was very cool, honestly. I mean, I was always interested in music and he was a big influence on me. Looking up to him and seeing him play on that kind of level. And being on the tour bus...just the whole lifestyle. And just seeing it from a position as a kid, knowing that's where you hope to get to. You know?

I wasn't riding around in a van, sleeping in Walmart parking lots. [Laughs.] So yeah, it's cool to see where you can get, and I always looked at that and told myself, "I want to get there." 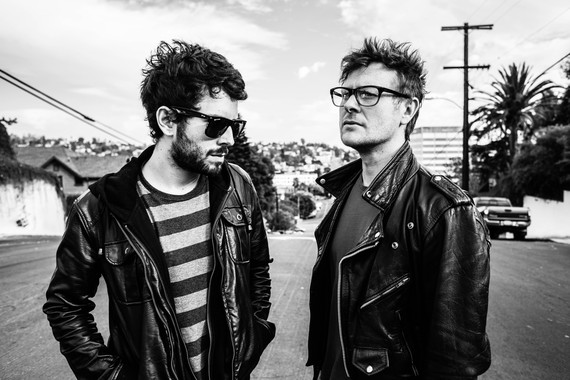 I would think it's a very different perspective seeing the music industry as a child, as opposed to actually doing performances and living that lifestyle as an adult. The preconceived notions you may have had as a kid, seeing your father do something so amazing. And later, doing those same performances yourself. It has to feel a bit surreal. I think that's a very interesting dynamic.

Ben: Yeah, it definitely is! And you know, we're still very close. He's just a very talented musician, and it's cool to have someone like that in my life. I can just call him up, ask for advice, or Ian can ask him a question...He's always around in our studio space, so that's cool too. He's good people.

Ben, Ian -- Did both of you grow up in Portland?

Ben: I moved from New York to Portland when I was about 11, so I spent my younger days in New York and New Jersey. And then moved to Portland and went to high school there.

Ian: I moved from California at a young age but mainly grew up in Roseberg, OR.

Are both of you settled in Portland for now?

Ian: Yeah, we both love Portland. It's a great town to live in. I feel like it helps inspire us in certain ways...it's definitely a cool city to live in.

I've always wanted to visit! And I don't know if people like this comparison or not, but I've heard it's a lot like Austin. Which I LOVE. So unique...there's no place like it. Go-to city to discover great music, awesome food, good brews -- anything really!

Ian: There are definitely a lot of similarities between Austin and Portland. It's a cool spot, we love Austin. We did South by Southwest a few years back. 2010. And we really connected with Austin. We'd like to go back as soon as possible.

You've been together since 2006, correct?

Ian: Yep! [Laughs.] Sorry, it just seems crazy when I think about the fact that it's been almost 10 years. Insane...

It is! When I think of 2006, I think of being in college! And at times, it feels like I graduated college just yesterday. Which definitely isn't true... But we can pretend, can't we?

Ian: Well, now you're making us feel old! We won't get into all that, ha-ha! 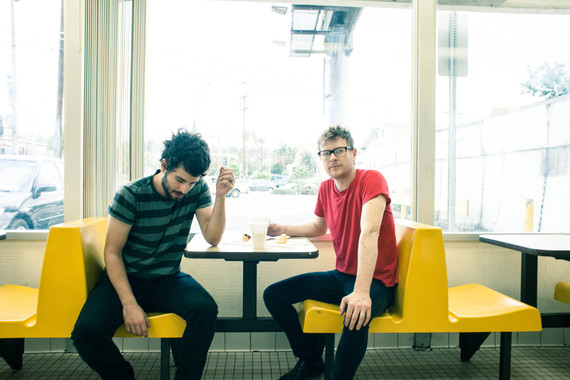 Do you plan on coming to Houston anytime soon? Because you should!

Ben: Ian, what do you think?

Ian: Yeah! We'd love to come to Houston! We haven't actually been to that part of the country, at all. The hope is that more people start to discover our music and the album does well. Then we can start branching out a bit more in terms of where we perform.

Or, we can try to get onboard with a band that's already established, and hope to gain some of their fan base. We'd love to get out there though, for sure!

You definitely should! And I'll be here, so ya better give me a ring, eh?

You have two albums, correct?

Ben: We do. Well we have two albums out. We have The Sound, which we put out independently in 2007. And we put out Where We Are with Chop Shop/Atlantic Records in 2010.

I believe I read that Where We Are was lauded by the Associated Press as one of 2010's most overlooked albums. Is that right?

Which is cool -- it's an impressive statement. Because your music is so great. But it's a weird thing too, because it's like, "Hey. So you guys are super awesome, but no one's listening to you."

Ben: Yeah, pretty much! It's like, "Here are a bunch of albums that no one listens to that you should have but didn't!" [Laughs.]

Ha-ha, exactly! It's still pretty cool though. Your music is definitely great. I've been listening to "We Ran Faster Then" on repeat for days.

I've also read about a potential collaboration with Lady Gaga. How is that going?

Ian: We did have a collaboration in the works -a dance-y remix for a song called "I Can't Give You Anything But Love." [This song was the first single from Gaga and Tony Bennett's jazz standards album Cheek to Cheek.]

Ben: Yeah, Unfortunately, it kind of fizzled. We're not really sure why the plug was pulled on that one, but it was pretty disappointing. We still love her though! I mean, no harsh feelings at all -- she was super awesome on the phone! But we're not gonna lie, we were pretty disappointed it didn't work out.

Understandably so. I have to say, something in the future would definitely be cool. Together, I think you could make a pretty catchy tune!

Ben: We've had the pleasure of playing with some cool bands recently. For example, we opened for the Glass Animals at Portland's Crystal Ballroom in December of last year. The event was called "A December to Remember" for 94.7, a local alternative radio station here. That was a great time, we loved it.

A lot of your music has been featured on TV, films, movie soundtracks...My latest obsession is "We Ran Faster Then." [A single from their album Arcadia, coming out in June.] I've had it on repeat for days. [The song was featured in a recent episode of "Grey's Anatomy."]

You know, I actually didn't realize "Grey's Anatomy" was still on TV...being in it's 50th-ish season and all! Then a colleague of mine came into the office one day, basically sobbing because yet another person had died. Like, one of the main characters! They let MCDREAMY die! How could they?! Ha-ha.

Ben: Yeah, Ian came into the studio. Just bawling. He was just so upset. He had seen the episode and just let it all out. [Laughs.]

Ha-Ha, I bet! Well I guess the positive thing about that episode is that it let a lot of people know the show is actually still on the air.

Ben: Exactly, there ya go!

Ian: Yeah, we had a great relationship with Grey's. It worked out really well.

What are 2-3 bands you would say you are most inspired by, or you draw a lot of inspiration for your melodies?

Ian: James Mercer from The Shins, for sure.

Ben: Led Zeppelin. Also, I'm really inspired by the singer in Mew. They just came out with a new record [The name of the album is +- (pronounced Plus Minus). Mew performed at South by Southwest in Austin this year as well.] But we've been a fan of them for a long time.

I grew up on Led Zeppelin. I was just very inspired by his attitude. He just...he owned it. He just didn't give a shit. I was inspired by him just being this great rock star.

Any other musical inspirations?

Ben: The Beatles for sure, goes without saying. And the Midnight Juggernauts are just a really awesome band. Their album Dystopia totally inspired us.

So what are you guys up to now?

Ben: We're just in the studio, rehearsing for our next gig and we're doing kind of a special thing. Our album won't be out until June [Arcadia] but our show on May 14 is a cool way for fans locally to be able to get the record before the actual album comes out. We're going to have exclusive vinyl at the show, and CDs and stuff so it's gonna be cool for local fans.

For sure. Sounds awesome.

So there's one more question I usually like to ask. For both of you.

Ben and Ian: Sure.

If you could kick back and have a beer with anyone in the world, living or dead. To chat about anything. Who would it be, and why?

Ian: Well...to talk to her about many things! Mainly politics. But really, anything.

Ben: Mine, I thought was going to be hard. But without a doubt, Larry David.

That would be pretty great.

Nothing like some good old fashioned deli-noshing. Great answers, guys!

Take a peek at their Facebook page and check 'em out on Soundcloud. Kick back, relax and jam the day away.

Many thanks to Ben and Ian for doing this interview with me! Original article posted here. Photos courtesy of Jen Rosenstein. Special thanks to Golightly Media for being awesome. Interview conducted by Lauren Kruczyk.