I believe the MakerBot 3D printer is going to change the way people fix things, but also how they think. The MakerBot opens up a world of opportunity for children, adults, creators, thinkers, and overall anybody who is interested in creating something that want to see physically. I have this image that one day everyone is going to have three basic copying machines in a room, one replicator type device for repairs, one automatic sewing machine for clothing and such, and one organic paste/flavoring machine which will "print" food. A machine such as the MakerBot will change the entire world in such a way that has never happened before. The MakerBot will open peoples' imaginations to a world that had never been available to them before it. 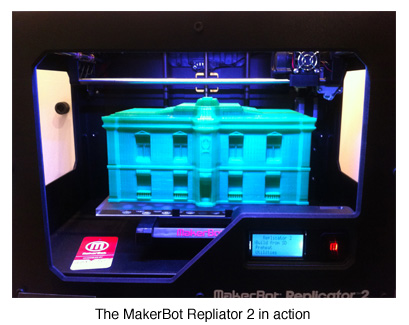 Not only is MakerBot in the world of 3D printing, there are also shapeways and delta. All three of these companies have their own unique way of printing. MakerBot is more for aesthetic, fun little things such as houses, cars, and decorations. Shapeways uses more materials like metal, and prints out whatever shape by taking the metal, which has been pulverized, and heating it up and printing it out as a paste-like material. Shapeways also uses softer materials such as plastic and a styraphome, plastic mix. Delta prints the same material as MakerBot, the same plastic as Legos, but has a different design. The delta design is three metal towers that are all equidistant from each other, and there are three more towers going at a downward angle towards the inside base of the machine. The three towers all connect to the actual head of the printer, and it moves by slight movements of the angled tower on the stationary tower going up and down. I can only imagine a set up of three cranes around a building site with three towers all connecting to the cranes and a cement extruder or whatever material was placed in the machine to be "printed." This is essentially printing an entire building, which would theoretically cost less, have less risk of the workers and is far more efficient. 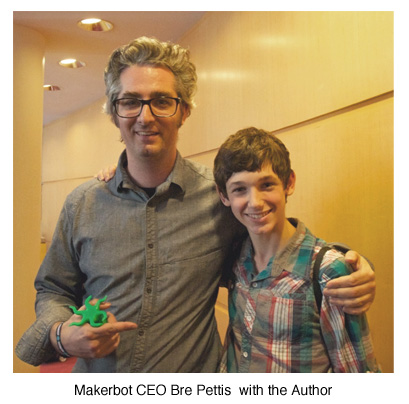 A eighteen-year-old senior at Columbia Prep in NYC