Note from the bloggers: As fellow music lovers and advocates for improving maternal health, we're joining our voices to let you know about a new CD that will help make a difference in women's lives around the world.

"Daddy, Daddy," a little girl calls out in the background. The strumming of an acoustic guitar begins and then gives way to a familiar, rough-hewn voice.

"All of my life, from beginning to end, what I'll remember is holding your hand," he sings. "All that I cherish is the time that we spent, me and you skipping, throughout the land."

The song evokes images of the pastimes enjoyed by fathers and daughters, but its sentiment about the unique bond between a parent and child transcends both gender and time.

Vedder's exclusive recording of "Skipping," part of the Every Mother Counts 2012 CD compilation available today at Starbucks, is one of nineteen tracks donated by some of music's biggest names to ensure that holding hands -- and other simple pleasures of parenthood -- aren't thwarted by complications from pregnancy and childbirth. 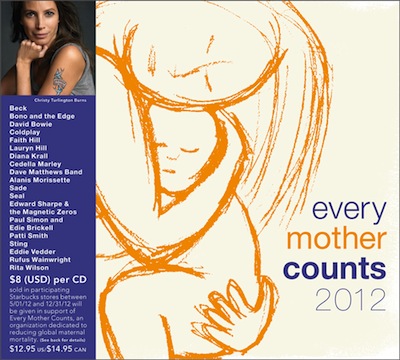 Did you know that every 90 seconds a woman dies from pregnancy-related causes (of which up to 90% of deaths may be preventable)? Although Every Mother Counts is dedicated to increasing education and support for reducing maternal mortality through programs and partnerships around the world, the movement isn't just for women... which is why dads like Vedder, along with Bono and the Edge, David Bowie, Seal, Dave Matthews, Sting and Rufus Wainwright have joined moms Faith Hill, Diana Krall, Alanis Morissette, Sade, Lauryn Hill and others on this second CD effort to shout (and sing) about saving lives.

From Cedella Marley's flute-inflected version of her dad's classic, "Get Up, Stand Up" to Beck's spartan folk take on "Corrina, Corrina," Every Mother Counts 2012 is both thematically coherent and stylistically diverse. 13 of the 19 tracks were recorded or re-recorded specifically for this CD, which means Coldplay's "Yellow" isn't a version you already know and, conversely, the brand-new "Pretty Day" by Paul Simon and Edie Brickell might get you singing along instantly. Each song is a gift from the artists, given in honor of mothers everywhere.

Below, a few thoughts on the sounds and stories from the playlist:

Christy: Patti told me she wrote this song years ago, after seeing a segment on the news in which a child literally died in the arms of its mother. That memory was still very present to her in 2011 during the crisis in the Horn of Africa, so she thought, "If I could give this mother what I have -- fruit on the trees, a healthy child -- I would." She went into the studio and brought along her daughter, who's now grown and married, to play piano, and gave us this version of the song.

Kristi: The sparse arrangement and earnest vocal are arresting, especially for those who aren't acquainted with Patti Smith's catalog. Reflective and beautiful.

Christy: I got to hear some of the songs Rita and Patti Scialfa were recording for her new album AM/FM, which comes out on May 8. I already knew Rita could sing -- she's one of those talented people who can do anything -- and her voice sounds amazing on this song.

Kristi: It's prescient, too, since she recently appeared on NBC's Who Do You Think You Are?, where it was revealed that her father's first wife died tragically after childbirth from eclampsia gravidarum, a dangerous pregnancy-related condition. (The actress is also editor-at-large for Huff/Post50.)

Christy: Alex Ebert saw my documentary (2010's No Woman, No Cry) and was really moved by it, so he went into the studio to record something new for this CD. He actually put music to a poem he wrote and it turned out so personal and intimate. The band shot a video for the song, too, with their mothers, which will be released next week.

Kristi: What I love about this one is that the words are contemplative, but the groove is almost hypnotic, with a late-1960s/early-1970s psychedelic vibe.

Bono and the Edge: "Original of the Species"

Kristi: U2 is one of the few bands whose words and melodies aren't obscured by the complexities of their arrangements. From a parent's perspective, it's nice to hear this anthem to human individuality sung as advice to a child -- "You are the first one of your kind," indeed.

Christy: Bono wrote the song with his daughters in mind. It's wishful and imparts the idea that, "I'm here and I'm watching you take your steps forward and I'm supporting your independence, but at the same time, I don't want you to make mistakes." Any parent can relate to that.

Every Mother Counts 2012 is available at Starbucks locations across North America beginning May 1 through December, 2012 or while supplies last. $8 from the sale of each CD goes to support Every Mother Counts' partner programs in coffee-growing countries. For more information, click here.