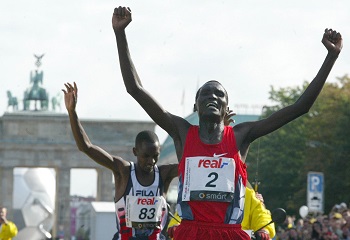 Paul Tergat raced to victory in the 2003 Berlin Marathon. Then again he took first in the 2005 New York City Marathon. Tergat held the world record in the Marathon for years. He has won countless races including Cross Country titles and two Olympic Silver Medals.

How did he achieve all this? Training and hard work, yes. But something more than that. Tergat credits the school meals he received as a child growing up in Kenya. These were meals provided by the UN World Food Programme (WFP), the largest organization fighting global hunger.

I interviewed Paul on Thursday, one of the nicest people you can talk with, and a great sense of humor. Earlier he was stuck in the Washington, D.C. traffic, which unlike the government is not shut down. He wished his running shoes were with him, it would have been quicker to get around.

Tergat is in D.C. this week advocating for school meals for children around the world. Tergat knows best. He says without these meals he could never have achieved this amazing career as a runner, or as spokesperson and leader. He has become all those things because someone cared.

When Tergat was just seven WFP started bringing meals to his school, which was in an impoverished area of Kenya. The food was cornmeal as he recalls. It made such a difference to him and the other students. In fact, some of his classmates have gone on to become doctors and teachers.

With meals at school, it can give children a chance to fend off hunger and the opportunity to concentrate on learning. Tergat and his class are proof of that. So it's no secret Tergat is advocating for school meals for children around the world.

He has met with members of Congress this week calling for more funding for the McGovern-Dole school meals program. This program currently is helping Kenya and other nations with school meals using relatively little funding. Food aid overall makes up less than one tenth of one percent of the federal budget.

Tergat is speaking at American University and George Washington University this week before winding up Friday with an event called The Role of School Feeding. This event will be hosted by the World Food Program USA and Catholic Relief Services. Both organizations are supporting school meals in Mali, another country devastated by poverty and war.

Tergat encourages students to find ways to support the work of the World Food Programme, and contribute what they can. Tergat is also supporting racing opportunities for children back in Kenya including competitions between towns.

We also discussed Charity Miles, a great way to run and support the World Food Programme using this free app.

I think what people can do, seeing his example, is to continually advocate for feeding children at school. So many times this basic meal gets lost in the shuffle with everything that is happening in government and around the world. Sometimes members of Congress even vote to cut school meals. That should never happen.

We all benefit if children get the opportunity they deserve. For children living in hunger and poverty, just getting some food at school changes their lives.

How many great runners and stories of inspiration never come to be because of hunger and poverty? This is something Paul Tergat realizes and carries with him. He made it. A helping hand was there to give him food which became the foundation of his success.

When WFP asked Paul to be an Ambassador Against Hunger in 2004 he jumped at the opportunity. He has never stopped running in a sense to achieve this goal of school meals for every child in the world.