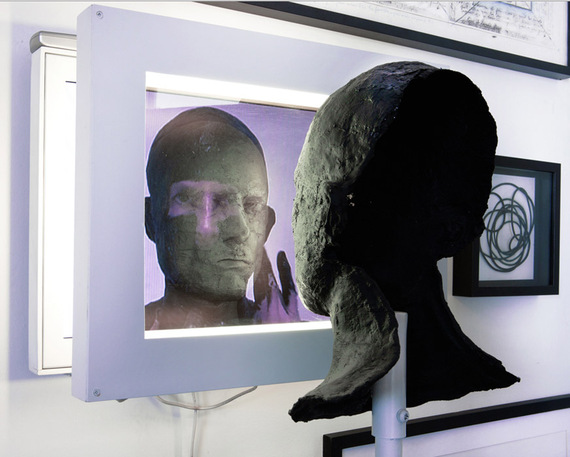 Intermedial artist Marc Fichou's new installation OUTSIDE-IN at Chimento Contemporary offers the closest thing you can get to a look inside another person's mind. A series of large-scale panels, augmented by discrete wall works and proximal sculptural objects, are arrayed in an obsessive frieze of cross-referential, non-linear vectors and clusters which interpretively document the artist's ongoing research into the nature of reality. Fichou seeks to achieve a paradoxically solid expression of the fluid mental, creative, neurological process of unending in-between that is human consciousness, using finite tangible forms and imagery. Though he has made and continues to execute works of sculpture, photography, drawing, collage, assemblage, architectural installation, video, and more -- all of which is maximally represented in "Outside-In" -- the throughline of his practice is ontological rather than aesthetic or stylistic. Rooted in the philosophical study of the fluid state of becoming and the elusive parameters of what is considered as reality, and despite the patient, impressive craftsmanship he employs in its service, his true subject is the non-material spark of ideation itself. 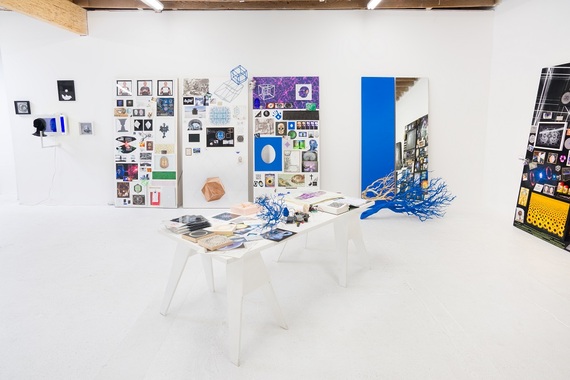 With visual-cultural resonances ranging from Edward Steichen's " Family of Man" to da Vinci's notebooks, a Darren Aronofsky storyboard, and what could be Stephen Hawking's Pinterest page, the installation is a kaleidoscopic, operatic archive of appropriated images from art history and theoretical math and physics, material studies in digitalia, stone, and polished wood, experimental calculations, photographs, scrawled annotations and a vertiginous, theory-of-everything compendium of research-project fodder culled from sources both internet and arcane. He also has a fondness for rhizomes and tesseracts, origami and fractals -- varieties of meta-narrational diagrammatic confections emblematic of a merger of art and science that is much more accessible by visual rather than verbal means. In this conceptualist-leaning way his work is process-oriented, and the concrete, finite forms he makes represent a kind of compromise, frozen moments which contain their own history and interpretive potential but which obscure their esoteric origins with their own necessarily fixed existence. 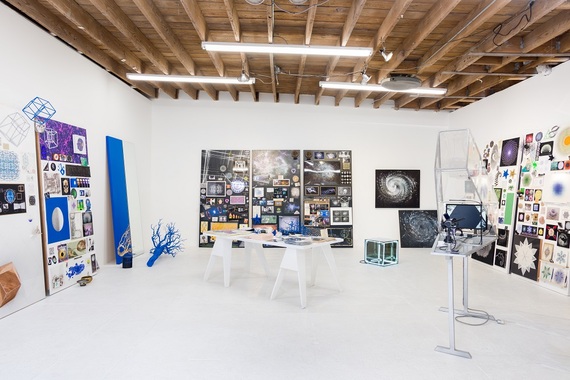 In a way, it comes down to one poetically tautological question: What do ideas actually look like? Fichou's eclectic, materially diverse practice, in which "finding a form becomes the form itself," echoes the uncertainty principle and the so-called "observer effect" -- in which it is posited that the mere act of observation indelibly alters the character of the subject. Furthermore, since it is an ongoing "research project," the exhibition will initially include a pair of blank white panels, which the artist will fill with new materials throughout the show. As the content itself continues to change and expand in as yet unknown ways, Fichou embodies and actively demonstrates the principle of constant flux which animates human and cosmological creativity rather than explaining it with didacticism, keeping the energy of constant change and open-ended interpretation alive in the viewer's experience. 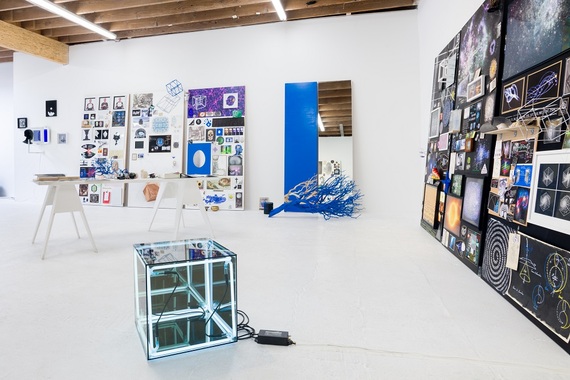 OUTSIDE-IN is on view at Chimento Contemporary in DTLA through July 16.

Sculpture Arts Installation Art Conspiracy Theories The Theory Of Everything