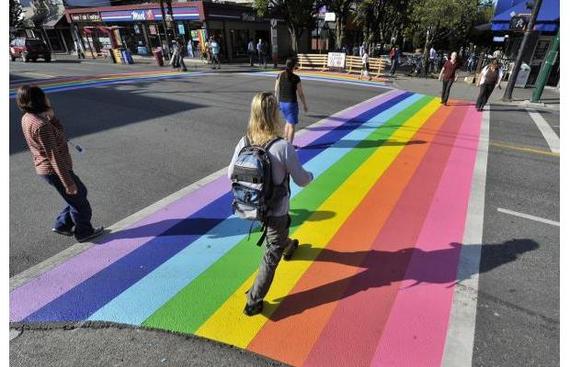 How did a campaign to create the largest march for equality in history gain so much momentum, so fast and actually manage to be hip and user-friendly in the process?

The answer behind March To Equality's (MTE's) meteoric rise in the news lies in a winning trifecta: A fun initiative--an app that makes it easy to engage along a strong list of Ambassadors and Allies; and a bold idea to unite citizens around the globe in supporting full Lesbian Gay Bisexual Transgender equality.

The genesis for MTE emerged in Europe back in fall 2014 when Stephan Anspichler of Berlin, Germany, noticed that the daily news had increased its reporting on the progress of the LGBT movement in the United States. Also, as a film producer, he had a 2015 film release schedule right in front of him.

"I realized how many LGBT related movies were about to conquer cinemas," Anspichler explains. "The Marriage Equality Act was about to come to fruition. Everything just happened to be in the right moment. And then, history told us that the 50th anniversary of the Stonewall Riots was just a few years away from us. So, we started to spin our heads around a campaign that leads up to Stonewall, 2019, and at the same time would engage people in countries all over the world to be part of an important legacy, which is not nearly as far progressed in many places than here in the United States."

The MTE mission: To collect 50 million "steps" through a virtual march, which allows supporters anywhere around the globe to demonstrate their support for civil rights -- across the board. However MTE's hope is to significantly raise awareness for LGBT equality and, as it notes on its website, "engage activism in the pursuit of human rights worldwide."

Participants who add steps toward MTE, also add a voice in solidarity with the movement. "The work towards full LGBT equality is still far away," MTE's website notes. "Homosexuality is illegal in 76 countries, and in some places can result in being sentenced to death."

MTE is certainly generating buzz. It doesn't hurt that it is designed to lead up to the 50th anniversary commemoration of the Stonewall Riots in New York City (June 28, 1969). To that end, MTE will spearhead and participate in events that will take place on June 28, 2019 in New York City. By that time, MTE anticipates having gathered enough steps to circumnavigate the globe.

So, here's where the fun, inventive part comes in.

Participants log their real-time "steps" taken everyday via the app. Walk down the street -- log in a step! Go jogging? Log those "steps." Participants also have the option to post a photo or video. When you add a step to MTE, you won't be exposed; it remains a discrete initiative that doesn't require logins, if you don't want to, and makes you choose if you want to share your participation in social media or not. Hashtags are encouraged. Simply type in "#MarchToEquality" and let others know that you are part of this important legacy...

More than 2.6 million "steps' have already been registered as of this writing. (The campaign launched in September 2015.)

"The research in the project clearly had an addictive effect on me towards everything that happened in the equality movement, no matter if it was related to women's rights, the black rights movement, or the development of any other human rights movement out there to date," Anspichler says. "It's exciting to see how society needed to develop to find to the point where acceptance was closer than competition and hatred towards the 'unknown.'"

MTE had already been invited by the United Nations to be a supporting organization at their Free and Equal campaign examining human rights violations and LGBT equality. In spring 2016,
the campaign was invited to attend Economist Magazine's Pride and Prejudice event in New York City. The event made a strong business case for LGBT outreach and inclusion in all successful corporate marketing strategies. An extraordinary achievement for the young campaign that was joining the 24 hours event as official supporting organization that was live streamed from Hong Kong, London, and New York City.

And the next major milestone MTE would like to reach?

"We want to expand our network of Ambassadors," Anspichler says. "We had Global Ambassadors doing an initiative with us. Our next milestone will be to have local Ambassadors around the world that lead local initiatives."

But more than that, MTE wants to promote and support the "amazing work that nonprofits do for the LGBT community," Anspichler says. Since the campaign launched the app in October 2016, organizations can present their cause via the app. Users may engage with these organizations and donate to their favorite organization by buying steps. The value of each step is 50 cents. (50th anniversary, 50 million steps, 50 cents.) Every donation made will be used to expand the services for the community each organization serves," Anspichler says.

Still, every good campaign just begs for a proper theme song. You know ... just to keep the momentum going. So ... what song would be a good fit here? "I'm Walkin'" by Fats Domino? Perhaps.

Maybe it's best to do the math first. Promote empowerment and a love for humanity/civil rights + stomp out prejudice and oppression in the process. Add it up, draw a line under it and the sum smacks of ... "These Boots Are Made For Walkin'."

Yes. That could definitely work.