Pairing up and paring down, by race/ethnicity and class.

Social scientists have been talking about a "retreat from marriage" for at least 20 years. The overall pattern is a decline in marriage and rise in cohabitation, a delay in marriage to later ages, and high rates of divorce (even though overall divorce rates are well below their historic highs, they remain high).

With the possible exception of divorce (for now), the
recession
seems to be hurrying this process along dramatically, as has been
widely reported
. As usual, there is a symbolic milestone to point out: never-married 25-34-year-olds now outnumber those currently married for the first time.

The National Center for Marriage and Family Research just released two quick reports based on the latest American Community Survey from the Census Bureau, one on divorce and one on marriage. To me the most dramatic contrast in those reports is the race-ethnic divide, apparent in both marriage rates, which show African Americans with by far the fewest marriages per never-married woman...

...and by far the highest rates of divorce (expressed as divorces per 1,000 women in first marriages):

Advertisement
These wide race-ethnic disparities are partly explained by income and education differences. A
new report
from the Population Reference Bureau (PRB) shows that the "retreat from marriage" is much more pronounced among those who haven't finished college -- especially in the last 20 years.

Still, the causal stories are not so simple, as recent academic reviews of both marriage and divorce make clear.

One issue beyond income and education is the within-race gender imbalances in urban areas with high concentrations of African Americans -- which, combined with low rates of intermarriage, make for very tough marriage markets for Black women: 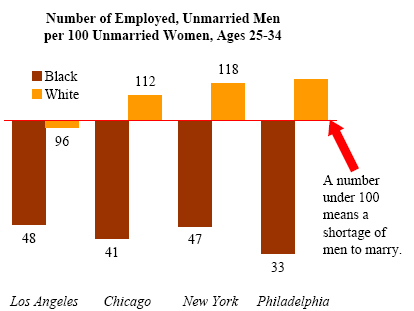 The PRB report is pessimistic about the consequences of this recent rapid change:

...most researchers agree that marriage also has an independent, positive effect on well-being. Therefore, the recent decline in marriage may contribute to worse outcomes for less educated individuals [and their children -PNC], beyond those resulting from the recent recession.

Using politics and policy reverse long-term tides in marriage and family behavior is not effective. And attempting to build/rebuild families to address the consequences of poverty and isolation risks contributing to bad things -- including stigmatizing gays/lesbians and single parents, and ignoring the needs of those who have no families. The retreat from marriage is only as harmful as the social circumstances of non-marriage, which are mutable.